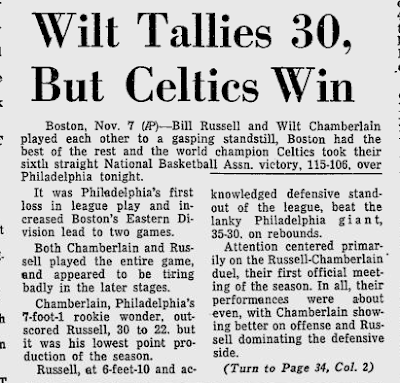 A year and a half before this particular Famous First, even as the GOAT was navigating his way through his very first NBA playoff series, his chief rival-to-be was squaring off in the NCAA Semi-Finals with the defending national champion USF Dons, whose roster by then featured Bill’s older brother Charles (who’d served a hitch in the military before pursuing his university degree).
Charles Russell would provide coach Phil Woolpert with a couple of points and rebounds per game off the bench over 43 appearances during his two-year stint … before going on to a distinguished and award-winning career as a playwright.

The first of the 142-episode “Bill vs Wilt” saga was staged with far more fanfare – not to mention a sellout crowd of 13,909 at the old Garden – 22 days into the GOAT’s third season. 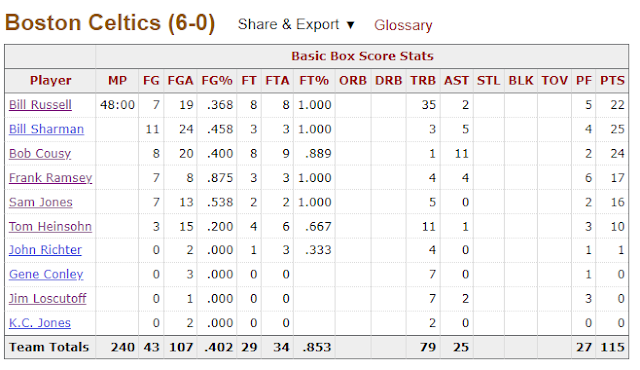 Prior to Russell, the NBA game had consisted of little more than men running up and down the court making layups. But because Russell blocked layups so effectively, players had been forced to create a wider range of offensive plays and tactics … the game immediately becoming more complex, varied and challenging for the players, and more involving and fun to watch for the spectators, and the late fifties became known as the Russell era. 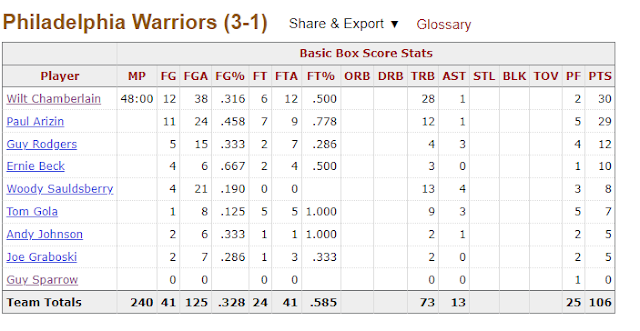 The singularly muscular offensive style of Chamberlain … amazed fans by leaping up to the rim, taking a pass over the outstretched hands of the defending team, and then, still rising into his jump, actually shoving the ball down into the basket … it was becoming a game played in the air.