Boston Celtics welcome Houston Rockets to the TD Garden on 23 November. It will be the second meeting of the teams this season.

The Celtics edged the Rockets in that first fixture at Houston. They’ll be looking for a repeat performance this time around. But it was a close affair and an upset could be on the cards if the Rockets keep mistakes to a minimum and find the confidence to break their crippling losing streak

Below, we’ll take a look at the recent form of both teams, review their previous clash and check out the latest odds and predictions to give you an edge when placing your bets.

Rockets and Celtics – odds and predictions

Both teams’ rosters have changed considerably over recent seasons. The Rockets have lost the likes of James Harden and Russell Westbrook, and for the Celtics, Kemba Walker and Kyrie Irving have moved on.

While Boston’s team are beginning to look settled, Houston’s still appears to be finding their way. The Rockets are on a losing streak stretching back to game three of the season, when the Celtics beat them 107-97.

Many of the big-name bookie’s favourite are the Celtics, who have come into good form of late. If you shop around, there are a number of free bets on 888, precisely the sort of thing you’d be after if you’re keen to back Boston. And after a 10-point victory last time out, a handicap bet may give you better odds. Lots of online betting sites offer this, so keep an eye out.

Boston have gotten off to an unremarkable start this season, sitting mid-to-bottom of the Eastern Conference.

Things could be quite different, however. Four of their games have gone to double overtime and in others, they’ve just been edged out – witness Luka Doncic’s incredible three-pointer on 7 November, in particular.

What we’ve seen in the past few games, however, is a team and a head coach learning from their mistakes.

Boston have stepped it up a gear defensively in the last few games – a welcome sight after a somewhat spineless effort on the defensive end in the past few seasons.

Since the defeat to the Chicago Bulls on 1 November, the Celtics restricted the Magic and the Heat to 79 and 78 points, and the Raptors to just 88.

Brown’s absence has encouraged others to step up, and it’s not Jayson Tatum who is leading the way, but his supporting cast.

Robert Williams has become a force at both ends of the court. The Timelord, as Celtics’ commentator Brian Scalabrine affectionately calls him, has been averaging two blocks per game, as well as 5.2 defensive rebounds. As for the offense, he’s averaging 10.8 points per game and 4.3 offensive rebounds.

Dennis Schroder is another player who has stepped up in the last few games, hitting an impressive 38 points in the overtime win over champions Milwaukee Bucks. In Brown’s absence, he has become one of the Celtics’ leading shot takers, sinking threes and dancing his way to the glass. He’s averaging 17.4 points per game.

The Celtics look more of a team than they have done in a while, winning four of their last six games. If they can keep up their good form, and with a lively TD Garden behind them, the Rockets are in for a tough night.

Houston is rock-bottom of the Western Conference, with just one win so far this season, which came in their second game against Oklahoma City. They’ve since lost every match.

One of the biggest issues for the Rockets is turnovers. In all of their games so far this season, they’ve turned the ball over 11 times, and in five of those fixtures, the number has been over 20 (with 25 being the record).

Offensively, the Rockets have been decent, only failing to hit over 40% of field goals in one of their games. That was against the Utah Jazz, one of the best defensive teams in the league.

Forward Christian Wood leads the scoring for the Rockets this season, averaging 16.9 points per game. Rookie Jalen Green isn’t far behind, with 13.8.

These teams met at Houston back on 23 October, in game three of the season. Boston managed to secure their first win under new head coach Ime Udoka, battling back from an early Houston lead to win 107-97.

That victory was, in part, down to 18 turnovers by the Rockets. Other than that, the teams were well matched. Neither were on form shooting-wise, failing to surpass 45%, but the Rockets edged it from beyond the arc, hitting an impressive 43.8% of their three-pointers, compared to Boston’s 31.9%.

The Rockets will take heart in the fact that they started and ended well, winning the first and fourth quarters, but they fell away in the middle of the game and gave up far too many points. 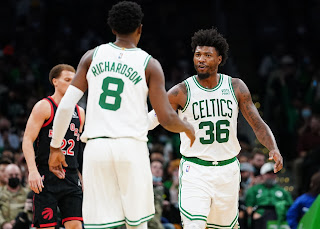 Houston will also be looking for more from its bench. The last time these teams met, the bench managed just 14 points, compared to Boston’s 31.

And Houston will be hoping that rookie Jalen Green can repeat his 30-point game, while Boston will once again turn to young star Jayson Tatum, who sank 31.

The last time Houston beat the Celtics was back in March 2020, when Russell Westbrook and James Harden combined to score 62.

Injuries can sway any fixture and this clash is no exception.

Barring setbacks, Boston should welcome Jaylen Brown, who has been out with a hamstring injury, back to the team. But other than that, the full squad is available.

The Rockets are without John Wall, who is not expected to play this season due to injury.