Last postseason the very injury riddled Celtics lost to the Brooklyn Nets in 5 games. Tonight Boston was close to full strength and Brooklyn was of course playing without Kyrie Irving, but the Nets showed that the Celtics weren't at their level for four quarters.

The Nets had a balanced scoring attack with Kevin Durant, James Harden, and Patty Mills all scoring over 20. Mills actually was the game high scorer with 23.

Both Jayson Tatum and Jaylen Brown struggled from the floor, shooting a combined 9 for 31 and only scoring 28 points combined. Marcus Smart led the Celtics with a team high 20 points and 8 assists.

Udoka says effort wasn't there tonight from the C's. Kind of weird that BOS would pick tonight to take a night off, but here we are. pic.twitter.com/g8gCrfytf1
Hope everyone has a Happy Thanksgiving and the Celtics will look to get back to their winning ways on FRI vs the Spurs

This concludes the Celtics four game homestand and they will spend tomorrow with their families before heading off to face the Spurs in San Antonio on Friday. The Celtics record now stands at 10-9.

Durant said he was exchanging in friendly banter with Ime Udoka during the game, and that he grew close with him over last year with Brooklyn and then with Team USA. Said he always enjoys winning here, because it’s a tough place to play, but Udoka being here “makes it sweeter.”

Al Horford on Nets: "We gave them too much respect, in my opinion...It's a good learning experience for our group." 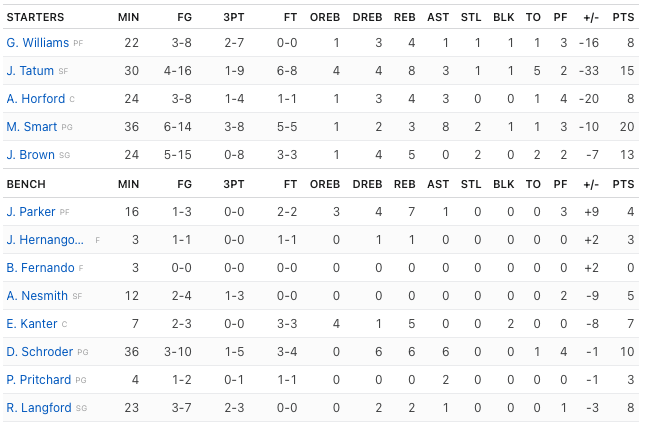