5 solutions for Tatum, Brown, and Smart to win together

The media sure loves a sound bite or a controversial line. When it first was reported that Marcus Smart said that Jaylen Brown and Jayson Tatum need to pass more, it sounded like shots fired. But when the full quote came out, it was much more benign, even helpful.

I still don't like this stuff to be aired in the media, but if Smart is expected to be the de facto captain of this team, it should be said. Next time, hopefully behind closed doors.

Make sure you read the whole quote in there. https://t.co/eE76xLuO2G

Unpacking this though the question remains whether Tatum, Brown, and Smart can coexist in your starting line-up. Before going nuclear and trading a Tatum or Brown, it's worth exploring what could make this work. And trading Smart is no longer an option after his extension. Pretty sure the Celtics aren't even allowed to trade him, Richardson, or Time Lord for this entire season due to their extensions.

Don’t think that’s the case. If BOS wanted To trade Smart they wouldn’t have given him the wealthy extension + trade kicker. They would have either signed him on a more team friendly deal or traded him as an expiring contract. Once BOS gave that extension his trade value tanked https://t.co/0HEBckSUJ2

So here are some options: 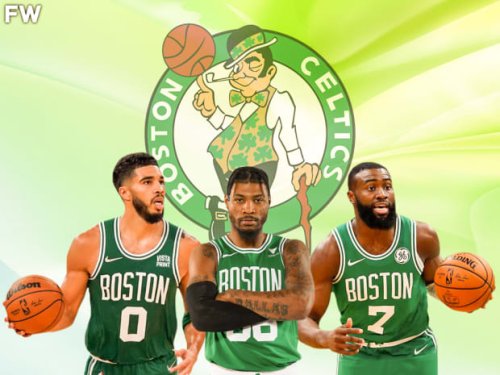 1. JAYSON TATUM GETS OVER HIS SHOOTING SLUMP

An easy fix to problems is to win. Jayson Tatum has began the season shooting a much worse percentage than in past years. That will straighten itself out. He's in a slump. We've seen this with Kemba Walker in recent years. Guys get over it. More Tatum made baskets mean more wins. If Jayson had shot his regular percentage this season, the team would be 3-4 or 4-3. And no one would think the sky was falling so hard.

2. JAYSON TATUM ACTUALLY LISTENS TO THE ADVICE OF SMART, STEVENS, AND UDOKA AND BECOMES A MORE WILLING PLAYMAKER

If you're going to start Smart at the point that means you need a plus playmaker elsewhere in the starting line-up. Gordon Hayward would be a good option, but he's gone. Jaylen has improved every year as a playmaker, but this is kind of on Tatum as the franchise player. Do you want to me a Carmelo Anthony and score the most points? Or be a LeBron/Larry Bird type.

3. SMART MOVES TO THE 2 GUARD POSITION AND BOSTON BRINGS IN A PASS FIRST POINT GUARD

This is what they should have done last season. They should have traded for a Lonzo Ball or Ricky Rubio. Or gone all-in on that 2020 Warriors pick and drafted LaMelo Ball. This offseason their options were more limited due to base year compensation rules making a Lonzo deal much more complicated and LeMelo obviously being untouchable. But Rubio was there to be had. Could have gotten him instead of Josh Richardson.

While Rubio wouldn't likely be the long term answer at the point guard position he could have changed the culture of Celtics ball movement... or lack there of. He's likely still very much available.

4. BENCH TATUM AND/OR BROWN IF THEY ARE PLAYING ISO HERO BALL

This would be a dangerous decision on Ime Udoka's part as young stars today are used to being extremely coddled and are very sensitive. But if Brad Stevens and Ime Udoka both think that there is solid playmaking starting point guard in Marcus Smart's body they need to enable him. Smart can't make plays and get assists without the ball.

The idea here would be that after a few benchings the Jay's would get the point and they would play less hero ball and let their point guard run the offense.

5. MARCUS SMART BECOMES A VERY UNSELFISH PLAYER WHO EARNS THE UTMOST RESPECT OF THE JAY'S

Basketball players prefer passing to teammates who are likely to pass back. Right now Tatum and Brown I'm sure still have their own memories of Smart playing here ball in way too many games in years past. Might just take some time and a serious dedication to unselfishness from Smart to get his star teammates to trust that he will choose them over him nine times out of ten.

So there are five options. If you can think of more, feel free to comment below. As I said, you can't trade Smart this season due to CBA rules. Splitting up the Jay's would be extremely dangerous, unless you were getting back a young star on their level. Swap Jaylen for Beal these first 7 games, and the record would still be 2-5.