The Celtics disappointed the Boston fans in their home opener getting trounced by the Raptors by 32 points. New head coach Ime Udoka used the word "punked" for the beat down.

Udoka: “One thing you can’t stand as a coach is to get punked out there. They basically came out and punked us, outplayed us.” #Celtics #Raptors

Not sure if there's anything good I can say about the Celtics performance, but Al Horford did have a double double in his Celtics return (4 blocks as well). Jayson Tatum shot much better, but this time Jaylen couldn't hit.

Josh Richardson contributed 12 points off the bench, while Marcus Smart was held scoreless for the whole game. 0 points and 0 rebounds for Marcus in 29 minutes, but at least he had some nice dimes.

The Raptors had six players score in double figures. They were led by rookie Scottie Barnes who had 25 points and 13 rebounds. This was an ugly night for the Celtics and frankly very disappointing considering it was the home opener and only Udoka's 2nd game. Not sure how effort could be an issue, but it was.

Ime Udoka on the Celtics getting booed int he home opener:

"You take that, embrace it and use it as fuel. We deserved it by the way we played and our guys know that. That's what we appreciate about the fan base." 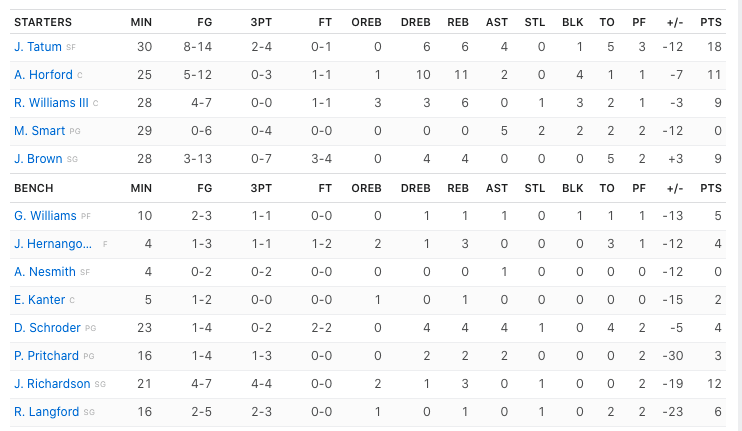