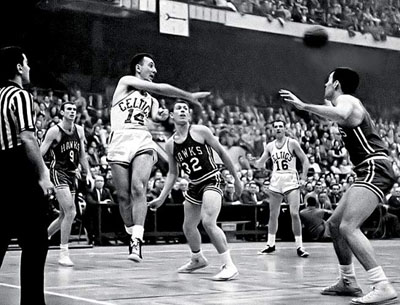 The NBA was constructed – it seemed, at times, to be one brick at a time – by the persistent and competitive drive of resourceful men like Ben Kerner and Red Auerbach. 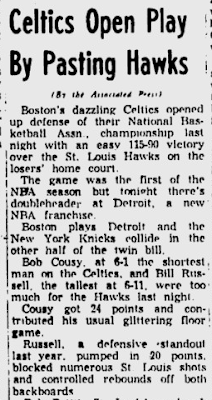 The most infamous “Tall Tale” regarding the two men occurred six months earlier and in the very same building. Red and his boys disputed the height of their goal in Kiel Auditorium prior to the start of Game 3 of the Finals. When the goal was confirmed to be the proper 10’, the feisty but slight-of-build Hawks’ owner mocked his former coach, calling him “Bush League!” Instinctively, Red wheeled around and took a swing at ol’ Ben, knocking him down and drawing blood. Commissioner Maurice Podoloff issued a hefty (for the time) $300 fine … and to rub salt into the wound, the Hawks would eke out a 100-98 victory to take a 2-1 lead in the series.
Less well-known about this incident – I was “in the dark” until just a couple of years ago – is that Red offered Ben a personal apology when the series returned to St. Louis for Game 6. Oddly, I learned this little tidbit in Greg Marecek’s Full Court, a history of the St. Louis Hawks, which also reveals that Auerbach would send his old boss a sincere congratulatory telegram following the 1958 Finals.

When welcoming his 1955 No. 1 Draft choice (fourth overall pick) to training camp, Coach Auerbach informed Jim Loscutoff that he had two jobs: Rebound, and make sure nothin’ happens to Cousy.

Loscutoff was a tough customer, the original Bad Boy, perhaps like a modern-day Charles Oakley Big, powerful, unrelenting, and unafraid. "I remember when he broke Kenny Sears' jaw when he was with the Knicks," says Carl Braun, a longtime opponent and teammate briefly with Boston. "That was totally irresponsible. He only had a few incidents like that, just a few fights. A few incidents doesn't make a Whole career bad but will get you a rep, if you know what I mean." Says another of Loscutoff's contemporaries: "If you undercut one of the Celtics, Jim would get you back. It may not be in that game, but eventually he would get you back. He would not forget. He held a grudge and would get you back hard."

Unfortunately for “Jungle Jim,” after averaging a double-double in 30 minutes per game enroute to Banner No. 1 (and getting off to a good start here on opening night), Loscy would participate in only four more before losing his season to a knee injury. 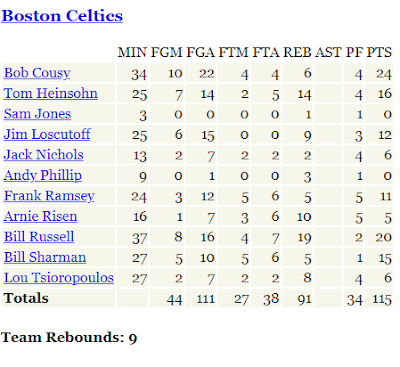 As for Alex Hannum’s [the only coach ever to beat the GOAT in a playoff series] Hawks … 77 missed FG’s is a rather inauspicious start for a run to a championship, huh? 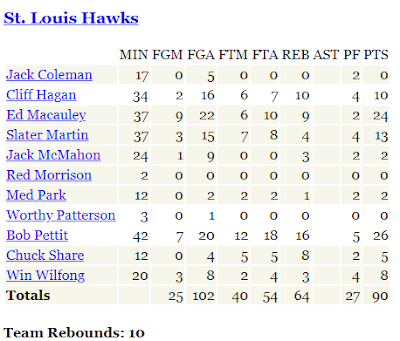