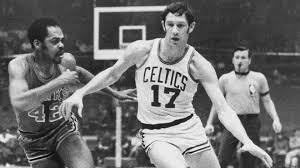 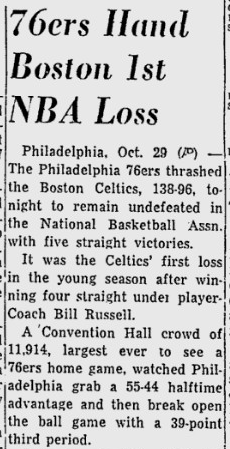 Just as would happen a couple of NBA generations later – again led by a uniquely gifted big man – this group of 76ers seemed destined to have their “One Shining Moment” during this 1966-67 season. They’d unseated Boston as Eastern Division regular-season champions in Auerbach’s final season on the bench – only to fall meekly to the GOAT etal in the playoffs, costing Coach of the Year Dolph Schayes his job … and perhaps jinxing that award ?? 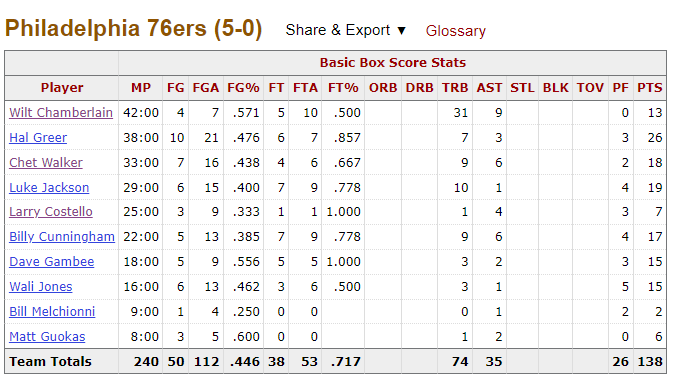 The defining moment for these champions-to-be is said to be when new Coach Alex Hannum cleared the locker room, prepared to “throw down” with Chamberlain … though Hannum’s most significant accomplishment with Wilt may well have been getting him to live in Philly rather than NYC during the season.

Despite the soundness of this night’s defeat, Coach GOAT would get the better of the HOFer Hannum in five of the teams’ subsequent eight encounters … the only team to outplay the Sixers in their unprecedented 68-win campaign. 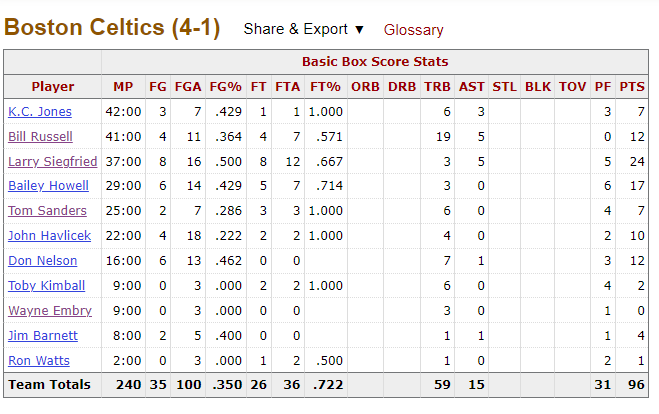 For the second game in a row, John Havlicek struggled with his shooting (a combined 8-for-28).
But the captain-to-be (the appointment would come in January) soon found his rhythm, kicking off an eight-season stretch of averaging 20+ points per game ...
… not to mention that the Celtics Ironman missed just 10 of the team’s 655 regular season games as it was transitioning from one “era” to another.
Accoutrements: nbcsports.com, Reading (PA) Eagle, basketball-reference.com