Jaylen Brown says he feels "lighter, faster, stronger than ever" 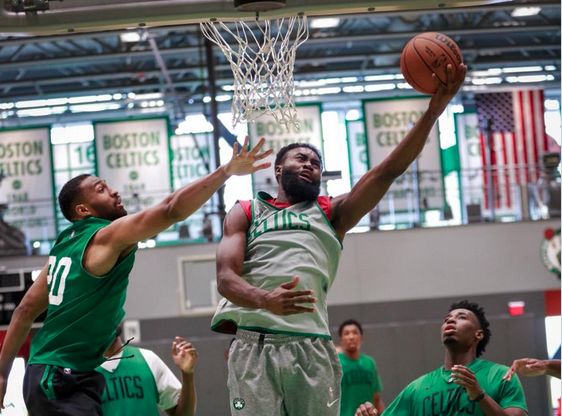 On the eve of the Celtics first preseason game of the 2021-22 season, Jaylen Brown says he's not only fully recovered from his late season wrist surgery, but feels "lighter, faster, stronger than ever." This is great news, since the wrist surgery was never a major deal, especially since it was on his off hand. More concerning was the games he missed and wasn't 100% because of his nagging knee issue.

“I never had surgery before, so this was a first for me,” a fully-healthy Brown said following Day 4 of Training Camp Saturday afternoon. “Definitely the mental part of it was interesting. The wrist takes so long to heal, it was kind of frustrating at times. But my body got a chance to heal, my mind got a chance to be refreshed, and right now I feel great. I feel lighter than ever, faster than ever, stronger than ever.”

“Going into the year, my body feels fantastic,” Brown reiterated. “I feel rejuvenated, I feel athletic, I feel fast, I feel dynamic, so I'm ready to go.”

So a side benefit of the Celtics shutting Jaylen down due to his wrist was the rest his whole body received, but especially his knee. Browns says while he was waiting for his wrist to heal he watched a lot of game film. Not only of himself, but other players. And Brown mentioned watching solid playmakers as his example, which is music to Celtics fans ears.

I've been adamant that I wouldn't trade Brown for Damian Lillard or Bradley Beal (And the trade rumors we hear are always even worse. They are Brown + Marcus and/or Time Lord + first round picks. Disgusting.). The one knock Brown gets when compared to a guy like Beal is that the Wizards guard is a better playmaker. Jaylen has actually improved as a playmaker each and every season.

Last season he had a 63% increase from the prior year in assists. Another jump like that would be huge.