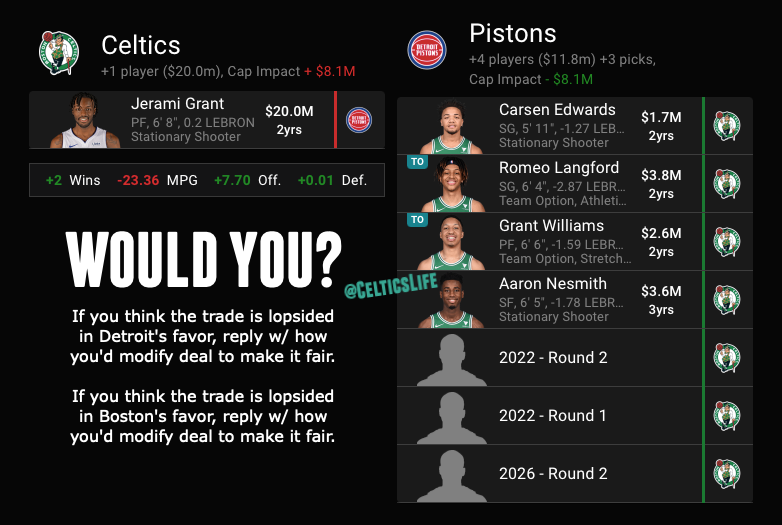 If I’m correct, Boston can’t combine Kris Dunn in a trade with other players until I believe the date of October 16th. “Would You’s” are definitely limited right now due to rules on trading newly acquired or signed players. But despite this above trade idea being accepted in the trade checker, my guess is it would have to wait until some other contracts are included.

Prior to now I was under the impression you couldn't use a TPE in a trade involving acquiring a player who makes more. Then again, prior to Boston using the rest of the Gordon Hayward TPE to acquire Josh Richardson's contract, all the "experts" told us that trade wouldn't work. Turns out the Celtics capologists know more than the Twitter "experts." Who would have thunk it? 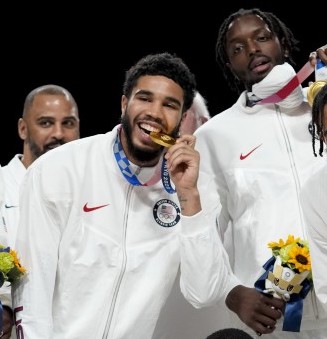 The contracts are semantics in this deal. The assets trading places are the Celtics getting Jerami Grant and the Pistons getting a 2022 first round pick and Aaron Nesmith. Despite his less than extraordinary rookie campaign, he's likely still considered asset wise on par with a 1st rounder.

Romeo Langford and Grant Williams? Not so much. They are mainly contracts in this deal, but they are young enough and have potential, so combined, along with the two 2nd rounders that might equal another first rounder.

Add the contracts of Dunn and Jabari Parker in on October 16th to make the money work (Pistons can waive Jabari since his contract is non guaranteed) and my guess is Brad Stevens would do this deal in a heartbeat. Consolidate end of the rotation/bench players for a stretch 4 All-Star. Then fill out the 13-15 spots on your roster with some vets on league minimum deals. Isaiah Thomas, Avery Bradley types and it's compete for a title time.

But Nesmith and a projected 1st for Detroit is a hard sell for their fans. Neither Nesmith or Langford were amazing in Summer League. Amazing enough to be considered major gets for Detroit. But keep an eye on a Jerami Grant deal later in the season.

If you think the trade is lopsided in Detroit's favor, comment with how you'd modify the deal to make it fair.

If you think the trade is lopsided in Boston's favor, comment with how you'd modify the deal to make it fair.