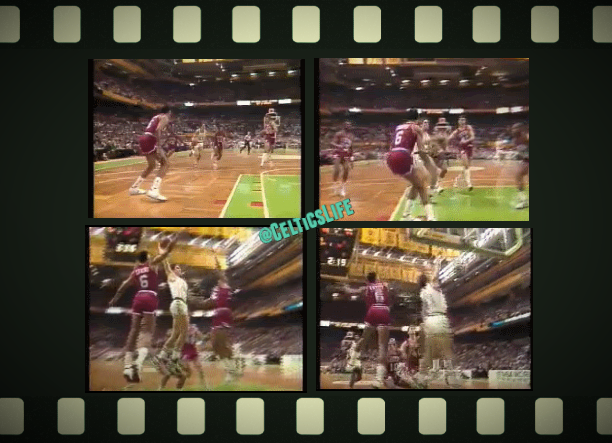 Remember this scene from the classic baseball movie Field of Dreams?

Conner Henry only played in 93 games over his two year NBA career. The shooting guard out of UC Santa Barbara played for four teams, but Henry had his "Field of Dreams" moment on the Boston Celtics when he did this:

Most of us can only dream of playing one minute in a NBA game. Henry not only got to play with Hall of Famers like Larry Bird, Kevin McHale, Robert Parish, and Dennis Johnson, but he will always have the highlight of dunking over 76ers Hall of Famers Charles Barkley and Julius Erving. Would love if someone on Inside the NBA played this video and asked Chuck for his thoughts.

Speaking of video, could only find this gif from tb727's What the Hell Happened to...Conner Henry?, but if anyone has a video of the moment, I'd love to add it to this post. What a moment for Conner Henry, Celtics fans, and anyone dreaming of having their "one shining moment" (Shout out to Luther Vandross) in the NBA!