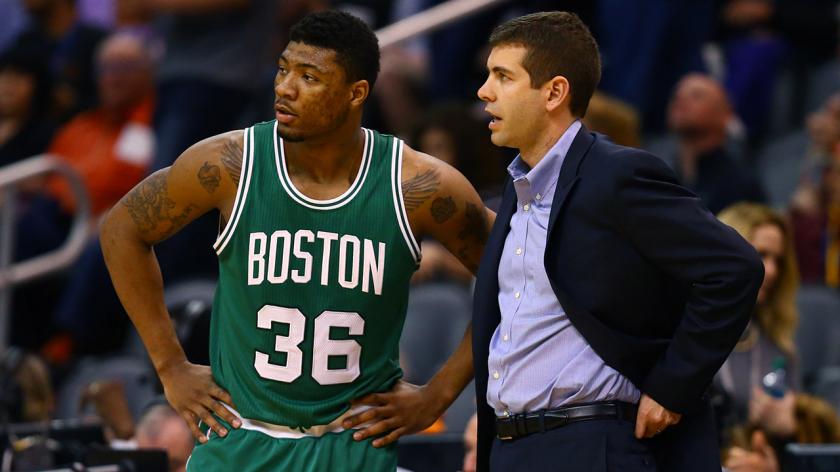 Hear that the three-team trade (Bos.-ATL-Sac) will be announced soon, unchanged. ... Celtics await a response from Smart agent Jason Glushon, but are said to be willing to extend him for roughly $17M over four years.

This offer can put to rest the rumor that Stevens and the Celtics want to get rid of Marcus Smart. In the end, it almost always comes down to the contract terms. After hearing for two years what a tremendous locker room guy Kemba Walker was, I don't buy the rumor that they wanted him gone. The Celtics wanted the $37 million a year gone. If Kemba was making what he's scheduled to make with the Knicks ($8 million), Boston would be glad to have him. The Marcus Smart trade talks are mostly about his contract as well.

A four year, $68 million offer to Smart is a strong offer on their part. Fournier received a 3 year deal from the Knicks (New York has a team option on a 4th year) and he was a free agent. Smart could wait til he's a free agent and it only takes one team to offer him dumb money for him to leave. But he also could end up having to settle for a 3 year deal like Fournier. So there are risks involved.

Form previous reports it appears Smart was looking for more of a 4 year, $80 million deal. Could the Celtics and Smart meet halfway? They could, but then you start getting into a situation where if you're Boston you now have a hard to move contract. And that' the thing, Boston is only willing to extend Smart if it's a deal that could be moved if necessary.

The Celtics can't sign Smart to this extension and also sign Bradley Beal to a max deal. If the Celtics sign Smart, but still wanted Beal, then Smart would have to be traded. I suppose there's a route where they trade Robert Williams AND Al Horford for absolutely no contracts coming back that go beyond this season and Beal takes a bit less to sign, but then Boston would have a team of Smart, Beal, Jaylen, Tatum, and basically nothing else.

Personally I don't think the odds are great that Beal remains on the Wizards through the season. I think he either signs a new deal with the Wizards or with whatever team may trade for him this season. Putting all your eggs in gutting the team and not signing anyone past this coming season, just for the hope that Beal ends up a free agent and picks Boston seems foolish.

It appears that Fournier could have been signed to a deal that would have been movable next summer. Maybe Stevens and the Celtics are coming around to the fact their plan is rather risky and thus the Schroder and Smart rumors today.

But the good news for Smart fans is that the Celtics have made an effort to retain the longest tenured current Celtic. And I should point out that Boston could still be a player in next year's free agent class, while retaining Smart. Just means they can't sign a max guy, but they could still add a player who makes closer to $20 million if they clear enough contracts and want to.

If you're a Celtics fan would you prefer Smart and a free agent who makes around $20 million a year or would you prefer Beal? Most people would prefer the latter (not counting the Smart stans of course), but the ball isn't 100% in the Celtics court to choose here. If you go for option B you could be left with no Beal and Smart walks. Sure you'd have a lot of cap space, but who are you going to use it on?

The back-up plans to Beal in terms of max contract players that are scheduled to be free agents next summer will one by one sign new deals this season with their current teams. Kevin Durant just did. I wouldn't be surprised if Zach Lavine is next.

Most players do, especially since in the modern NBA, players have learned the art of signing for the absolute max they can get, which means a 5 year deal with their current deal, and then if things go south, they force their way out. A cake and eating it too situation if there ever was one.

Stevens is new to the job and is kind of learning as he goes. Would he have gave away pick #16 and taken on Al Horford's bad contract if he knew he could have bought Kemba out instead? Who knows. But maybe he's seeing now that this whole wait til next year thing has more complications than its worth.

As long as Smart and Schroder get deals that aren't inflated, if the time came where Beal was actually a free agent and wanted to sign with Boston, Stevens will be able to find a taker for each player and be able to make it happen (Still would need to find a taker for Horford as well). Here's hoping Smart accepts the 4 year $68 million offer. It's good security for him, and Smart is a solid player who helps your team, so it’s a prudent investment for Boston.