The original Dream Team famously lost a practice scrimmage to a bunch of college players, but this year's Team U.S.A. took things a step further losing to a Nigeria team that didn't even have its best eligible players.

The original Dream Team famously lost a practice scrimmage to a bunch of college players, but this year's Team U.S.A. took things a step further losing to a Nigeria team that didn't even have its best eligible players.

There are currently 19 players of Nigerian origin on NBA rosters, which include top players like Giannis Antetokounmpo, Victor Oladipo, Deandre Ayton, and Bam Adebayo. None of those four were playing for Nigeria last night. In fact Adebayo was playing for the losing U.S.A. squad. 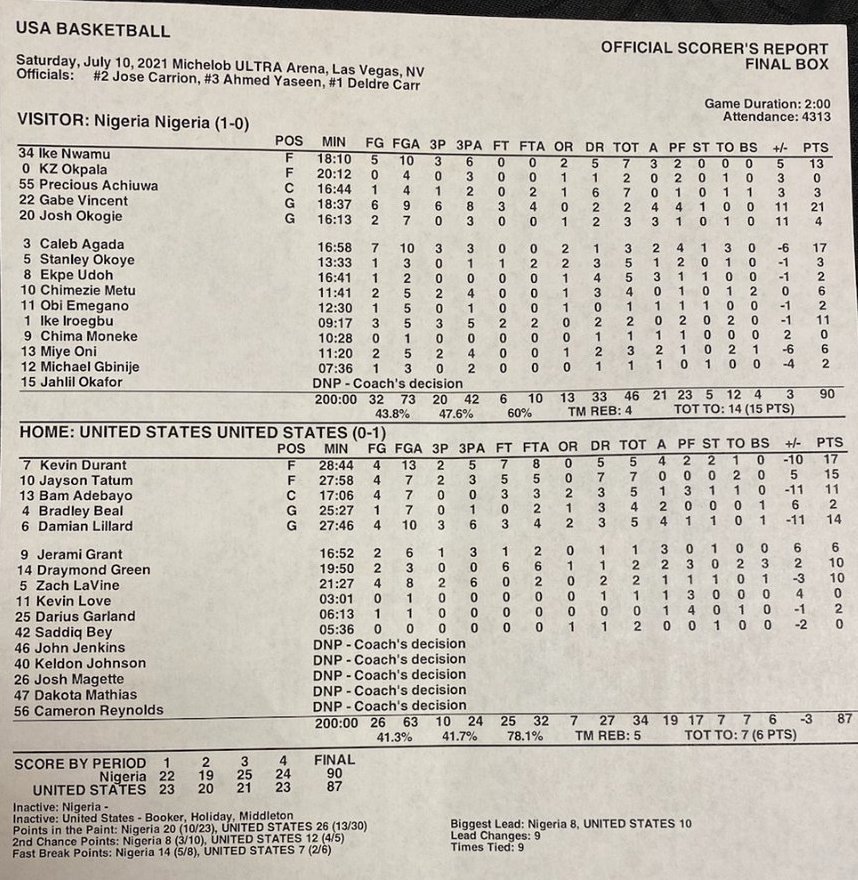 The four scorers for Nigeria were Gabe Vincent, Caleb Agada, Ike Nwamu, and Ike Iroegbu. So not exactly Grant Hill or Chris Webber. This should serve as a wake up call for Team USA that they aren't going to bring home the gold by just showing up with the best roster.

I think the real story here is what an awesome upset this was for Nigeria. Like the U.S.A. is still going to be favorite to win the gold, but this game will forever be a source of pride for the players who played last night (Sorry Jahil Okafor) and the people of Nigeria.

Sure it would have been more special for them if it had actually taken place in the Olympics, but it's still a huge David defeating Goliath upset. What was also very cool is the upset couldn't have been more of a team effort. Out of the 14 players who played for Nigeria, 12 of them played more than 10 minutes, and the other two played 8 and 9. KZ Okpala was the lone Nigerian player to hit 20 minutes (20:12).

As for team U.S.A, our man Jayson Tatum had a nice night personally with 15 points and 7 rebounds in 28 minutes (Tatum highlights below). It should be noted that the apple of Boston media's eye Bradley Beal couldn't buy a bucket and finished with just 2 points in 25 minutes.

While the Celtics acquiring Beal would be a win in the press, be careful what you wish for Celtics fans. Obviously last night's performance was an outlier for Beal, but I will continue to firmly believe that trading the younger Jaylen Brown for Beal would be a mistake. Brown has improved every season and was Mr. Consistency for a very inconsistent Celtics squad last season. Beal has the better resume solely because he's older and has had more years in the league. If you want to complain about the combo of Tatum and Jaylen never making it past the conference finals (which is a rather preposterous complaint), where has Beal led his team?

I can remember one 2nd round series (where he lost to Jaylen and the Celtics by the way). Russell Westbrook is a former MVP who has made an NBA Finals as top 2 player on a team. If Beal is so good, why did the Wizards finish with a worse record than Boston last season?

Anyway, Team U.S.A. is stacked and will only get more stacked when the NBA Finals ends. They are going to win most of their games and Tatum and Beal are going to both shine, as they should against mostly inferior talent. You're going to hear more and more about how the Celtics should trade Jaylen for Beal, so the St. Louis connection can "do this for in the NBA." But in the NBA, they won't have ten All-Star teammates and they will be playing tougher competition.

I'm going to enjoy Tatum playing with all these stars, but at the end of the day, the only Beal trade that makes sense for me is one that doesn't exclude Jaylen Brown.