Is the NBA ready for … the Harlem Globetrotters? 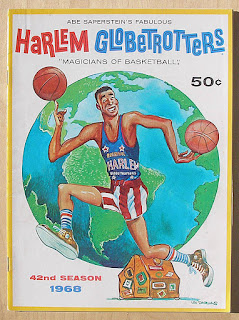 The squad first assembled in the summer, a group of talented high-school pals from Chicago who thought they were good enough to go out and take on all comers … by the New Year they’d hooked up with a 24-year-old promoter/hustler to book their games and serve as their bench coach.
Thus were born the World Famous Harlem Globetrotters, taking the court as such for the very first time on January 7, 1927, in a place called Hinckley, Illinois. It’s said the players were paid $75 apiece for that game and would go on to play in excess of 1,000 games all across the Midwest over the next decade, winning consistently (close to 90%) and entertainingly. In 1939, the team would finish second (to the New York Renaissance Five) in an invitational tournament to crown a national champion.
And on February 19 of 1948 in an exhibition game at Chicago Stadium in front of 17,853 fans, the Globetrotters eked out a 61-59 victory over Chicago native George Mikan and the brand-spankin’-new Minneapolis Lakers of the National Basketball League … the financial success of the event induced no less than six rematches over the next four years. 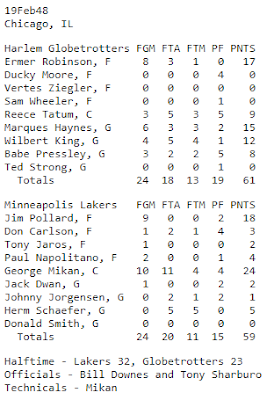 But as Mikan transitioned from “labor” to “management” in the mid-50’s, the Lakers’ fortunes fell, both on and off the court. In a relatively fruitless money-grab, the Lakers played the Trotters one final time in 1958 and still drew a crowd in excess of 10,000 … but the die had been cast for the Twin Cities. New majority owner Bob Short was already eying the un-tapped Left Coast, to which he would move his franchise in 1960. 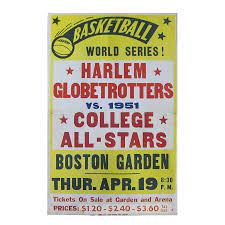 Unfortunately, Mr. Short’s itinerary would throw a proverbial monkey-wrench into the plans of the visionary little man who, ever since that early January evening back in 1927, had overseen the running of the by-then-truly-World Famous Harlem Globetrotters.
Tailor’s son Abe Saperstein – who had himself hand-sewn the uniforms the players donned for that very first game – and his crew were the most successful (on the court as well as off) basketball team anywhere by 1946 when the BAA was launched, ol’ Abe already well-acquainted with the consortium of arena operators involved in the project … and a timely appearance by the ‘Trotters likely enabled an owner or two to “make payroll” in the Association’s formative years.
The rapport between Saperstein and the league became “cozy” enough that the Globies’ New York office was a suite in the Empire State Building sub-let from the NBA.
But the relationship flipped from “cozy” to “frosty” when Short was awarded the LA market, with Saperstein counter-punching by launching the short-lived American Basketball League in 1961. 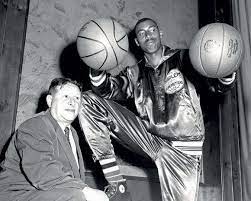 On Christmas night of 1959, Abe’s guys performed at Madison Square Garden prior to the Knicks-Celtics contest, then three nights later before the C’s home encounter with Minneapolis … but the research of Rhode Island historian Michael Hamel suggests that the next Harlem Globetrotter appearance on the Boston Garden parquet was not until December 7 of 1966.
Abe Saperstein went to his grave on March 15, 1966 believing that NBA Commissioner Maurice Podoloff and the NBA owners had reneged on a gentleman’s agreement that Saperstein would have the “right of first refusal” when the league expanded to California.
Then a week or so ago, this: 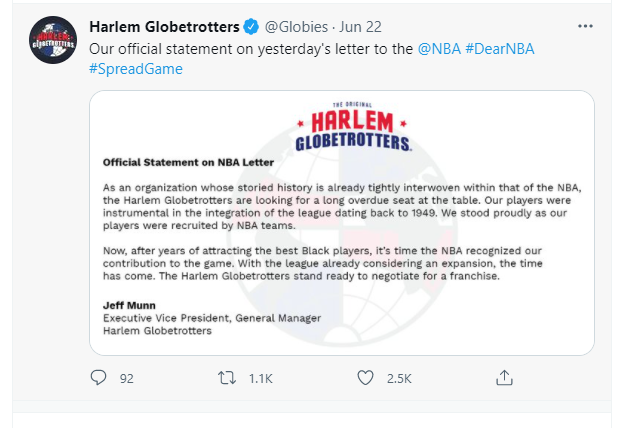 Is the time right for the NBA to settle an old debt?
Abacus Revelation for the Road
There's always two sides to every story.
Here's another "take" on Honest Abe!