Can the Celtics trade for CJ McCollum?


You can now add Portland guard CJ McCollum to the long list of players who have been linked to the Boston Celtics this offseason. Rumor has it that Boston could have interest in swinging a deal with Portland involving the 6'3 guard who has served as Portland's #2 option for the past few seasons. 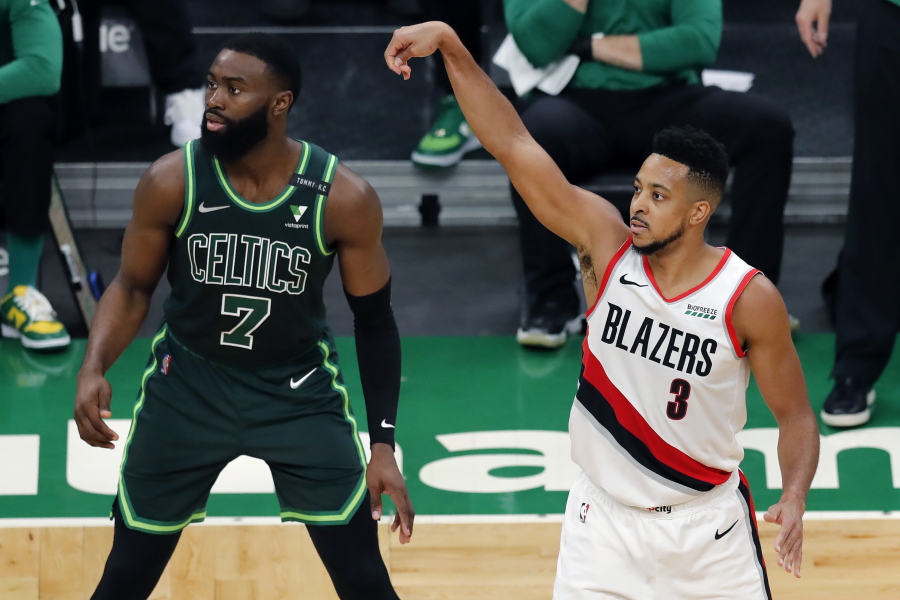 In a late June interview with Boston radio show "Felger and Mazz", Celtics majority owner and Governor Wyc Grousbeck said this "There is a lot of stuff that could happen in the summer. I don't really know what the roster is going to look like in August. It's going to be a very busy July". He would go on to tsay that the Celtics, while not hard-capped, have to be "clever" with their moves. This is what makes the Celtics' interest in McCollum, well, interesting. McCollum signed a 3yr/$100M contract extension back in July of 2019, and that deal kicks in next season, where he'll be making nearly $31M. This is what makes no sense for the Celtics. Kemba Walker was traded to dump salary, so it really doesn't make much sense to bring back a player making even more.

With that said, how could the Celtics pull off a trade for CJ McCollum?

The name that jumps out most to me is Al Horford and his $27M contract for next season. However, due to the fact that he was recently acquired, he could not be moved to another team yet. Also, Brad & Ime have spoken highly about what Al brings back to Boston, and I can't help but think that he won't be moved again before he plays for the Celtics.

Marcus Smart is another name that comes to mind in trade rumors alot, and this is no exception here. Smart only makes $13.8M next year, so he'd have to be packaged with another player(s) to match McCollum's $30.8M salary and make this deal work. Let's just say Evan Fournier agrees to a deal somewhere in the neighborhood of $15M-$17M, which seems pretty likely as of now. The Celtics could make a sign-and-trade deal with Evan Fournier and Marcus Smart to acquire CJ McCollum. But, it is worth noting that Ime Udoka and Brad Stevens also think very highly of Marcus Smart. Stevens asked for Smart's opinion on the hiring of Udoka, and Udoka called him a "foundational piece" to this team. I doubt that he gets moved. Also, Evan Fournier plays a very similar game as McCollum, and it's probably better to just keep him and his production rather than shipping both him and Smart off the Portland.

I think it's safe to say that McCollum's availability will change depending on what happens with Damian Lillard, if he decides to stay or ask for a trade. Lillard's decision will likely have the biggest impact on McCollum's future in Portland; Lillard has supposedly asked for another All-Star caliber player to be acquired in order for him today. Is McCollum that guy? Probably not. If Lillard wants out, does Portland blow it up and become sellers? Perhaps.

So, to answer the big question: Yes, the Boston Celtics can trade for CJ McCollum. Will they? No one knows. All that we know so far is that the Celtics have had interest in trading for him. That's it. That happens all the time around the NBA; teams have interest to trade for/sign players all the time, and most of the time, a team's interest never amounts to anything. Boston certainly has the assets to make Portland interested, with a combination of Horford, Smart/Fournier, and 1st round picks. But will Brad Stevens pursue a deal with the Blazers? We know that he's not done making moves, the roster as it stands now is certainly lacking in some areas. Is CJ McCollum the answer?