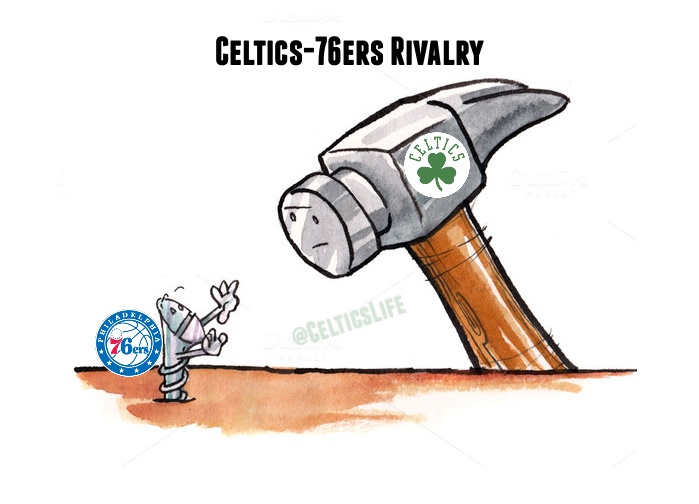 Quote goes, "Sometimes you're the hammer. Sometimes you're the nail." But in the case of Philadelphia's basketball rivalry with Boston, the Celtics have been almost exclusively the hammer in this relationship. Whether it was Bill Russell's Celtics constantly beating Wilt Chamberlain's Philadelphia Warriors/76ers or it was Larry Bird's Celtics beating the 80's 76ers, Boston has simply dominated the rivalry.

Wilt and Philly won one measly title while Bill Russell's Celtics were winning more rings than fingers to put them on. I'm actually happy that a legend like Dr. J got a ring in 1983. Beat LA right? Better Dr. J than the Lakers. While I won't dismiss the fact that Philly provided some memorable moments back in the day vs Boston, and had some good teams, there is zero need for Boston fans to pay Philly fans any mind. We've won 17 championships. They've won several "2nd prize in a beauty contest" Monopoly cards.

Of course we're going to own real estate in 76ers fans' heads. But you have any fans that get triggered by what 76ers fans, just remind them we're the hammer and they're the nail. Road Runner doesn't waste any time thinking about Wile E. Coyote.

Will add some more to this post later tonight, but have to run.