How Brad Stevens’ roster building could differ from Danny Ainge 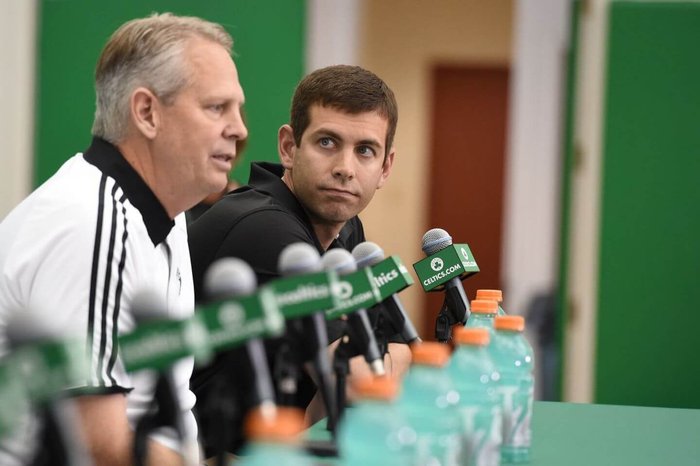 Well the off-season certainly started off with a bang for Celtics fans. Let’s get right into it, there is one thing In particular that I could see changing under the Brad Stevens run as Celtics President of Basketball Operations. That is, that Brad loves his veteran players and Danny loves his young players with upside. Brad tends to lean on his vets, for good reason, farm more than his young guys where as Danny keeps wanting to stock pile picks and using them to select young draftees instead of trading them for proven veterans.
For example during this season, many people, including Danny most likely, were wondering why Brad would continue to lean on Jeff Teague and Semi Ojeleye instead of raising the minutes of Payton Pritchard and giving Aaron Nesmith minutes to chow what he can do. I believe the reason is that Brad knows what he can expect from his vets, and conversely has concerns about his young guys’ ability executing his game plans. If you think back, the only rookie player to ever get significant and instant starter minutes on a Brad Stevens team was Jayson Tatum. Before you say, ‘well yeah he was the 3rd overall pick, of course he’ll get the most minutes’, Jaylen Brown was also the 3rd pick, Marcus Smart was the 6th overall pick, Romeo and Nesmith were 14th, and Olynyk was as a 13th pick. He has had plenty of “high upside” picks whom he has decided were not good enough early in their careers to crack the rotation.
All of this being said, I very much could see a potential shift in the roster building philosophy in Boston moving forward to a degree. A guy like Grant Williams could find himself on the trade block along with the remaining $11mil of the Hayward TPE to get a proven veteran from a non playoff team like Sacramento, Detroit, or Minnesota. Guys like Carsen Edwards and Luke Kornet could needing to find new teams if Brad indeed were to try and bring in another veteran contract or two.
In terms of who Brad should be targeting in the veteran market, I will leave names out for another blog entry, but a pass first point guard and a solid third big should top the shopping list.