Afternoon Delight: The true story behind the time Rondo Burgundy announced a game with Mike Gorman 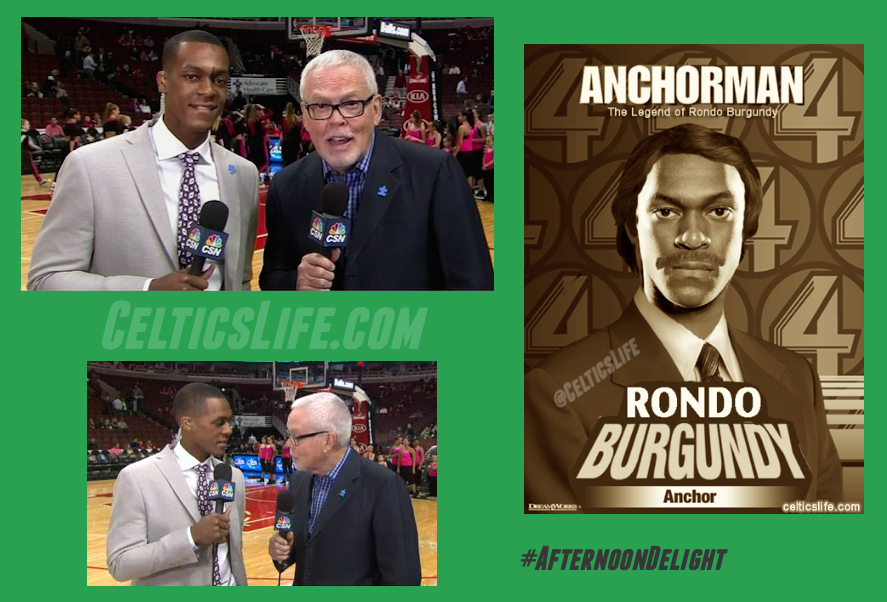 With the news that Brian Scalabrine has signed a 5 year extension as the Celtics' color commentator, we figured today might be as good as any to fill our loyal readers in on a secret we've been keeping for the past seven years. Celtics Life's own Rondo Burgundy previously announced a game in 2014. Here's the backstory:

After tearing his ACL in the 2012-13 season, Celtics point guard Rajon Rondo wasn't playing both ends of back-to-backs during the 2013-14 campaign (Sounds kind of similar to the plan that the Celtics put in place for Kemba this season huh? But fans still called Walker soft when he'd sit per the C's orders). When he was asked to announce a game that he'd be missing with Mike Gorman, Rajon ever the prankster, concocted a plan to enlist a little known media member that not only had a similar name, but people constantly told him bore a strong resemblance.

Of course those familiar with Celtics Life's Afternoon Delight crack news team need no introduction to the man he chose, Rondo Burgundy. After much back and forth, Rondo Burgundy VERY RELUCTANTLY agreed to shave his glorious mustache and cut off his amazing hair after some concessions made by Rajon (See below).

The next plan of action was for Rondo Burgundy to change his style of speaking to more closely resemble Rajon's part unique voice and cadence. The two went over to Kevin Garnett's house. KG was hosting a private party and the band was led by Garnett's absolute favorite Kenny G.

Now Kenny G plays the soprano sax, while Rondo Burgundy is more of a yazz flute fan, but they are close enough that Burgundy appreciated the gesture. The sound of smooth jazz, coupled with a fine bottle of scotch prepped Burgundy to focus on the role of pretending to be Rajon.

It actually didn't take long for Rondo Burgundy to start sounding exactly like Rajon. You see, Burgundy, Rajon, KG, and Kenny G simply watched the 1970's movie The Mack. Burgundy was told to just pay attention to the lead character Goldie, played by Max Julien, and that was a wrap.

Not one viewer ever suspected it was anyone but Rajon Rondo announcing that game with Gorman. During one commercial break, Burgundy did accidentally start babbling something about "pimps and hoes" off the air, but after a perplexed Gorman asked, "Excuse me Rajon?" Burgundy quickly segued the topic to Connect 4, and Mike moved on.

And there you have it. The true story of one of Celtics Life's own getting to call a Celtics game with the legendary Mike Gorman!

Kevin Garnett finally meets the man who got him "through so many tough times," Kenny G https://t.co/xpwlUesZod pic.twitter.com/YL67Qi5vuD