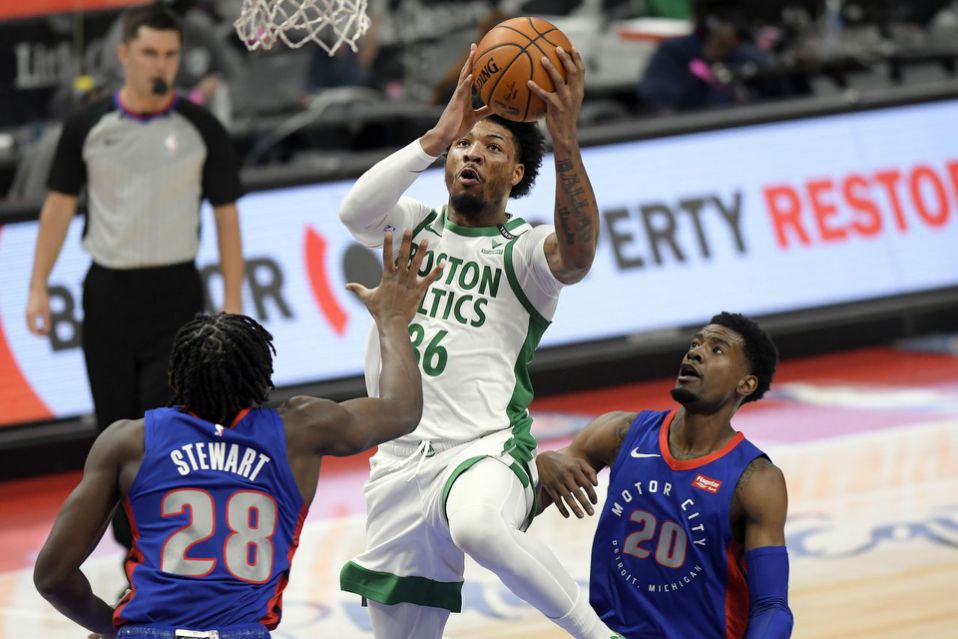 Tuesday night and yesterday Kendrick Perkins strongly said he's never experienced racism in Boston and never seen any incidents at the TD Garden. Then this morning during his weekly appearance on Toucher and Rich, Danny Ainge said this about Kyrie Irving racial accusations: "I never heard any of that from any player in my 26 years in Boston. I never heard that from Kyrie, and I talked to him quite a bit."

But this afternoon Marcus Smart, who previously shared an experience he had of being called a racial slur outside of the Garden, seemed to collaborate Irving's Tuesday night comments:

I was unable to decipher what word the reporter uses after "racially," but Smart answered that he's "heard a couple of them" towards the opposition. I'm guessing Smart means he literally heard the racism towards the opposing players and not that he heard of the incidents, but that was left slightly unclear.

There was an incident a few years back with DeMarcus Cousins which led to a reporter asking Kyrie Irving, who had been both an opponent at the Garden and was at that time a player, whether he had ever experienced racism in Boston. Kyrie at that time said he had never witnessed it personally. This Cousins incident could be one of the occasions Smart is referring to.

One could say that it's impossible to police several thousands of people and amongst them are always going to be some bad apples, so you shouldn't judge a whole crowd or fanbase by the actions of a select few idiots. You could also say that I'm sure there have been racial incidents at most of the NBA arenas. But that would be deflecting. This is not a good look for Boston.

And while a good follow-up question would have been whether he's heard these incidents only at the TD Garden or at other arenas, we still need to deal with the Boston ramifications. And in addition to the media, if Danny Ainge is saying in his 26 years with the Celtics he's never heard any racism and then later that day one of his players says he has in his 7 years, well then as the president of the team Ainge should be arranging a meeting with Marcus as we speak.

If you thought that Perk and Danny threw a good deal of water on the fire Irving lit on Tuesday, Smart's comments just added some gasoline. We'll have to wait and see what happens next. If you believe everyone who has spoken on the issue this week (Kyrie, Perkins, Ainge, and Smart) one takeaway would be racial incidents have occurred, but they are not prevalent by any means.

There's no way Perkins and Ainge could have been in Boston that long while never witnessing any racism if it was a common occurrence. And even Smart used the word "couple." Now by definition that means two, but even let's say there was one every season he's played for Boston, which would be 7, that's 7 too many, but still only one incident per year. Again, seven is too many and one is too many, but it’s important to have the facts so when the national media discusses this it doesn't morph into a narrative where opposing players are getting heckled with racial slurs in Boston every night. And again it would be helpful if the Celtics or NBA investigated Smart's claim to get the full picture on this. And one question to ask Smart would be whether this was unique to Boston or a league wide issue.

Jazz beat writer @andyblarsen reports that the fans were ejected for heckling the family of Grizzlies star Ja Morant.

We should also add that Marcus has consistently said great things about Boston fans, so no one should twist this as he's somehow against his team's fan base. Smart saying everyone should be treated with respect is something no one should argue with. And that goes beyond racism. Fans cross the line in other ways as well. Just last night a Philly fan (or fans) threw popcorn on Russell Westbrook. Players shouldn't have to deal with profanity towards them or insults about their family. The best thing that the majority of fans who aren't assholes can do is to report over the line behavior by your fellow fans. Because when the idiot two rows behind you causes an incident, it makes everyone in the crowd look bad.

The fan that is yelling profanity at a player is more likely to things to another level with racism than another fan that is acting respectful. So text whatever help line the Celtics give you and get rid of these fans before they get to the point of throwing something at a player or saying something racial.