Boston Sports Journal's John Karalis penned an article late last night titled, "Black athletes are trying to have a conversation with us. We have to listen" On its surface it was a White writer trying to educate White people to be less racist. You've seen a lot of this in the past year. Many call it virtue signaling. Now personally I'm skeptical of any company or person that all of a sudden seemed to care about racism in America after the killing of George Floyd. Like where were these emails and tweets supporting oppressed people a week, month or a year prior?

While Karalis received praise for writing on the topic, it didn't take long for his virtue signaling to expose his own prior racism. No idea who Brad Rifkin is, but he was quick to reply to Forbes' Chris Grenham's tweet complimenting Karalis showing the writer's hypocricy.

As of this time, Karalis has not attempted to deny or comment at all on the exposure of his past racist,anti-gay, and other discriminatory tweets. In his Boston Sports Journal piece he writes:

If your reaction is “I’m not racist, so I’m sitting this one out,” that's not good enough. At first, I was going to do the same, but today’s comments from players on both sides made it clear that can’t be an option. The conversation needs to be had.

So there is definitely a disconnect in his initial claim that he's not racist and what he has allegedly tweeted in the past. Now if he believes that the only racism that matters is that directed toward Black people who happen to make up the majority of the sport he covers that seems rather disingenuous. So it's ok to be racist against Asians because there aren't many NBA players who belong to that race? Or it's ok to make repeated anti-Gay jokes because there aren't any openly gay NBA players? And you wonder why there aren't any?

If Karalis had included in his post his history of racist and homophobic tweets, codemmed them, and explained how he's grown then I'd have no issue with him attempting to lecture his white readers on being racist. But none of that was included. 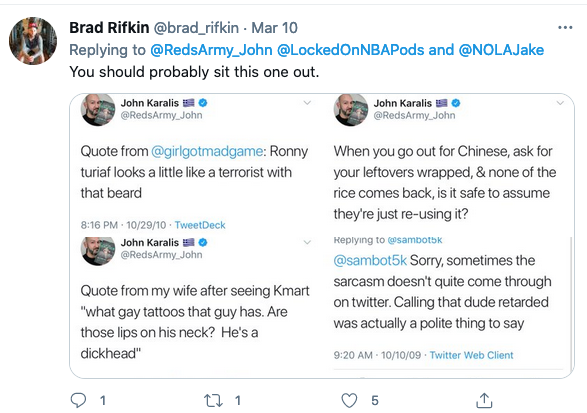 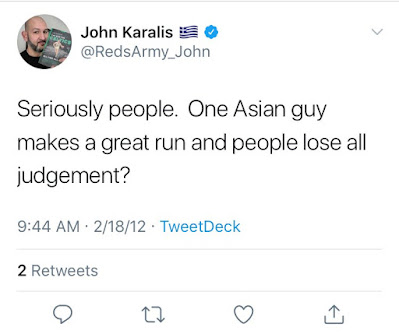 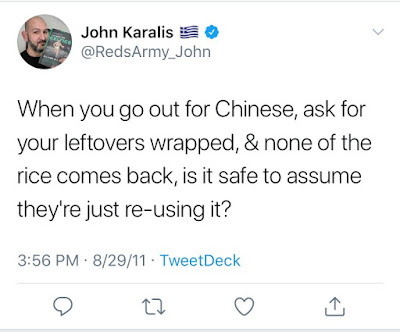 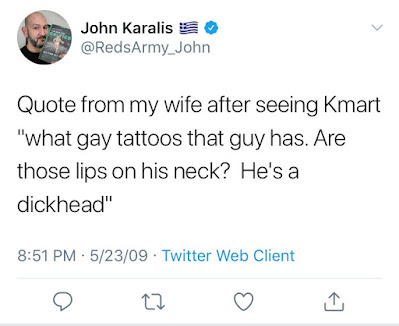 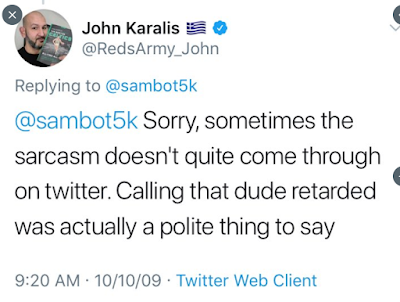 And some more "jokes" from Karalis via this post: 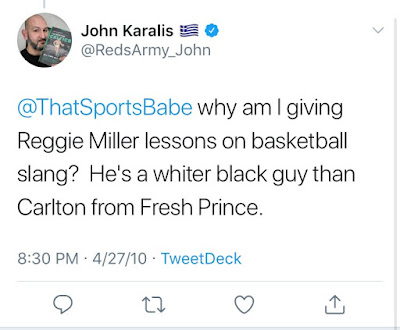 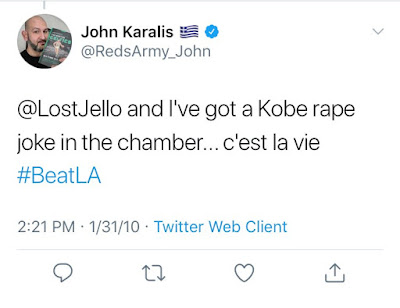 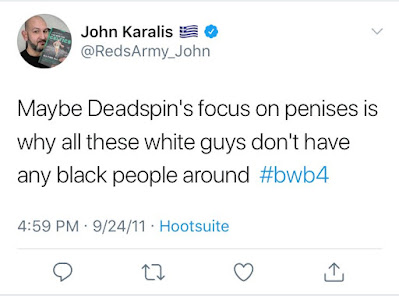 What do you have against disabled people, John? pic.twitter.com/hZdjAvgX4b

Karalis post screams pandering knowing what we now know. And pandering or anything fake doesn't help one bit in terms of tackling real issues.

I should add that full disclosure I've met Karalis a handful of times back when Celtics Life was in it's infancy. At that time he and someone named Chuck ran a blog named Red's Army. He seemed nice enough the first time I met him, but as Celtics Life rather quickly overtook Red's Army in popularity his initial cordialness turned to bitter jealousy. His Red's Army writers would consistently attempt to troll on celticslife.com with comments on the site and our Shout Box. He'd try to troll on Twitter as well in an attempt to get clout from our much more followed account at the time. I instructed all our writers to just ignore him, to not feed the troll.

Of course this was him having no idea what he was talking about. Nike can definitely donate $10k. A small business has to pay for the blank shirts, the printing, shipping, the packing supplies, the employees who are fulfilling orders, the postage, the PayPal fees, etc. We actually lost money at that time, because I didn't account for the fact that I would need to hire extra people to help fulfill all the orders. And all my personal time fulfilling Boston Strong orders was time taken away from the site.

So Karalis has been ignored for the past eight years entirely. But it's probably a good thing that I have past history with him, because I'm pretty sure writers who are buddy buddy with him aren't exposing this alleged racist hypocricy right now. And if people are expecting the predominantly white male Celtics writers to educate them on racism in Boston it is definitely imperative that we at least know if these same writers have a history of racism.

Hopefully Karalis adds an addendum to his article with a sincere, self assessment of his prior discriminatory statements. In addition, hopefully his fellow White male Celtics writers cover this story and don't just ignore it because they are friends with Karalis. And we hope Boston Sports Journal denounces Karalis' past racist and discriminatory words. Otherwise any future posts on the topic of race by these same friends of Karalis will be hollow.

We will update this post with any further news, but my initial guess is that Karalis and his friends will do what they need to do to make sure this story doesn't gain traction. Kind of an example of the systemic racism Karalis was lecturing people on.