Kyrie Irving says he hopes return to Boston won't include "belligerence, "racism" or "yelling" from crowd 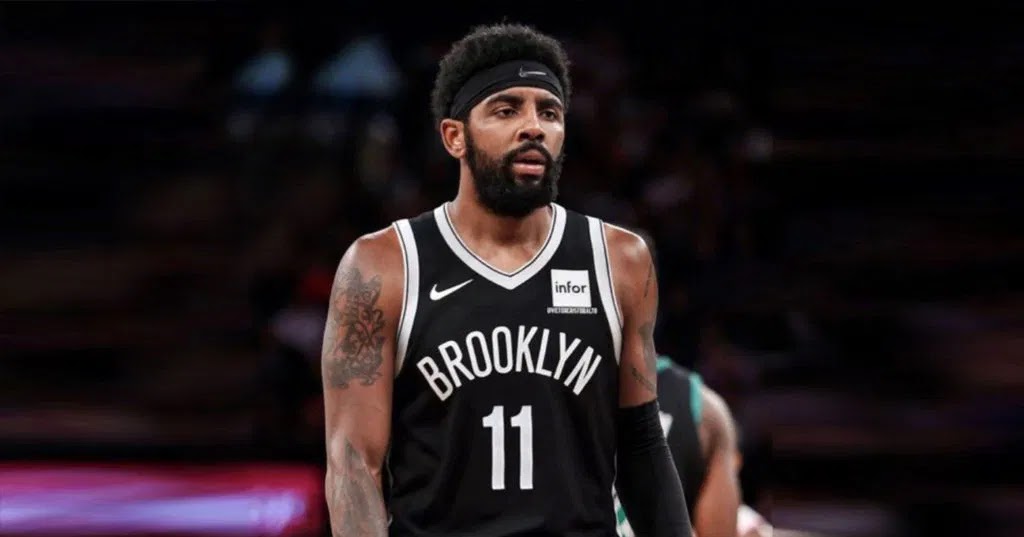 It was only a matter of time before Kyrie Irving said something to the media this series that would take the focus off of the play on the court. That came tonight when as Gary Washburn, writes, "Kyrie Irving fans the flames with bombshell before return to Boston."

‘Hopefully, we can just keep it strictly basketball. ... There’s no belligerence or racism going on, subtle racism, and people yelling [expletive] from the crowd. Even if it is, it’s part of the nature of the game and we’re just going to focus on what we can control.’

Irving was then asked whether he’s experienced racism in Boston during his career. With Kevin Durant offering his commentary while Irving was on the Zoom camera, Irving said: “I’m not the only one who could attest to this . . . but it’s just, it is what it is. The whole world knows it.”

A Nets official quickly called for the next question.

While there were no follow-up questions on the topic, it would have helped if Irving was asked to provide an example of "subtle racism" he might expect. Because Black and White players alike, will tell you Boston crowds are not kind to former players who fans feel betrayed them. See Roger Clemens, Johnny Damon, and Ray Allen as a few examples. So Irving is going to have mean things yelled at him just like all three of these aforementioned former Boston athletes. And Irving already knew this about Boston when he had the city on his preferred list of trade destinations when he demanded out of Cleveland. He had just been the bad guy on a Cavs team facing the Celtics in the Eastern Conference Finals before his trade to Boston.

And Irving infamously a year into his Celtics tenure said he wanted to remain in Boston the rest of his career. Also of note, Irving never mentioned "racism" as a reason why he wanted to "go back home" to play in Brooklyn. And Irving isn't one to not say what's on his mind. So another follow-up question could have whether something has happened to him in Boston recently to change his view. It should be noted that the only two times he's played in Boston since he signed with Brooklyn were both games played in front of zero fans.

Without anyone asking a follow-up question there is just a lot of gray area in what Kyrie might call "subtle racism." Because he's going to hear things like, "You suck traitor!" Does Kyrie find a phrase like that "subtle racism" if it's said by a white fan? Too often in 2021 you'll see people label something as "racist" simply if it's a White person wronging a Black person. It could be racism, but it could also just be someone being an asshole, who would have done the same thing to another white person.

📹 Kyrie Irving said he hopes he's not subject to racism coming back to play in Boston for the first time with fans in the stands at TD Garden #WBZ #Celtics pic.twitter.com/pdE3p8bQpx

All this said, Boston does have a reputation for being a racist city. I definitely observed it growing up, but a lot has changed since then. Kevin Garnett, also not one to mince words just this month said his only regret in his career was not coming to Boston sooner.

The national media is going to have a field day with Kyrie's quote. And maybe Irving will get less jeers from the Garden crowd, since they might not want to be brushed as racist. Maybe that was a goal of Irving's? Who knows? One thing that is for sure is that every fan base has their share of idiot fans. Pick a fan base and you'll find hundreds of thousands of fans who are good people, but you will also have your assholes, homophobes, Anti-Semites, misogynists, and racists. And Kyrie's quote won't lesson the chance a true racist says something racist. That's unfortunate, but the truth.

“My only regret in any of this, is I should have came to Boston a little earlier.” -KG

🔥🤯 Can you imagine? ☘️🏆
pic.twitter.com/SHdivivmCN

Personally I thing Kyrie deserves to get the "booed in warmups, booed in player introductions, and booed every time he touches the ball" treatment. And if he was White he'd deserve it as well. If people want to call him a traitor, say he gave up on the Celtics in the playoffs, or call him Kyrie that should also be fair game. I mean LeBron James gets called much worse and has always had respect for Boston crowds. If Kyrie or the media decide to call these things "subtle racism" after the game on Friday well then that's on them. The fans who yell stuff like that be guilty of racism if and only if they are only yelling these things at Irving because he's Black. Pretty sure those same fans if Johnny Damon appeared on the Jumbotron would boo him still (16 years later and didn't even play basketball).

Now if someone does say something actually racist to Kyrie or anyone for that matter, then they deserve to be banned from the Garden for as long as the Celtics and TD Garden see fit. I think Irving will get less shite than guys like Damon or Allen. For one, it's been two years since he left. Two, fans are still excited just to be able to attend a Celtics game again. And three, where fans used to almost unanimously either despise or dislike rivals, I've seen a lot of love from Celtics fans on social media for Kyrie Irving the past year. A lot of love for LeBron James from Celtics fans for that matter. Guessing it must be a new generation thing where a segment of fans in their 20's think its unbecoming to say mean things about your opponent. That Celtics fans should "respect" them. Definitely a new phenomenon, but that will also temper some of the jeers. Lastly I do think some White fans now will be gun shy for fear of being called racist.

Perk responds to Kyrie’s comments by saying Irving always has to be “extra.” Perkins says he never has experienced racism in Boston & Kyrie is just trying to change the narrative. pic.twitter.com/p2gBWgWLMI