Hope everyone realizes how special a Hall of Fame class of KG, Duncan & Kobe is (Part 1) 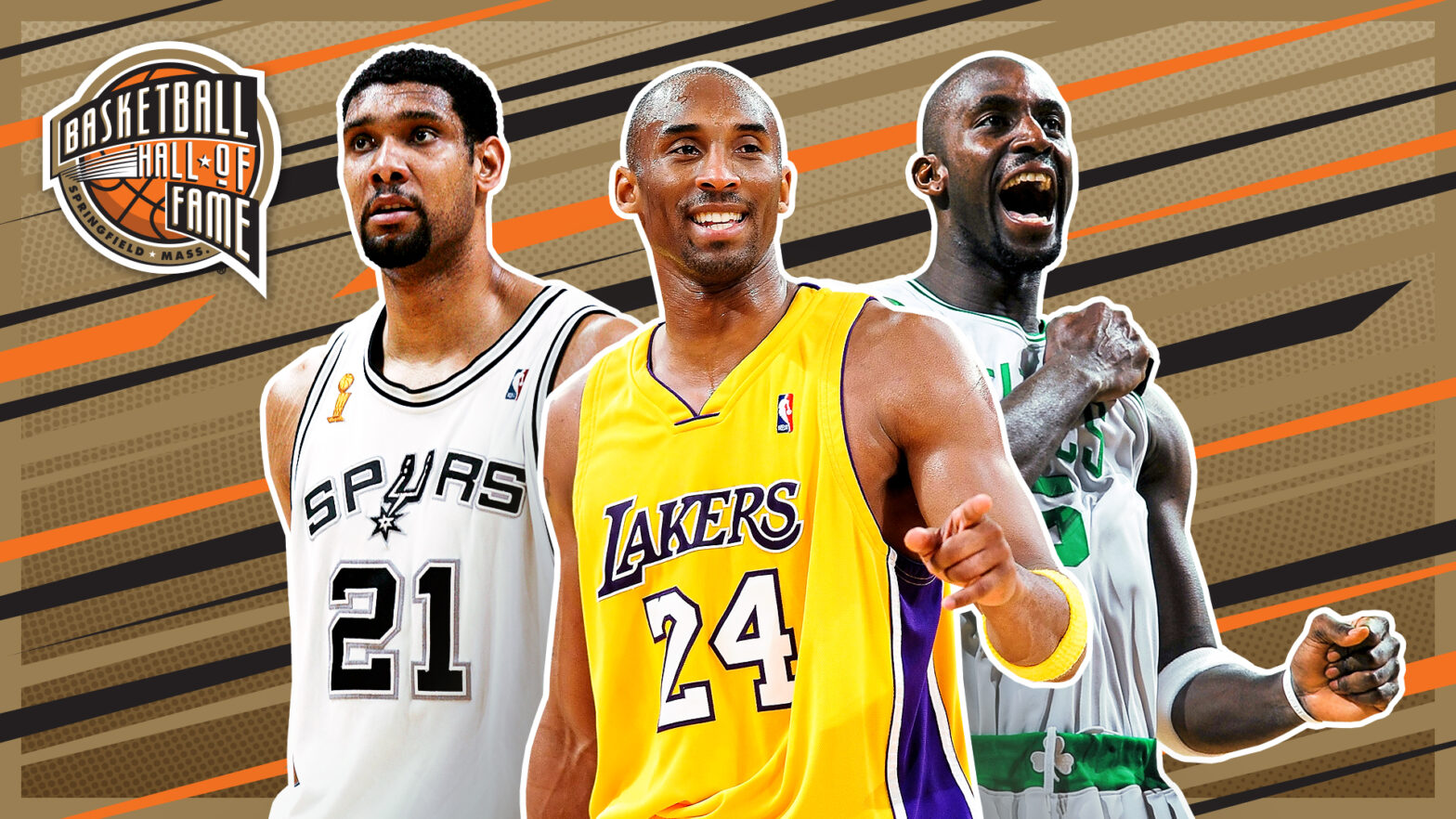 If you want a lengthy list of accomplishments by Kevin Garnett, Tim Duncan and Kobe Bryant, I suggest you read this list of 60 of them by NBA.com's Steve Aschburner I already wrote way too many words in tonight's Why Goodman's Jaylen Brown & Time Lord for Bradley Beal trade is not the answer post on Celtics Life so while I can't give my own 60 reasons here.... I'm still going to write way too many words again. I really do hope everyone realizes how special this Hall of Fame class of KG, Tim Duncan & Kobe Bryant is.

It's very rare to have three players that not only all played together, but were the elite players of an era all being inducted together. And while others will choose to compare them to each other I think we waste way too much time nitpicking on top 5 or top 10 lists of greats. Like Wilt Chamberlain and Bill Russell can both be all-time greats without that being a knock on Jordan, Magic or Bird. Or if people want to say how great contemporary players like LeBron, Durant, Harden or Curry are, no need to throw past greats under the bus in doing so.

Players like Bob Cousy, Elgin Baylor, John Havlicek, Dr. J, Oscar Robertson, Moses Malone, Jerry West should remain greats no matter how many years pass. There are enough legends for Dr. J to be allowed to make two all-time teams that don't include LeBron James without people having conniptions.

After the Magic/Bird era, you had the Michael Jordan era and then there was a bit of a waiting period to see who the next era belonged to. I'd say the most recent era is basically the LeBron/Steph era. But between Jordan's Last Dance with the Bulls and when LeBron's super team of him, Wade, and Bosh won a title on their second try in 2012 there's 16 years to be accounted for. While in that period, Shaquille O'Neal was the most dominant player and Allen Iverson at his peak was extremely transcending, the Celtics own Kevin Garnett, and these two contemporaries of his I believe personified that era between MJ's final title and LeBron's first the best.

Tim Duncan actually won the first title post Bulls MJ. David Robinson was at the end of his prime then, but still dominant enough for that title to really belong to both of them. Regardless it's a team game, so all titles belong to multiple players. But then Duncan went on to win three more titles firmly entrenched as the man on his team. And even snagged a 5th title in what I earlier called the LeBron/Steph era with the Spurs 2014 win.

Many Celtics fans (and even employees like Rick Pitino) felt the Celtics were robbed of the #1 pick in Tim Duncan's draft. Granted that combined with Boston tanking to the worst record in the league that season and a very underrated trade by M.L. Carr a year prior that not only enabled the Celtics to draft future All-Star Antoine Walker, but also gave them an additional pick at the top of the Duncan draft which meant more ping pong balls, there still was no guarantee. M.L. increased their odds with those two things, but it's not like they even had a 65 or 75% chance at the #1 pick. They more or less had a coin flip and half the time you lose those.

The reason I bring this up is because the Celtics through the 1986 season basically owned the league. Red Auerbach was just better than the rest of the GM's. People talked about "Celtics luck." If the Celtics didn't win the title one season, you should expect them to win the next. Then with the tragic overdose death of Len Bias two days after the 1986 draft ended, so ended the Celtics dominance. While Boston still has won more championships than any other city, the past 35 years has yielded just one. The Spurs starting with them jumping to the top of the lottery in 1997 and going all the way until Kawhi Leonard decided to sit out a year and demand a trade are likely the closest thing.

You had new stars getting added to great teams on their last legs to win more titles. You had a front office finding steals like Parker and Ginobili later in the draft. Using untapped sources like overseas. You had a GM not scared to trade one of their core players in George Hill for a shot at an even greater player in the draft in Leonard. Then when Leonard develops into a star, you see a guy like Duncan getting another title. All of this was very Celtics-like and Red Auerbach inspired. Think about Red's two greatest players. Red traded a 5-time All-Star to draft Bill Russell and he drafted Larry Bird one year prior to his rookie year. Pretty sure if Red had been born a couple decades later, he would have been one of the leaders in finding top international talent internationally. The Celtics didn't hit the lottery in 1997, the Spurs did.

If you want to imagine a world where the Celtics hit that lottery and instead of guys like Rick Pitino, Chris Wallace, and sorry even Danny Ainge running the show, just check out the San Antonio Spurs for the two decades that followed. The Tim Duncan era led by a front office of RC Buford and Greg Popovich. Not saying that even combined Pop and Buford equalled Red, and it should be noted that Auerbach made the aforementioned savvy trade for Russell, unlike the Spurs who landed Duncan due to Robinson being out for the year and lottery luck. That said, with Robinson at the end of his career and without the benefit of being a city that would attract free agents, the Spurs had to continue to be smarter than everyone else to sustain their success and add the pieces around their star big man.

While Duncan in his 17th year couldn't carry a team on his own to a title against a super team of prime LeBron, Wade, and Bosh, nor should he have to. It's a team game. Duncan was the backbone of those Spurs teams, just like Bill Russell was to the Celtics dynasty. And I'm sure players like Hondo had to do some more heavy lifting the final title of Russell's career. That doesn't diminish anything. Being able to win titles 16 years apart is amazing. And Duncan went four years to college so in his 17th year he's older than players of the past couple decades. And I have no doubt a great like Larry Bird would have won not only more titles while still in his prime with Len Bias in the 80's, but also at the end of his career with Bias and Lewis. People forget, Larry Bird was still a great player his final season in 1992. Injuries did him in, as well as less of a supporting cast. Again add a prime Bias to that 1992 team and that's a title team.

While Shaq won 4 titles during this period, Duncan was the best big man of this era in my opinion. And it's not because he won one more title. Between Kobe Bryant and Dwyane Wade (at least the Wade, Shaq won a title with), Shaq won all of his titles alongside top 3 players in the NBA. The only person as lucky as Shaq teammates wise has been LeBron James. They are outliers. It's almost always one superstar and the considerable step down. Even with Bird and McHale you knew who's team it was. Same for MJ and Pippen. And while Kareem is an all-time great, it was Magic's team in the 80's due to Kareem's age.

Tons of credit to Jerry West for drafting Kobe Bryant. Some credit, but considerably less for signing Shaq. As long as there is a Hollywood and there's beautiful weather there, Lakers GM's will always have a much easier route in building a contender. Tim Duncan didn't find a super team to join after Robinson retired. Duncan didn't complain that a late first rounder like Tony Parker and a 2nd rounder in Manu Ginobili weren't enough for him.

Duncan had a chance to join a super team in free agency in Orlando under Doc Rivers, but he chose to stick it out with Parker and Manu. Whether that super team would have consisted of Duncan and T-Mac or Duncan and Grant Hill doesn't matter. In hindsight he would have been better off with T-Mac as that duo would have likely been the league's best or on part with Kobe/Shaq, but at the time Grant Hill was the bigger star than T-Mac. The point is Duncan didn't take the easy way out. He stuck it out in San Antonio and won four more titles. And could have been 5 more if not for Ray Allen's 3-pointer after half the Miami Heat arena had left in 2013 accepting that the Spurs would be champs.

So when you talk titles, and I'm not talking by role players like a Robert Horry or a Steve Kerr, you have Bill Russell as the G.O.A.T, then a handful of his Celtics dynasty teammates atop the list. After that you have the 6-time champs of Michael Jordan and Scottie Pippen on the Bulls, but we all know who the man on that team was. You also have Kareem with 6 titles, but it should be pointed out that unlike Duncan, Kareem left his small market team after many failed attenpts at title #2. Kareem won his last 5 in L.A. Again, how many of those teams was he the best player on? And in 1987 and 1988 at least James Worthy had also passed him.

No disrespect to Kareem, but while Duncan went title-less while the Kobe/Shaq Lakers ruled the world, he stuck it through to win more 4 more in San Antonio. And like I said, if not for Ray Allen's buzzer beating shot, Duncan is in that class of 6 titles on one team. As the undisputed best player on the majority of them. That would of been a class of just 3 players to have in NBA history won 6 titles all on the same team and have been the undisputed best player on the majority of them. Again he only won 5, and some will argue that Robinson in 1998 and Leonard in 2014 were if not the #1 guy. were 1b, but Tim Duncan's accomplishments are a lot greater than one might think. This can happen when a player played in a small market and was quiet. While Duncan will never be in the G.O.A.T. discussion, he very much belongs in the Top 10's we see from talking heads every day. And if you wanted to say in the past 40 years of the NBA (so 1981-2021) Tim Duncan has been the greatest big man of that period, I wouldn't argue with you.