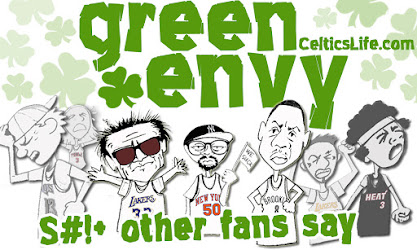 The Celtics have a lot of candidates for game of the year so far and this one is definitely right up there! We came back from down as much as 32(!!) and beat the Spurs behind the one and only Jayson Tatum. Tatum has had two new career highs this season and this one was the big Six-oh! He finally hit it and boy are we all happy it also came in a win! We looked abysmal in the first half, especially the first quarter, getting down as many as 22 points and 29 at half time. A loss like this is bound to have some fans salty so let's see what they had to say!
That was fuckin stupid
After that collapse and the remaining schedule, this season can really spiral out of control really fast
1st half: Celtics were absolute trash
2nd half: Spurs are absolute trash
-It was that rim.
Embarrassing.
Just pain. Say what you want about the refs late in the game the fact we had to get to this point after the start we had is pathetic
-You can't even really say anything to the refs. Demar took 20 fucking free throws.
I love this team but I don’t think I want to see them in the play in game anymore.
That kind of L will build character but also shameful as fk.
Who's ready for Curry to drop 70 on us in the play in game? 🙋‍♂️🙋‍♂️🙋‍♂️
Third largest blown lead in NBA history. What else is there to say?
Man we be giving a shit ton of players their career highs all season long.
(This one feel familiar tbh)
I’m not only emotionally hurt. I’m physically hurt too. I miss Derrick.
You gotta be kidding me
CLASSICkening
One of the most disgusting games I've seen.
The 32pt lead was a fallacy given the unsustainable shooting of both teams but to blow it in the manner we did....
I wish we got blown out by 50 than this happening
Look at Memphis keeping the lead, so inspirational.
absolutely fucking embarrassing, what a fucking joke team
stop fucking playing rudy gay, I don't want to see him anymore. play the fucking young guys
Pop deserves all the blame. The players too, but just baffling coaching decisions. I don't know man... what an embarrassing loss.
-I know what you mean but the complete contradiction in this made me fully laugh man
Alexa play: Marvins Room by Drake 💔💔
Are we a joke team at this point? Like I still believe we’re good but, this was a meme game. 60 points from Tatum man cmon
This man done torched us.
ESPN is about to love this 🤦🤦🤦
This could will be one of the worst moments since kawhi left. Just wow wow wow
I don't know if I can fucking watch this team anymore
Knicks fan here. Honestly what is your offensive game plan? You guys just jacked up horrible iso twos the whole fourth quarter. Not the Spurs I'm used to seeing!
When does next season start?
Our so called Veterans be playing like rookies.
Embarrassing fucking game what the fuck was that fucking bullshit how did we fucking blow that in a matter of two quarters
Didnt expect to be this upset over a game I didnt care that much to begin with.
Spain but the S is silent
Spurs fans: Hi, I'd like a relaxing game with a comfortable lead pls.
Spurs: Sorry, the clutch machine is broken. Is a heart attack ok?
We are on the other side of the best comeback this year and it is painful :(
Got outcoached by Stevens at the last minutes at OT...
No excuses, not even the refs when you blow a 32 point lead
I'm done with this team this season
IDGAF Horrible coaching at the end. HORRIBLE. in my 34 years watching the Spurs, that was just HORRIBLE. Pop, inv me to the retirement party.
-“fuck you pop” “let’s chill tho”
Worse than that time when a guy named T-Mac made a comeback againts us. Now a guy named Tatum torched us out.
I turned it off towards the end. My eyes began to bleed
As much as I hate the Celtics, I gotta ask...Does Jason Tatum have partial ownership of the spurs now?
Basketball is stupid anyway
Holy fuck. Jayson mother fucking Tatum. (Same, tbh)
That’s okay. I'm just gonna go home, lie down and listen to country music…the music of pain.
What this game taught me:
1. Brad Stevens is a terrible coach.
2. Popovich is worse.
I kind of like hearing you guys whine now. Bunch of babies lol
Wow, damn. No offense to you guys but Pop has lost it.
This is right below the Ray Allen shot, fuck this.
Get Rudy the fuck off this team
Just let the Pelicans get our spot in play-in tournament. fkkk
lmao this is just a ref league and we just living in it.
All the players on this team deserve to walk home after giving up a huge lead like that.....smh (this includes Pop as well)
Ugh we deserve to suffer and lose to Steph's Warriors in the play in tournament
Do you remember when Pop was famous for having good inbounds plays? Turns out, maybe it was just Manu and Timmy...
I’m done watching this season. I’m no longer willing to torture myself. Go Spurs Go.
My heart man it can't take this anymore 😭
Bullshit call gonna cost us the game
-Bullshit call is the only reason it's in ot. Demar "5 steps" derozan (I will now forever call him this LOL)