Celtics stuck in 7 seed as they fall to Miami 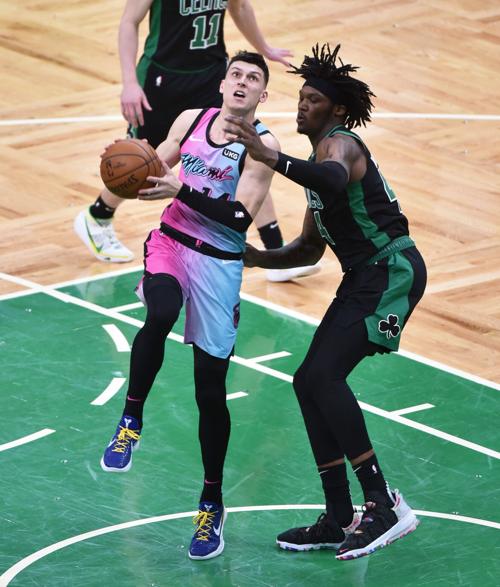 The Eastern Conference Finals rematch didn't go as planned for the Celtics as they lose 130-124. The Heat came out very strong as for the third time in their last five games, the Celtics have allowed another 70-point first half. They seen themselves once again trying to claw their way back into the game in the second half, but as we can see, that's not going to get us many wins against playoff teams. The C's big comeback fell short to drop to 35-33, and it's looking more and more like they're going to have to gear up for the play-in tournament.
Tatum couldn't really get going until the second half, but finished with 29 points on 11/15 shooting. He turned it up a notch during Boston's second half comeback, but it wasn't enough for the W. JT also added 5 rebounds, and 4 assists. Evan Fournier stepped up today and scored 30 points to go along with 8 assists. Kemba Walker took 12 shots today, making 5 of them, as he finished with 18 points. Kemba had a very slow start and was really only able to get going in the 4th quarter. Not the performance we want from him if we want a shot to beat Miami without Jaylen Brown.
Aaron Nesmith had a nice game with 16 points. This kid hustles, and he's been getting the recognition for it. He's been showing heart playing tough until the whistle is blown.
Miami had a fun time playing us today. The Heat had all 5 of their starters score 10+ points. Jimmy Butler had himself a great game with 24 points, 7 rebounds, and 11 assists. Jimmy played great, and is such a fun competitor to watch.
We'll get another look at Jimmy in our next game as we have a rematch against the Heat. That game will also take place in Boston as it'll tipoff Tuesday at 7:30. This is a big game, and it should be treated as if it's a playoff game. Let's hope for a different outcome. Happy Mother's Day!
Read more from George Dimis HERE!
Follow me on Twitter: @GWDimis