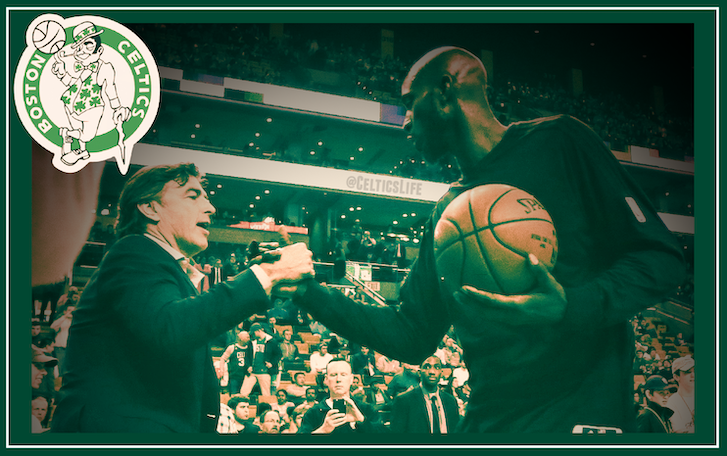 One name keeps popping up as the solution to so many of the Celtics problems. And it's the same name that we were searching for fourteen years ago. Kevin Garnett.

KG turns 45 in a month so you're not bringing him back to play. And he has no head coaching experience, nor has he ever expressed an interest in being one, so scratch that option as well. While KG has worked with players, I don't see him coming back to be an assistant coach. No to bring KG back Wyc Grousbeck should make Garnett the offer he can't refuse. And that's to come back to Boston in a coaching/mentor/ front office role, but also to become a part owner of the Celtics franchise.

According to KG, the late Flip Saunders told him he'd be getting a part ownership stake in the Minnesota Timberwolves upon his retirement there. After Flip passed, Wolves owner Glen Taylor allegedly rescinded that agreement. This is the cause of the bad blood between the two men and why KG has called Taylor a snake among other things and why the Wolves haven't retired his number. Pretty sure Garnett has said he'd take no part of that ceremony.

Last summer KG temporarily played nice with Taylor as he attempted to purchase the Timberwolves. But then recently there was another conflict between the two when KG announced that his group would not be the winning bid in the sale. Another he said, she said ensued and here we are. KG has hinted at trying again with a team in Seattle or Las Vegas, but that would entail a current team moving or league expansion.

Kevin Garnett was nicknamed the "Big Ticket" for more than one reason. Yes he put people in the stands. You wanted/needed to get a ticket to see him play. But he also made a lot of money in his NBA days, dating all the way back to early in his career. This was before max contracts and rookie scale limits. Garnett is wealthy enough to own more than just a small piece of a team. Many teams in professional sports have celebrity owners, but most often they only only a tiny fraction of the franchise.

I obviously can't speak for Wyc or the other Celtics owners in terms of how big a piece of ownership they'd be willing to give up. But if you're KG you could wait to have a larger stake in a team down the road or you could take a smaller percent with the Boston Celtics right now. The first option is also not a guarantee. Lots of super rich people have tried to own professional sports teams and after several attempts they give up.

Garnett could buy into the team or that could be a part of his compensation for whatever fancy title is given for his coach/mentor role. But you'd be adding Kevin Garnett to your franchise. You'd have him around to help turn Robert Williams from a potential star to a super star. Imagine Time Lord's abilities with a little KG thrown in? And while Time Lord is the obvious choice for a player who could benefit from KG's mentoring and coaching due to both being big men, KG I believe would have a huge impact on other young players from Jayson Tatum and Jaylen Brown on down.

You want the Celtics to have an identity? KG can for sure help with that. You want our young stars to become better leaders? Yes KG can do that. Shaq says Tatum needs to be more of an alpha male? Well I got a good idea of someone that could help with that.

The Celtics had a different ownership group back then, but they dropped the ball in letting a Celtics legend in Larry Bird become a Coach of the Year and executive of the Year in Indiana. Sure Bird was from that state, but he had a pretty meaningless role with the Celtics after his retirement.

Maybe they did offer him the role that went to M.L. Carr, and it was just a year or two too early for Bird to commit. Or maybe he did prefer Indiana, since the Boston media can be rather ruthless when you're losing and a year after Bird retired the team hit rock bottom after Reggie Lewis died.

Other Celtics greats like Bill Russell, Tommy Heinsohn, Tom Sanders, Dave Cowens and K.C. Jones all coached the Celtics. The Celtics went outside the family in the 90's with executives and coaches like Dave Gavitt, Rick Pitino, Chris Wallace, and Jim O'Brien, but then brought back a former Celtic in Danny Ainge in 2003 to be president. Ainge wasn't really a Celtics legend on the level of Russell, Heinsohn, Jones, or Bird though. And Ainge seems to have built up a repuation over all these years that is making other executives weary to deal with him.

I'm not saying Ainge should be fired. I'm just saying the Celtics could benefit from having a KG in the room when trying to sign a free agent or to help broker some deals. Does a player like Anthony Davis refuse to re-sign in Boston if KG is part owner and a part of the basketball ops?

On April 25, 1950, Charles “Chuck” Cooper made history when he became the first African-American player to be drafted by an NBA team. A former All-American at Duquesne, he played for the Harlem Globetrotters, Boston Celtics, Milwaukee/St. Louis Hawks, & Fort Wayne Pistons. #BHM pic.twitter.com/PXi6iB46Lq

Additionally the NBA has admitted that they do not have enough people of color represented in the ownership ranks. KG having a seat at that table would be progress. Remember the Celtics were the first team in NBA history to draft a Black player. They were the first team to have an all Black starting 5. They were the first team to have a Black head coach. The last three Celtics championships have been won with a Black man sitting in that head coaching seat. Add in Bill Russell's two from the 70's and the vast majority of NBA championships won by Black coaches have been in Boston. So while KG becoming an owner in Boston wouldn't be a first, it would continue the Celtics tradition of giving Black men opportunities that other organizations have been slow to do.

Even if KG only stuck around for 5 years or so and eventually became a higher staked owner of another franchise, it would still be worth it in my opinion. Plus we still talk about the 2008 championship like it wasn't 13 years ago. If KG could help bring another banner or two to Boston by coaching and mentoring Jayson, Jaylen, Robert, etc, that's a pretty immeasurable lasting effect.

Look I'm not naive when it comes to the business aspect; the Celtics owners aren't just going to willingly give away wealth. They'd have to feel like the ownership compensation to KG would benefit them adequately as well. Put it another way... If KG's group's offer to Glen Taylor to purchase the Wolves was the highest bid, they'd be the incoming Wolves' owners. So Wyc and the other Celtics owners could talk to KG and find out he wants too much of an ownership stake for the services he'd provide or what he was offering monetarily and this idea could end up dead on arrival.

Fans want the Celtics players to have someone that will get on their asses. That could be KG. They believe Time Lord can be a star. Lots of players have the potential, but to reach that level and bring it every night isn't so easy. KG could help with that. And I'm just repeating myself, so insert "He'd also help with Tatum/Jaylen, and bringing talent to Boston, etc."

Now's when you at least comment, "Well Anything is possible."