Celtics drop another ugly loss, but have a chance at redemption tonight 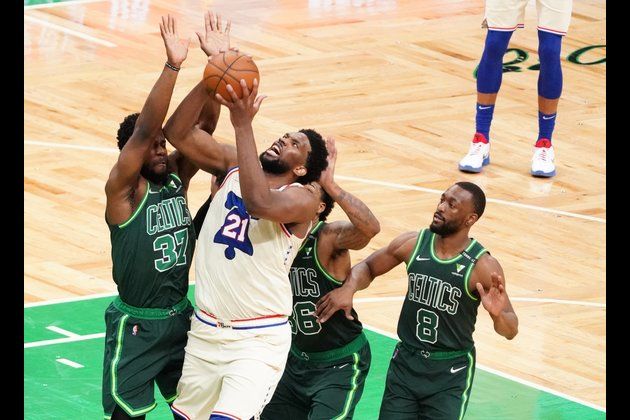 Pain. This season has been a pain for anyone invested into this Celtics season. It’s just one brutal loss after another. They just aren’t the team that they used to be, but we keep watching games because we keep hoping that they eventually figure out how to become that team that they once were. As bad as last night was, there’s no time to dwell on the loss. They have a good chance to redeem themselves against the Knicks tonight, but the Cs basically can’t do anything they did against Philly.

In the Celtics’ defense, they were pretty much doomed from the start last night. It sucks to have to keep on making excuses for this team, but the health and wellness protocols/injuries never end; they lead the league with 131 player days lost to COVID. The Fournier contract tracing seemed to have happened last second, so I’m sure that took some wind out of the Celtics’ sails; especially considering how well Fournier played in the last two games. It’s tough that we will most likely be without him for the rest of the week.

Last night we also got a taste of the much anticipated Embiid/Rob Williams matchup, with an emphasis on "taste". I expected Embiid to win the matchup, but in a different way. I should’ve known that Embiid would use Rob Williams’ inexperience against him to get him in foul trouble that easily. He’s really got to learn not to bite on the upfakes. I can live with last night's performance because it’s all a part of the learning experience for Rob; it was just really unfortunate because we have no center depth. If the Celtics got at least 20 minutes of Robert Williams, I would guarantee a different outcome. Luckily, Tristan Thompson comes back tonight, boosting our center depth.

So no Fournier and only five first half minutes of Robert Williams put the Celtics in a disadvantage quickly. Somehow the Cs were able to get a 35-31 lead on the Sixers in the second quarter, but the mistakes started to pile up. The game was lost on the 19-2 run that the Sixers had in the second quarter. During that run the Celtics had 6 turnovers alone, including four turnovers on four straight possessions at one point. They were unable to climb back after that. Credit to Philly’s excellent defensive strategy, but the Celtics are definitely capable of playing better offense. It also didn’t help that Tatum/Kemba weren’t shooting efficiently and that Jaylen only took 10 shots.

This about sums up the first half for the Celtics ... pic.twitter.com/9B627zzgyK

The Celtic’s defense was also all over the place last night. There were a lot of pointless double teams, ugly rotations, a lack of communication and just overall weak execution on that end. It would be a different story if it was Embiid just dominating as usual, but the reason they won the game was because the Sixers were able to execute against the Celtics’ lousy defense. Danny Green was hitting shots because they were wide open looks. The Celtics just can’t guard the perimeter like they used to, in fact they don’t defend like they used to in general. Here’s a good thread diving deeper on some of the Celtics’ miscommunications:

It’s bizarre the Celtics are making these kind of compounding defensive errors still. Tatum abandons the formation to rotate off Green after the pass, Brown sees the mistake & doesn’t x-out like he knows he has to at this point. Smart sees JB’s error & doesn’t fix himself... pic.twitter.com/It9nBGa3gp

So for the Celtics to win tonight against the Knicks, the best thing for them to do might just be to forget about last night and move on. The energy wasn’t there, they made a lot of gross mistakes and they just aren’t at the same level as Philly right now. It is what it is. Honestly, they are lucky that they have another game tonight so they make up for last night’s performance. They have to be locked in because this is a pretty big game. The Knicks and Celtics share a 25-26 record and whoever wins this game gets the seven seed for now. We’ve seen the Celtics come into the second day of a back-to-back and just lay an egg, so tonight has to be different; they have to play with energy and have a purpose.

On the offensive end they need to get back to passing the ball how they have been recently; last night was the first time the Cs had under 20 assists since they played the Wizards on Valentines Day. We also need to see the Jays take charge on the offensive end. I don’t want to see Jaylen dumping it off to Luke Kornet anymore. I want at least 18 shots from each of the Jays, especially with no Kemba. The Knicks are a very good defensive team (4th in the NBA in Drtg), but the Celtics’ two All-Stars should still be able to go to work against them. Defensively, I would love for them to figure out how to get to defend the perimeter more consistently, but that’s probably too much to ask. At the very least they need to hustle and be active on the defensive end of the ball. Containing Julius Randle will also be key to a victory. Most importantly, they need to fight their way to winning games. If the shots aren't falling, make up for it on defense. If someone goes down, someone else needs to step up. Dive for the loose balls, pick each other up when you're down and play as a unit.

It’s been an unfortunate season for the Celtics and a 25-26 record truly does suit them. At this point, you can blame almost anyone in the Celtics organization for how this season is going, but it feels pointless to me. It feels like any time the Celtics start building positive momentum, something bad happens. Could any team deal with the injury/COVID problems the Celtics have had? There will be time for more evaluation when the season ends, but for now let's just continue to hope for the best, I guess.