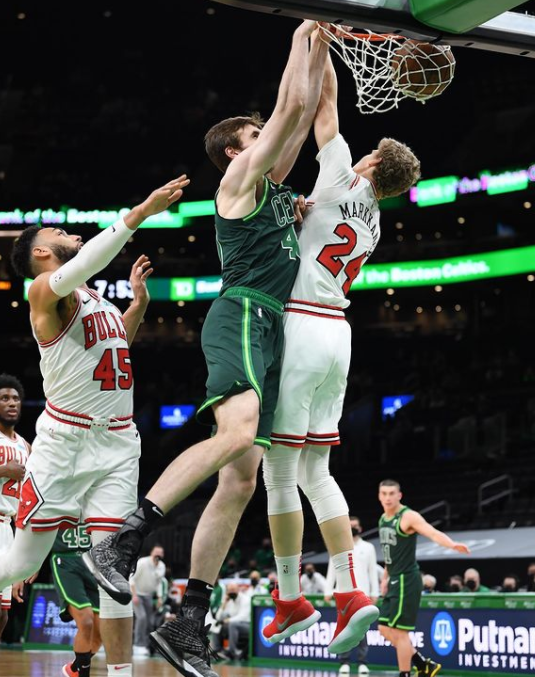 The Celtics and the Bulls battled it out Monday night at the TD Garden as the Bulls came away with the 102-96 victory. The Celtics' 6-game win streak comes to an end as they now fall to 31-27 on the season.
JB led the game in scoring for the C's with 23 points on 10/15 shooting. Jaylen was the only player for Boston to score 20 or more tonight. Jayson Tatum didn't have his best scoring night shooting just 3/16, but was able to secure his first career triple-double. Tatum has been close a few times this year, but was finally able to pull it off as he had 12-13-10 in this one in 37 minutes of playing time. Wasn’t the most ideal triple-double, but this should be the first of many. I’m sure he’ll have a better looking triple-double pretty soon.
For Chicago, newly acquired Nikola Vucevic led the way against the Celtics as he finished with 29 points, and 9 rebounds. The Bulls' best player Zach LaVine wasn't able to play in this game due to him being added to the health and safety protocols, but Chicago was still able to escape with the victory. Coby White was a huge piece in the victory as he scored 19 points while also adding 7 dimes. Solid night for the second year PG.
The Celtics' next game will be Thursday night against the Phoenix Suns. Phoenix has been one of the hottest teams in the NBA this season so it will be a tough task for the C's as they look to defend the parquet. That game will tip off at 7:00.
Read more from George Dimis HERE!
Follow me on Twitter: @GWDimis