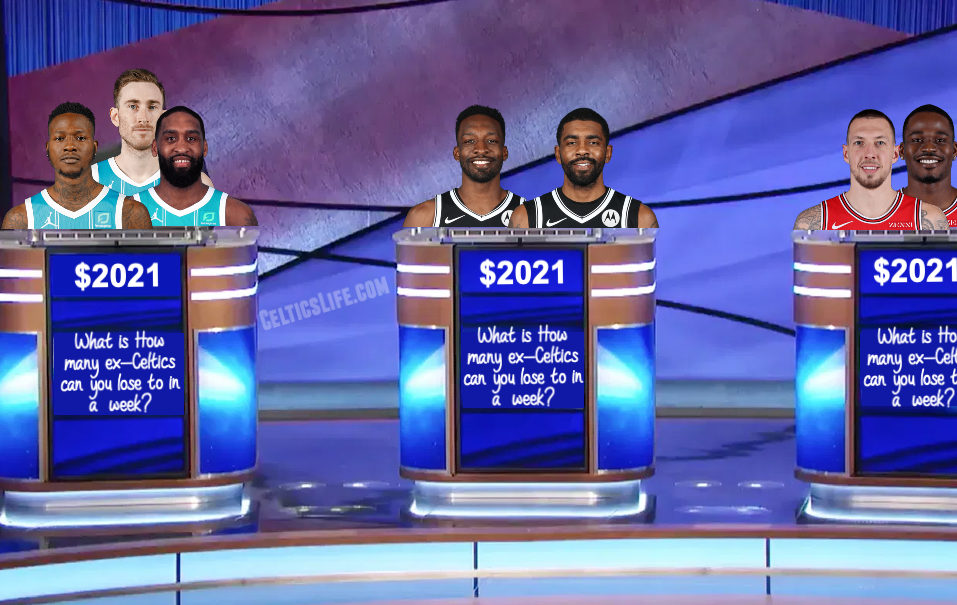 Goes without saying that the Celitcs have had better seven day stretches than this past one. There was a win over the Suns snuck in there, but letter of the week was L (Maybe we should have made this a 'Wheel of Fortune' spoof intead?). Boston did manage to snag a win against the Phoenix Suns in there within the losing, but overall the week was a large step back.

There was at least one silver lining in the downswing. The Celtics were super generous handing out W's to several of their former players on the Bulls, Nets, and Hornets. And thus when Final Jeopardy came around and the topic was sports with the clue of "7," (Not sure technically what this is called. If your answers have to be in the form of a question, what's the "clue" called?) it was easy money for Daniel Theis, Javonte Green, Kyrie Irving, Jeff Green, Terry Rozier, Gordon Hayward and Brad Wanamaker. "What is How many ex-Celtics can you lose to in a week?" Winners all around.

At least it wasn't 9. For one thing there are only three podiums. And secondly, Jae Crowder has always gotten on my nerves. From his fake tough guy act to his whining about Celtics fans wanting to add an All-Star (at that time) in Gordon Hayward to him just happening to be the guy who caused Hayward's horrific injury in his first Celtics game. Definitely don't think Jae wanted to hurt Gordon, but also think he was extra intense and physical defending that pass due to his bitterness and jealousy. E'Twaun Moore makes 9 if you are counting at home. But the Celtics took care of business that game.

The Celtics host the tanking Thunder tomorrow followed by a quick revenge match-up with the Hornets on Wednesday. Two wins right there not only will keep Boston out of Final Jeopardy this week, but will also help to get the team back on track.