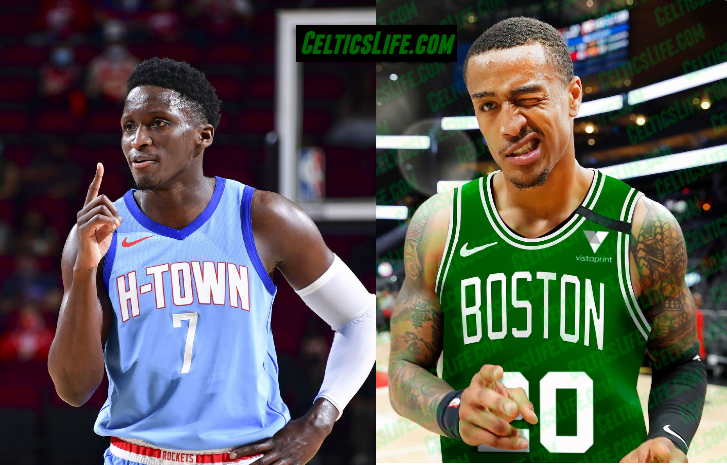 Danny Ainge told us that he would "most likely" use the traded player exemption (TPE) in the offseason as opposed to before the trade deadline.

He did leave the possibility open of making a deadline deal if the price is right. #Celtics

Despite what Danny Ainge said on our show this morning...I, for one, still think Danny is going to make a move before the trade deadline. #Smokescreen

Toucher and Rich know what's up. All these reports are out there about Danny Ainge aggressively trying to make a trade. Ainge needed to counter that publicly so the Celtics don't seem desperate to make a deal. There already is an apprehension from some teams to deal with Danny, becauese they feel like he's too hard to please. And GM's with less job security than Ainge don't want to be on the losing end of a trade with Boston and lose their jobs like Kevin McHale or Billy King did.

Honestly though I never thought McHale just did Ainge some favor with the KG trade. he received a super yoiung future All-Star big man replacement in Al Jefferson, another super young player with potential in Gerald Green, who thirteen years later was still playing in the NBA, a decent role player in Ryan Gomes and two first round picks. It should be noted that one of those picks could have been Steph Curry (McHale had been let go and Kahn made that pick), but even if we just call the pick Ricky Rubio as you can see the Wolves got a lot more for their oldr star than most other teams.

The other two big wins for Danny Ainge were trading a 1st rounder for the Suns 3rd point guard in Isaiah Thomas and trading for the Nets picks. Credit to Ainge for snagging Isaiah and credit as well to Thomas and Stevens for the success he had in Boston, but it wasn't like any other team couldn't have traded a 1st for Thomas. Other teams either didn't think Thomas was worth a 1st or weren't in the position to add a point guard at that time.

Scalabrine: “Celtics want Harrison Barnes … Don’t listen to all the smoke & mirrors about all these other guys” https://t.co/ZO5Ex3JVW2 pic.twitter.com/NtPCxaGW9U

And regarding the Nets deal, which will always be considered Ainge's crown jewel a lot of luck followed the Celtics with that deal. Many teams trade future picks that don't hit #3 or #1 in the lottery. At the time Deron Williams and Brook Lopez were both in their prime All-Stars. And Joe Johnson was a few years older, but still went on to make another All-Star team. It was really hard to envision a team with those guys falling off completely and becoming the worst team in the league. Most of that was due to Deron Williams falling off at a young age. But most people count on multiple time All-Star and All-NBA players like Deron to have sevral more good years at age 28.

Plus Kevin Garnett was still looking very good in both the 2011-12 and 2012-13 NBA seasons. I believe the Clippers had previously offered one of their young potential stars in DeAndre Jordan to the Celtics for KG. So it's not like some team was trading picks for some washed up Marc Gasol or anything. Plus you got Mr. Clutch Paul Pierce in the deal. The Nets added in another 1st to unload Geral Wallace's conract. Personally teams do this all the time and I think it's idiotic. Like the Boston media and fans saying the Celtics should trade two firsts just to dump Kemba Walker. I would not trade even one first to do that.

The only time I'd trade a first just to dump a player is like back in 2016 if you needed to make cap space to sign a young MVP type like Kevin Durant and you ran out of other options. I didn't like the Celtics trade of their third first rounder this past offseason when it happened and I like it even less now. The crappy return of two future 2nds was partly explained when dumping Enes Kanter's contract was later included in the deal. Sorry I don't think removing Kanter and his $5 mil left on his deal was worth givng up a 1st.

Trying to do a reverse look-up on BRK moves that may have salvaged their BOS trade. They later flipped KG to MIN for Thad Y. + a 1st. Then Thad for Levert. They also traded a pick to get D'Angelo & drafted Dinwiddie & Jarrett. Were any of those picks from the pick swap w/ BOS?

The Nets bottomed out, Danny struck out with some some of the picks, while hitting a homer on another, and a grand slam on Tatum. I rank the Jaylen Brown pick as "just" a homer which is obviously great, since at the time I wanted Ainge to trade down a couple spots and draft whichever of Jamal Murray or Jaylen Brown landed there. Either of those guys would have been great. Ainge did hit the jackpot the following year and traded that #1 pick for Tatum and a future 1st.

Now the part about Ainge being difficult to negotiate with I do believe. Mayebe he's learned some stuff from the whole Hayward/Indiana fiasco. But I think the idea that Ainge is some Red Auerbach that just fleeces teams left and right is false. My guess is if an objective eye viewed all of Ainge's trades over the past 18 years, they'd find that he won more than he lost, but it was closer to 50/50 than people think.
I do believe Danny about not trading for guys who would be difficult to re-sign in the offseason. The Celtics don't have the asset capital anymore to trade a combo of potentially good young players and future first on a rental. I'd argue its never a good idea to trade those assets for just a rental.

A lot of GM's are reportedly "ticked off" that Ainge tried to trade "damaged goods" Kemba Walker in the offseason https://t.co/siNiwKSOgG pic.twitter.com/3zEUFDEctn

Remember Ainge only completed the Garnett trade with the Wolves after he was granted prmission to talk to KG about a contract extension and they came to terms. As seen in recent years with all Celtics walking in free agency for contract numbers that the Celtics didn't expect they'd get, unless you're commited to maxing out John Collins or Victor Oladipo, there are no guarantees they re-sign. And even if Ainge was willing to max out Collins, I don't think we have a match trade wise unless you're willing to part with two of Smart, Time Lord, and Pritchard.
Oladipo isn't worth the max and I could totally see him getting an offer higher than expected in free agency just like Al Horford, Terry Rozier, and Gordon Hayward did. Shoot even Evan Turner and Kelly Olynyk got the brinks truck when hit free agency.


I think its all about the Kings now. Ainge wants Barnes. The Kings also have other players that they undoubtedly are willing to move and they are slumping and unlikley to make the playoffs. So they are a willing trade partner. But yes trades are still hard to make. Don't be surprised if the Kings insist on the Celtics taking Marvin Bagley back in a deal for Barnes. It's possible Ainge has no desire to trade for Bagley and that's why he's pessimistic of a deal. Also a possibility the Kings change their mind closer to the deadline and will trade Barnes alone.
My feeling is if Ainge wasn't a fan of Myles Turner then its doubtful he wants Bagley. They are different players, but I think Ainge only wants to pay a big man if he's elite. And Bagley certainly isn't elite (Reports are he's a sieve on defense). If the two teams can't come to terms on a barnes trade, don't be surprised to see a smaller trade for a veteran Kings big man like Nemanja Bjelica or Richaun Holmes. My guess is Bjelica wouldn't cost much to get while Holmes might fetch more. Then again the past few years I've wanted Ainge to get Holmes and he chose guys like Enes Kanter and Tristan Thompson instead, so maybe he just doesn't like him. Who knows?

One thing we do know is that a GM who publically claims 2 weeks before the trade deadline not to expect a trade, probably means it in the sense that its hard to make a deal, but its not the written in stone declaration that it might seem to some. He probably would have said don't expect a big trade two weeks prior to trading Kendrick Perkins at the dealine. Or two weeks prior to trading for Isiah at the deadline. More often then not those trades don't get made. But trust me Ainge is looking to make a deal as much as he was when he traded Perk. He's always looking.