P.J Tucker "decided that he was just not really with it" & has played his last game in Houston 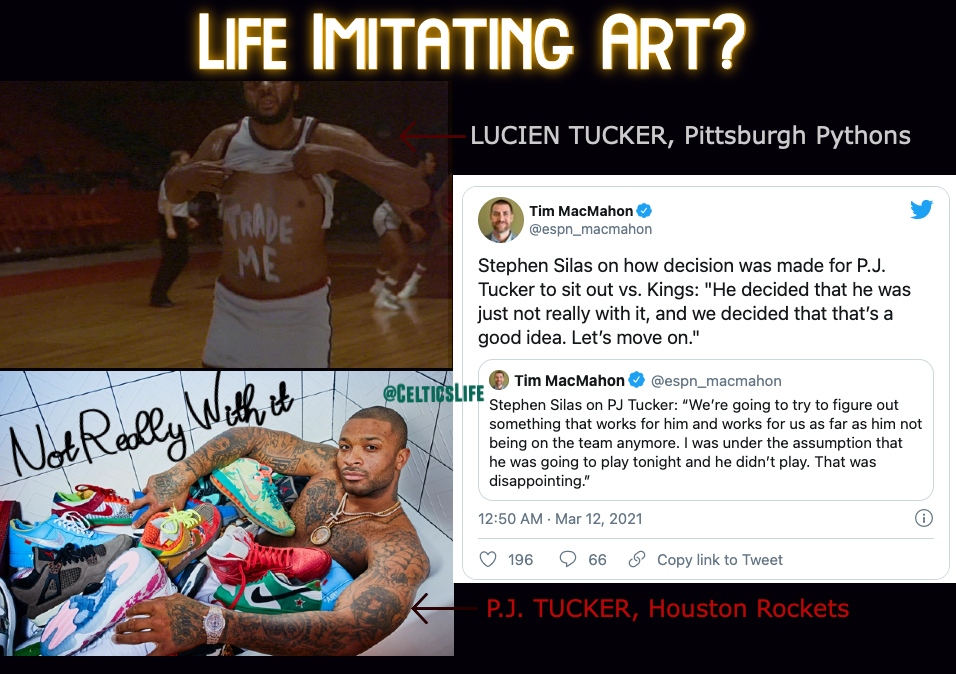 Must be nice to be able to make millions and tell your boss that you're not really feelin' it so you're not going to do any work today. #GuessItWorkedForHarden

Doesn't seem that long ago that players cared more about playing in games than hugging the opposing team after a loss. https://t.co/DgnyptYQUR

Stephen Silas on PJ Tucker: “We’re going to try to figure out something that works for him and works for us as far as him not being on the team anymore. I was under the assumption that he was going to play tonight and he didn’t play. That was disappointing.”

Cleveland's Andre Drummond, San Antonio's LaMarcus Aldridge and now Houston's PJ Tucker -- all away from their teams for good until they are either traded in the next two weeks (or bought out)

Too late for me to write much more than the tweet response, but if you remember the basketball movie "The Fish That Saved Pittsburgh," starring Dr. J, this should all make some sense to you. And yes, the Celtics are likley interested in Tucker. P.J, not Lucien that is. P.J. would defineitly help Boston. I just hate the whole sitting out trend.


Not sure how serious their injuries are, but pretty sure if NBA players only got paid for the games they played & the more a team won the higher their draft spot would be, all of a sudden you'd actually get to see the best players play every night like they used to https://t.co/BcjUJcct2h