For the first time in six years Danny Ainge made moves at the trade deadline, bringing in some new faces that Celtics fans might not be familiar with. Moritz Wagner (pronounced Moe-reetz Vahg-ner), a 23-year-old (turning 24 on April 26th) center out of Michigan joined the team following a swap of the Germans that sent Daniel Theis to the Chicago Bulls. Moritz, or more commonly known as Mo, was drafted by the Los Angeles Lakers in 2018, was traded to the Washington Wizards in 2019, and spent a few minutes being part of the Chicago Bulls before they traded him here to Boston on the same day they themselves traded for him.

Over his career Mo is averaging 6.8 points, 3.3 rebounds, 1 assist, and 0.3 blocks in 14.5 minutes per game. He shoots 49.5% from the field, around 30% from 3. The numbers may not jump out, but what doesn’t show up is the energy that he plays with. While he was listed as available to play against the Bucks this past Friday, the day after he was traded, Brad Stevens said that it was very unlikely that he would play since he didn’t have much time to meet with the team and learn the game plan. To most people’s surprise, Mo came in with about 10 minutes left in the fourth quarter and finished out the game in which was surprisingly close to a blowout.

He started out by hitting a corner three, his first shot as a Celtic, and funny enough it was the same shot that Theis missed against the Bucks just two days prior. It’s also worth noting that he is wearing #20, the same number that Gordon Hayward and Ray Allen wore during their stints in Boston, so expect him to channel into their powers and become an absolute beast and a sniper from 3 (to retain any credibility I have I must state that this is a joke…unless???).

He didn’t produce any Mo buckets but managed to pull down 5 boards. The stats weren’t great, but he brought a lot of energy, and it was fun to watch the bench celebrate his first shot. From looking at his time on the Wizards you can see that he works hard and has fun while playing, something that seems like it’s been otherwise missing from this season. The Celtics bench gets extremely animated during hot stretches and makes the game more fun to watch, one of the small bright spots for the team. Brad Stevens stated earlier that he wants to limit the big man rotation, so I imagine Mo will be more of a contributor on the bench than on the court.

On that note, before anyone has a chance to hate on this kid let’s just set the expectations straight. He’s young, his game isn’t nearly as polished as that of Theis, and he makes mistakes. Danny Ainge didn’t bring him in with the expectation of him filling Theis’s shoes. He brought him in with the expectation that he can save some money and take a chance on a young, unproven player. He’s a stretch big listed at 6’11” and he moves well on the court. He has potential and can help to stretch the floor and get defensive bigs out of the paint. That doesn’t mean he’s going to see a lot of minutes on the court, and he may not be productive every night he does play, but it gives Brad some leeway to tweak his lineups and get some different looks when Rob Williams and Tristan Thompson need a breather.

At this point Wagner is probably not part of the team’s plans for the future, but who knows, maybe he’ll exceed expectations and give us a boost off the bench. Afterall, the Celtics are 2-0 in games that he’s played. Let’s take it game by game and let him do his thing. He should be a fun player to watch, on and off the court. 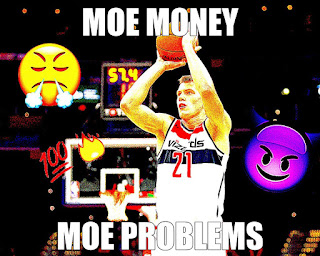