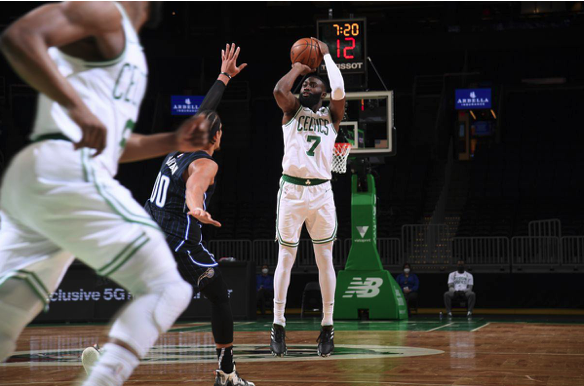 The Celtics are nearly 60 percent through their truncated 72 game season and are treading water with a sub .500 record while tenuously clinging to the No. 8 seed in the East. That’s an awful long way from the lofty expectations this team had entering the season and it has caused plenty of angst among the Celtics’ faithful.

Boston has always loved their Celtics and the venom and vitriol normally reserved for the Red Sox is beginning to rear its head towards this underachieving 2020-2021 squad. Even general manager, Danny Ainge, and head coach, Brad Stevens, are now in the crosshairs which is unusual for the previously bulletproof duo.

The Green has lost four of its last five with the most recent being a 132-126 overtime loss to the pedestrian Memphis Grizzlies. Of course, the excuse, of which there have been many this season, can be made that Boston was without two of its best players in Kemba Walker (night off) and Jayson Tatum (last-minute scratch due to illness).

"When you are missing guys like Jayson and Kemba, you have to win with a better defense," Celtics coach Brad Stevens said. "I think that's what we've been able to do in the past.”

It was the sixth consecutive loss on the second leg of back-to-back games with many of those contests being without Kemba Walker due to a cautious approach taken by the Celtics concerning his chronic knee problems.

"We started the year off great on the second night of back-to-backs, and have not been good the past month," Stevens said, later adding: "The formula doesn't change just because you played yesterday. You have to have the ability for guys that are fresh to impact the game."

And if we really want to put on our rose-colored glasses, we can point to the absence of Marcus Smart and Kemba Walker throughout stretches of the season as a reason why the C’s have been so disappointing. But the proof is in the pudding and if we take a gander at how the professional oddsmakers are viewing this year’s Celtics iteration we can check a BetOnline review and find Boston is the 11th choice at +4000 to win the NBA championship.

However, a championship banner will not be hung in Boston this season. Not with this crew. There is a distinct lack of leadership and two of the brightest young stars in the league, Jayson Tatum and Jaylen Brown, seem to be playing for the stat lines on the scorer’s sheet rather than notches in the win column.

Celtics’ fans are itching for Ainge to swing a trade or do something that will give the team a shot in the arm but trading just for the sake of trading is never a good recipe for success and this team, regardless of who they can deal for at the trading deadline, will not put them in a position to compete with the likes of Philadelphia, Brooklyn, or Milwaukee for an Eastern Conference title. It’s just not happening this year and the sooner they get out from under Walker’s contract, the better off they will be.

Nevertheless, desperate times call for desperate measures and the word on the street is that Danny Ainge is looking to make a move, even if it's more for optics than anything else. Orlando’s wing player, Aaron Gordon, has been mentioned as a trade target recently and while the 25-year-old is a nice player, currently averaging 14.7 points and 6.8 rebounds per game, he would be infinitely more valuable coming off the bench for a championship contender than he would be in an evolving role on this team. Atlanta’s big man, John Collins, has also been the subject of trade rumors on Causeway Street and the 6’9 power forward would be a welcome addition to a lineup that needs to be more physical in the paint and around the rim. But while the Gordon deal would probably cost the Celtics a few first-round picks, landing Collins would be more expensive as Atlanta has expressed interest in moving him and Brandon Bogdan Bogdanovic as a package for Jaylen Brown. It is highly unlikely Ainge would include Brown in any trade talks unless it was for a top 10 player.

We will see what transpires over the next few days but whether Boston makes a move or not, it really won’t make much of a difference. Chances are they will get their act together enough to end the regular season as the No. 6 seed and then get bounced in the first round by whichever of the Nets, 76ers, or Bucks winds up in the third spot. Until next year Celtics fans.