3 guesses on who was scheduled to play tomorrow, but is now back on the injury report? 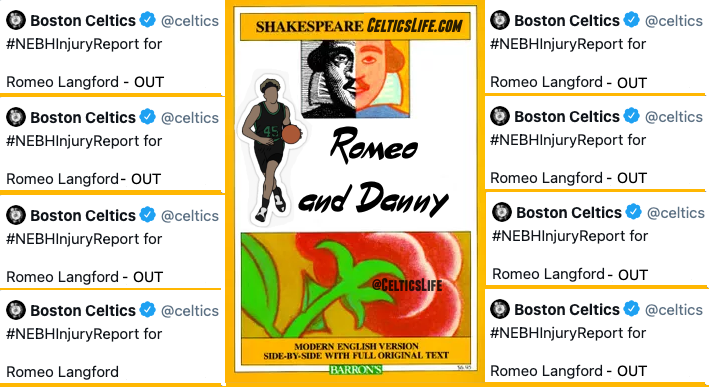 Romeo Langford did not practice due to health and safety protocols.

Brad Stevens said that he’s unlikely to travel on upcoming two-game trip. Another tough break for Langford because Stevens said he would have been eligible to play vs. Brooklyn.

#NEBHInjuryReport Coach Stevens says that Romeo Langford had been cleared to practice today, but was unable to participate due to health and safety protocols.

Bro, like can you have any worse luck? 32 games played in two seasons so far for Romeo Langford. And we won't be hitting lucky #33 this week unfortunately. The athletic guard who's one season at Indiana University was shortened by injury and then who didn't participate in the 2009 Summer League after being drafted by Boston is back on the "Romeo Langford #NEBH Injury Report," due to health and safety COVID protocols.

While Kobe Bryant gets the All-Star Game MVP named after him and Bill Russell the Finals MVP, Romeo will always have the injury report I suppose. I was really looking forward to Romeo rejoining the team. I think he could be a better wing addition to the Celtics rotation than what they might be able to fetch with packaging the TPE and a 1st. But alas we are back to waiting.

The Celtics haven't said when Romeo can return, but even when he can be back around the Celtics and medical staff, he will likely need a few more days to get back into game shape before hitting the floor. You were so close Romeo!

Hoping we don't hear of any domino effects in the next day where more Celtics are out due to a Romeo COVID connection. 🤞🏽