Why is Larry Bird the best Celtics player of all time?

Anyone who mentions the Boston Celtics will certainly refer to Larry Bird in conversation. Even those who are relatively unfamiliar with the NBA are aware of this player and there is no doubt that Bird has left an indelible impression upon his club over the years. Still, many die-hard fans believe Bird to be the best Celtics player in history. Why might this very well be the case? Let us take a look at some of his most formidable stats and achievements in order to better appreciate why Larry Bird is undoubtedly a legend in his own right. 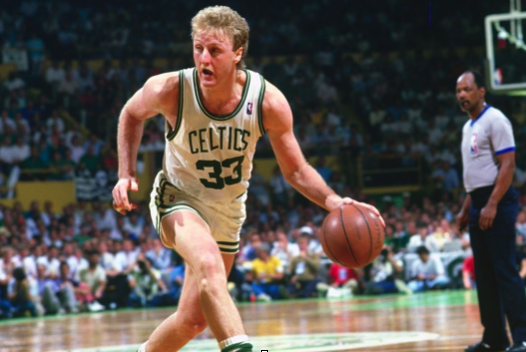 One of the challenges associated with basketball is that players are required to be extremely versatile while on the court. Of course, some are better at scoring points from farther away while others exhibit prowess from within the free throw line. Few personalities have been capable of bridging this gap and arguably, Larry Bird was the first do do so.

Citing the fact that he was the founding member of the 50-40-90 club, it becomes clear that Bird was a danger anywhere on the court. In other words, he shot 50 per cent from close to the basket, 40 per cent from the three-point section and a stunning 90 per cent at the free throw line. This made defending him extremely difficult. Often, more than one player would need to cover him at any given time. This gave the Celtics plenty of opportunity to subsequently mount a strong offence.

Larry Bird does not look like a very intimidating man. In fact, some would call him downright affable. This was not always the case; especially when the going got tough. It has often been said that Bird was at his best when things were at their worst and the pressure was on. Perhaps the best example of such a cool head was when he scored a triple-double during the 1986 NBA Finals.

Statistics do Not Lie

Statistics play an important role in any game. For instance, those interested in accessing online cites which offer jackpot-oriented platforms such as Mega Moolah will pay attention to figures such as the volatility of the game and the return-to-to-player (RTP) ratio. In the same respect, the statistics associated with Larry Bird cannot be overlooked. Here is a basic breakdown:

Younger Celtics players of these modern times will still have difficulty matching the figures mentioned above.

So, is Larry Bird really the best player of all time? This often boils down to subjectivity and personal tastes. However, it is impossible to deny the fact that he was one of the main personalities who made the Boston Celtics a household name. Even though new players are constantly emerging, Larry Bird is indeed one of the greats.