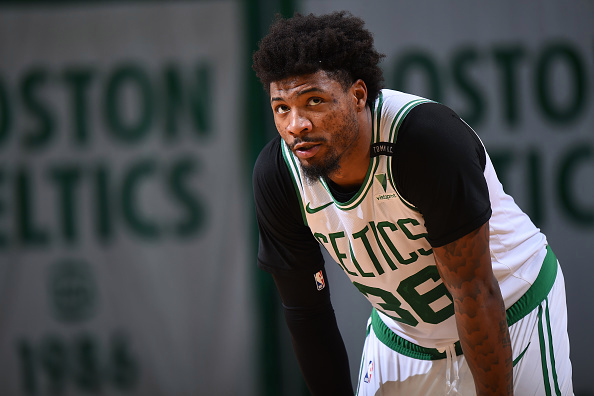 These last few weeks have felt pretty unbearable as a Celtics fan. They blew a 24-point 3rd quarter lead to lose to the Pelicans on Sunday, Luka hit back-to-back dagger 3s to take the win away from the Celtics on Tuesday, and the team got completely torched by the Hawks in Atlanta last night, losing 127 to 112. The whole month of February has just been a mess. They came in with a record of 10-8 and are now 15-17. In fact, this is the first time in nearly 6 years that the Celtics have fallen below .500 more than 10 games into the season.

"I don't feel much like an all-star." - #Celtics Jaylen Brown, referring to being named to his first all-star team while the C's fall below-.500 for the first time this late in the season since the 2014-2015 campaign.

When you watch the team play and you take a look at the roster there are a lot of notable reasons why the team is struggling so much this season. There are four things that really jump out to me: the lack of consistent shooting, the lack of playmaking, the lack of defense, and the lack of passion. I know of a player who can help to solve at least three of those things, and luckily enough Danny Ainge doesn’t have to do a thing to get him on the team. The man for the job is none other than our very own Marcus Smart, who has been out since tearing his calf in a 1-point loss to the Lakers on January 30th. 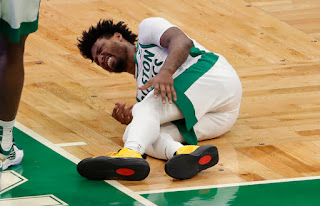 Man, oh man do the Celtics miss having him on the court. The team was 10-8 with him playing, although it is important to note that one of those losses was the game that he got injured in, and that 3 of those losses came with nearly half the roster (including Jayson Tatum) out due to Covid Health and Safety Protocols. It’s also worth noting that 2 of those 3 losses were against the Philadelphia 76ers who currently hold the best record in the Eastern Conference. If we were to exclude those 4 games, then the Celtics would be 10-4. If we exclude Jayson’s first game back from Covid, a loss to the Spurs, then that brings them to 10-3. Now you may say that I’m just stretching to fit the narrative, and honestly maybe I am, but allow me to present some numbers to help convince you. 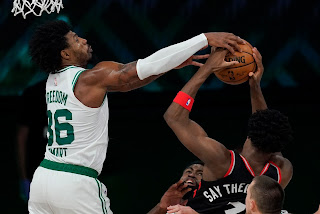 Let’s start with defense. Before getting injured Marcus was leading the team with 1.8 steals per game, which is .5 more than Jayson Tatum who is second on the team. The Celtics were 5th in the league in terms of defensive rating, 2nd in steals, and 5th in blocks. Since Smart has been out of the lineup the Celtics have fallen to 18th in defensive rating, 19th in steals, and 21st in blocks. That is a steep drop off, and maybe not all as a result of Smart’s absence, but he is definitely a major factor. Let’s be real, he made the All-Defensive First Team two years in a row now, and for good reason too.   Having him back in the lineup should help to hopefully prevent opponent from getting back in games where the Celtics have a big lead, as well as give the offense some more breathing room in close games. His ability to guard all positions can help to eliminate would-be mismatches. I also can’t go without mentioning the obvious “defense leads to offense” that has been missing. Once the defense tightens up there should be some easier opportunities on the other end in terms of transition buckets and being able to capitalize on defensive mismatches. 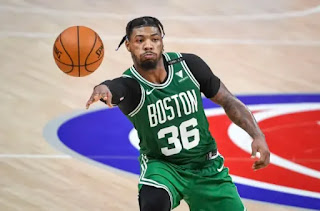 Continuing down that path, the offense has looked stagnant all year as a result of poor playmaking and shot making. Talking about those two is like talking about the chicken and the egg; Which one is a result of the other? Are we not making shots because we’re not passing the ball around or are the assist numbers low because we can’t make the shot after the pass?

Just by watching the game it looks like the ball doesn’t move very naturally, but rather as a result of a dead play. It exchanges hands a few times at the start of a possession to get Jaylen, Jayson, or Kemba in an advantageous position, but it never really seems like there are plays for set shooters, including those three. By that I mean it looks like we rarely have plays where Kemba, Jayson, and Jaylen don’t have to create their own shot. While Marcus isn’t the most reliable shooter, he excels at getting other people open shots. He leads the team in assists per game at 6.1 with Tatum being the next highest at 4.5 per game. Until Marcus got injured the Celtics were 11th in the league in Effective Field Goal percentage at 54.1%. Since his injury they have fallen to 24th at 51.7%.

Marcus Smart directly impacts the Celtics chances of winning and the numbers support it. Even then, the numbers only show so much. To truly see how important having Marcus on the floor is you would have to watch the games. He has always been criminally underrated by those who don’t watch him play since they look at the box score and say, “he can’t shoot so he sucks.” Celtics fans can also overrate him, but he seems to be the one player on the team who really embodies what it means to be a Celtic. He leaves it all on the court. He plays unselfishly and with passion. He may not be the sole solution to the team’s troubles, but he is certainly a missing piece of the puzzle, and a big one too. He likely won't be back on the court until after the All-Star break, so I recommend that all Celtics fans buckle in and lower expectations for the next few weeks. It helps to ease the pain just a tiny bit.