The Celtics came back to defeat the suddenly hot Washington Wizards as Jayson Tatum bested his St. Louis brother Bradley Beal to give Boston its second straight win. After Friday night's win Brad Stevens joked It just feels good to get a win on a day that ends in a Y and tonight the Celtics finally prevailed on a Sunday. More importantly they look to be building up some momentum with a couple more games to go before the All-Star break and the odds for their success are increasing. The Celtics face the Los Angeles Clippers on Tuesday, followed by the Toronto Raptors on Thursday to close things off before a week off.

Besides the heroics at the end recently named All-Star starter Jayson Tatum finished with 31 points on an efficient 12 for 22. He also collected 8 rebounds. Kemba Walker topped the 20 point mark once again with 21 to be exact (8 assists and 5 rebounds as well). Daniel Theis also added a 20 spot along with 9 rebounds.

Jayson Tatum says he's never been teammates with Bradley Beal before and he's hoping that happens during the All-Star game on Sunday.

The Celtics played this game without Jaylen Brown who sat out to rest his knee tendinitis. Bradley Beal led the Wizards with 46 points. Well led them to a loss I should say, but he was the game high scorer. Jayson Tatum wouldn't mind seeing Beal get a win in a week as he's hoping they finally get to be teammates at the All-Star game.

"We had to get a basket. And JT made sure we got a basket... That's what great players do." - Kemba Walker pic.twitter.com/1OoJSr0qTo

Jayson Tatum on comeback win: "It's something we can build on." 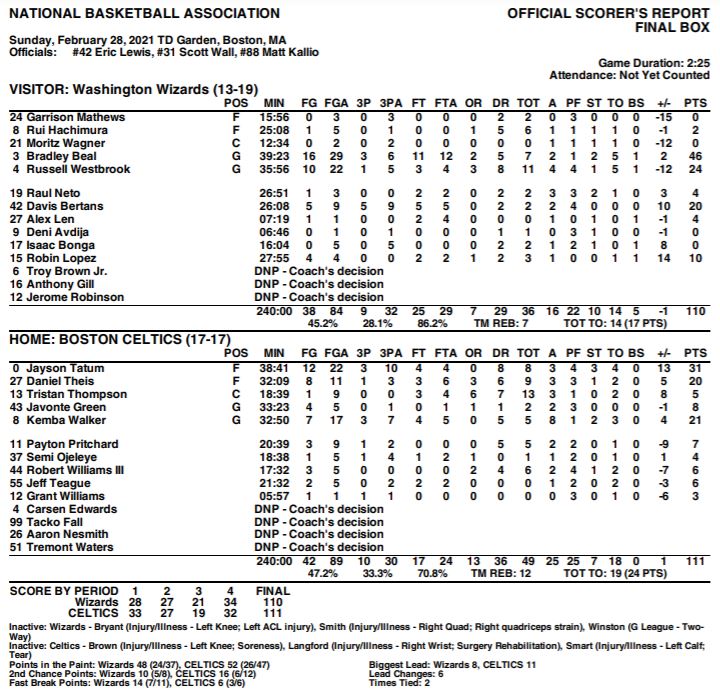