The Celtics fell to the Phoenix Suns 100-91 Sunday afternoon. Yet another disgusting loss for Boston. The Celtics were without Jaylen Brown tonight, but this was a winnable game. The C's now fall to 12-10 on the season.
Jayson Tatum led the way for Boston with 23-4-7 shooting 8/22 from the field. Tatum didn't have much help in this game at all. Theis and Thompson both had a solid night down low, but let's talk about Kemba Walker. Boy has he been AWFUL as of late. He finished today with just 14 points on 4/20 from the field. Celtics aren't going to win many games with him playing the way he did today. 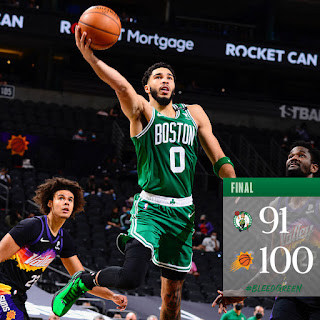 The Suns had their way with Boston. Devin Booker was just a few rebounds shy of a triple-double to finish with 18-7-11 . Deandre Ayton had a double-double as the Phoenix big had 16 points, and 11 rebounds. Mikal Bridges had a good game as well scoring 19 points to go along with 9 rebounds.
Not a game Boston wanted to lose. Even without JB, they should've won this game. Thankfully the Super Bowl is tonight as we get to take our minds off the loss. The Celtics now will play the Jazz Tuesday in Utah which will be another tough game. Time to forget about this game, and try to enjoy the rest of our day. Go Brady!
Read more about George Dimis HERE!
Follow me on Twitter: @GWDimis