Hey folks, this is the first of what is going to be a weekly blog featuring takeaways from the week and also updating you on the current standings picture and what we need to do to improve our positioning. The Boston Celtics finish the week with a 1-2 record after dropping a nail-biter to the Los Angeles Lakers last night 96-95, their second straight loss. After this two game skid, Boston drops to a middle of the road 10-8 on the season as we are now officially one quarter of the way through the shortened 72-game season. Lets take a look at the bitter ending of the Laker game before we get into my takeaways for the week;

THE LAKERS-CELTICS ENDING WAS CHAOS 😱 pic.twitter.com/dkHb64K6zw 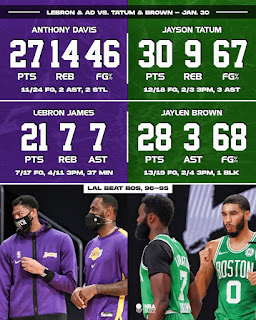 There were two bright spots in yesterdays game. One, the defense has been better of late and they may have had their best outing yet against a top opponent in the Lakers after limiting them to 96 points while they average 112. Two, the Celtics young superstars Jaylen and Jayson BOTH are proving they can lead this team anywhere. No matter who the opponent, they both go out and put up top ten scoring numbers every single night while keeping up the pressure on defense, getting teammates involved and rebounding. Here is a graphic illustrating how they did up against the Brow and the Goat. The worst development to come out of that game is the loss of the "heart and soul" of this team, Marcus Smart. JR has an update for you on smart HERE.

A major takeaway from this week is that Boston has been absolutely dominated while Kemba Walker has been on the court. Lots of people are calling for him to be moved (100% will not happen this season) but I'd give him the benefit of the doubt considering he just returned from a long hiatus and went from being the number two option a few months ago in last years playoffs to now being the clear number three. Also, the Jay's have gotten use to playing without him for the first month of the season and now all of a sudden their is a new guy that needs 15 shots a game. Kemba's plus minus for the week is a -12.0 at the same time that Tatum and Brown's are +8.7 and +9.7 respectively. That is a massive swing. In fact, he is one of just four Celtic's players with a negative plus minus for the week. The start of the fourth quarter against San Antonio on Wednesday made up most of that as Brad let him start the quarter with all bench guys and they got absolutely pummeled. Brad started the fourth quarter with a lineup of Kemba, Smart, Green, Williams III, and Grant. That lineup was out there for the first four minutes of the final frame and mustard up a grand total of two points. That is atrocious and probably made coach Stevens think twice about playing that lineup together again. Kemba was an overall -16 in that game. As an All-Star caliber player and supposed leader of this team, that is just not acceptable injury or no injury.

The Celtics have Finals potential if Kemba Walker can stay healthy and give them something in big games. Jaylen Brown's development is legit and Jayson Tatum is a borderline top 10 player. Kemba needs to be better.

My last takeaway from this week, Covid19 has had ZERO effect on Jayson Tatum and he is as good as advertised. Before the season I wrote a piece on how Tatum will grow as a playmaker this season and though his assist numbers are not eye popping, he has surpassed the eye test as a much better passer and decision maker this season. (Jaylen Brown has made a massive leap in this area as well). Here are a couple examples of how Tatum has improved, first with a baseline drive bringing a help defender over and then dumping off to Theis for the uncontested paint FG, and then coming around a pick and roll hits Javonte Green with a one handed (left handed) hook pass all the way to the corner where Green once again is wide open because Tatum force his defender to help.

Let’s get to the standings. After tonight, Boston sits in 5th place in the Eastern Conference half a game up on Atlanta and three games behind first place Philadelphia (14-6). The Celtics had three games postponed due to covid, two of which they’d be heavily favored against Chicago and Orlando. This team has severely underperformed thus far even though they have beat a few very good teams including Milwaukee. This upcoming week, Boston gets Golden State, Sacramento, Phoenix, and the Clippers in a very busy week. Three of those opponents are playoff contenders including the current best record in the NBA, the Los Angeles Clippers (16-5). Towards the end of next week or the following, expect the TPE trade rumors to ramp up as many recently signed players will become eligible to be traded.