Tacko Time for the Celtics? 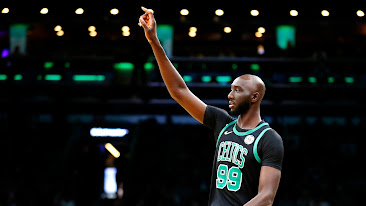 Could it be? Is it time?! It certainly looks that way for the frontcourt depleted Boston Celtics. It was announced today that center Robert Williams has tested positive for COVID-19, and that both Tristan Thompson and Grant Williams will be out for a minimum of seven days as a result of contact tracing. Luckily, Robert Williams is asymptomatic, but the ramifications of the diagnosis have heavily impacted the Celtics’ center and forward rotations.

According to a league source, Robert Williams was the lone Celtics player to test positive for COVID-19 and has been asymptomatic. Tristan Thompson and Grant Williams are out for contact tracing.

Starter Daniel Theis remains active for the Celtics, but behind him, there are few options available, aside from fan favorite Tacko Fall. The center has only appeared in one game for Boston this season, scoring two points in six minutes. However, Fall should have the opportunity to receive some expanded playing time given the number of inactive players for the Celtics.

Coach Brad Stevens could opt to play small-ball and potentially play Semi Ojeleye at the center position, but Celtics fans should have an opportunity to see Fall play. It’s disappointing it won’t be in person, as fans are still not allowed at the TD Garden, but any Tacko Time is greatly welcomed.

One important note to make is that as it stands, the Celtics will only have 12 (potentially 11) players available to play in tonight’s game against the Washington Wizards. Kemba Walker (knee) and Romeo Langford (wrist) both remain out, while Jeff Teague (ankle) is listed as questionable. The NBA requires a minimum of eight players to be available in order for a game to be played, so hopefully these precautionary measures prevent any more players from being unable to play for the Celtics.