Should the Celtics and NBC Sports Boston consider adding Kevin McHale as a part time announcer? 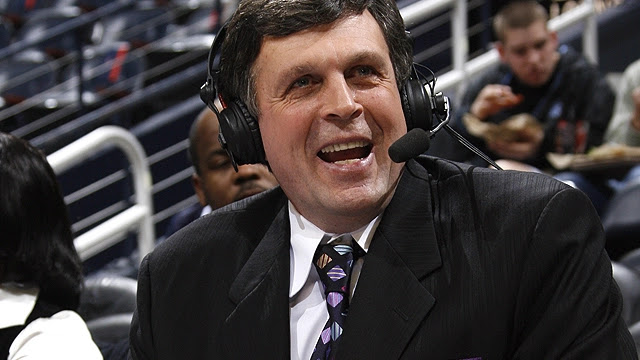 For the longest time the only color commentators I knew for Celtics games were Tommy Heinsohn and Bob Cousy. Heinsohn, while negative to the refs, was forever the optimist with his Celtics. Cousy while obviously a Celtics fan as well, was the realist. When Cousy lauded praise you knew it was very well deserved. At some point the Celtics unceremoniously let Cousy go, which made no sense and then it was the Mike and Tommy show until the latter's age and health called for some road game fill-ins.

Enter the Donny Marshall era. Seemed like a good guy, but wasn't a fan of him filling in for Tommy. Marshall wasn't even a former Celtic. Plus I didn't like how close he was with Ray Allen. You just knew that every anti Rajon Rondo rumor had Ray as the source. Along came Brian Scalabrine and I quite enjoyed him as the fill-in for Tommy. When Tommy did the color commentary, Scal was in the studio. When Scal did the games, Tommy was in the studio.

This offseason the Celtics family suffered one of its greatest losses ever when Tommy Heinsohn passed. I wouldn't be surprised if NBC Sports Boston was aware that this was a possibility. They quickly gave Scal the full time job. Scalabrine has also been doing double duty by also doing the postgame. Does this burn out Scal? One wouldn't blame him it did.

And I know there's been a lot of talk around social media, forums, etc that the Celtics should get rid of Scal. I disagree with that sentiment. Granted I've watched less of the postgame shows this season, so I don't have as large a sample size to go with, but the main complaints is that Scal is "mean" or "condescending" to Abby, Perk, or even Mike. I haven't seen that. I mean if any of the three disagree I'll take their words for it, but in the case of Abby for instance, I don't think Scal is being any tougher on her than he would be if a man had taken the role. Maybe the optics are bad, because people have said he's "bullying" her, but I wonder if that's unfair to Abby. Like she can hold her own. She doesn't need kid gloves because she's a female. But I digress. The point is Scalabrine should NOT be fired.

But I do think just like the Celtics need another piece on the floor, the broadcast crew could use another voice next to Mike. I've heard Kevin McHale do games on TNT as well as games with Mike and I think he'd be a fantastic addition. I seriously doubt Kevin wants to do all the travel that a full time gig would entail, but I think a part time role that allows Scal to not have to do double duty would help. Mike and McHale could call those games. Scal would be in the studio for those ones. How many games would Kevin be up for? 50%? 40%? 30%?

For the games that Scalabrine is calling, the White Mamba could either do double duty (if he wanted) or why not add someone like Isaiah Thomas for the post games? Anyway, if you were looking for a bash Scal post this isn't it. But I'm sure a lot of Celtics fans miss having an old-time Celtic announcing next to Mike. And not everyone is cut out for that job. Some don't have the voice. Some are simply annoying. Some are Magic Johnson. You get the point. McHale has always done a fantastic job as a color commentator. He has a history and rapport with Gorman.

No one will ever be able to fill Tommy's shoes. But since the role has remained vacant for a quarter of a season so far, it's time to use that Traded Announcer Exception on bringing in another voice. I'd choose Kevin McHale.

If McHale was brought in the first game on the air if I was Mike, I'd ask him to recreate these lines:

If anyone has a video clip of Gorman and McHale announcing a prior game together, please leave it in the comments section.