Low effort leads to a disgusting loss against the Knicks 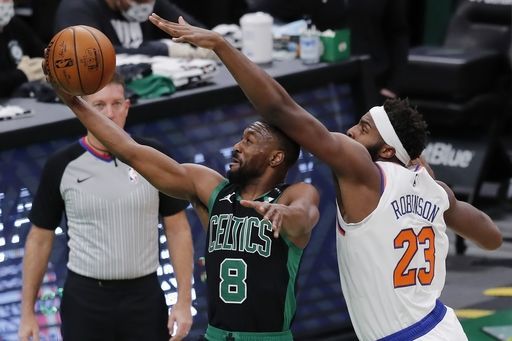 Yikes. That was the worst Celtics loss I have seen in a very long time. On the return of Kemba Walker, after a five game winning streak coming off a blowout win, the Celtics got demolished by the Knicks who were on a five game skid, in the TD Garden. It doesn’t even make sense. it would’ve been impossible to guess that this was the outcome of this game. The Celtics played so horribly that it was honestly a joke. I think this game is easy for them to learn that a bad loss was capable of happening, and then just forget about it. I kinda think this was a fluke, but it still sucked and is unforgiveable.

Credit to the Knicks because they clearly came out to play, and they played well. Tom Thibodeau is a good coach and they have some guys on the roster who can play, but this wasn’t a game the Celtics were worried about before and it showed by the amount of effort they played all game. The Celtics were slow, didn’t really have an offensive game plan, got destroyed on rebounds and let players like Elfird Payton and Austin Rivers do whatever they wanted. These are common themes in games where the Celtics just don’t feel like giving their best efforts, like against the Pistons a few weeks ago.

The Celtics pick and choose which of the games where they want to actually try and win, I think. I get that it’s a long season or whatever, but I wish they wouldn’t do that because this team is not good enough to take days off.

Team defensive wasn’t good by any means, but at least they only let up 105 points. But no one has seen the Celtics offense look that bad in a very long time. They put up a combined 50 in three quarters which was pretty embarrassing. They had 29/15% splits from the field and from three, both the worst percentages this season. They shot 62% from the free throw line, lost the rebounding battle (43-53, in favor of the Knicks) and had 17 turnovers. I could go in deeper to how bad this game was statistically but I don’t need to because if you watched the game you can tell that playing bad basketball in today’s game was contagious.

The Pistons game where they lost wasn’t as extreme, but showed similar trends. They came out with low effort, looked slow and didn’t play with purpose until it was too late. They shot 25% from three, lost the rebounding battle (44-47, in favor of Pistons), shot 50% from the free throw line, and had 19 turnovers. In these two games it’s not a matter of skill, it’s effort. The difference is that in the Pistons game, the Celtics had Tatum to bail them out at times.

I guess the only bright spot in today’s game was seeing Kemba Walker play. It wasn’t great overall, as he wasn’t able to break the Celtics out of the funk they were in (3-13 FG, 1-8 3pt). The good thing is that he was moving around well and he was active. He did have to leave the game after getting hit in the rib area, but it was expressed that he was going to be okay. At that point the Celtics were way too far gone and Kemba was at his minute restriction anyway. Also statistically, Jaylen still had a solid game (25 points, 9-20 FG).

Word from #Celtics medical staff: Kemba Walker is fine after taking a shot to the ribs. He was at his minutes limit for today either way.

I know people are going to go crazy over Twitter and start saying “the Celtics are better without Kemba”, “fire Brad” or stuff like that over this loss which is always kind of funny to me. I think people really expect the Celtics to win every single game. I’m not going to excuse them for this one though because they really need to start going into every game with a better mentality rather than choosing when to give effort. There are a lot of things that are inconsistent with this team, but this game was way too wacky to evaluate. I think this game will be an outlier when this year is done.

The Celtics all need to understand what went wrong in today’s game, then quickly move on. They should be super fired up for their two game series against the 76ers on Wednesay and Friday. They look legit this year and they are our biggest rival at the moment so they should want to prove themselves that game. Hopefully Tatum will be back by then, but if not there will be no excuse for them to get their asses kicked by them.

Brad Stevens says, "I don't believe that (performance) is who this team is." He later adds, "We had a clunker."