Is Jaylen Brown a MVP candidate?

At least one former MVP thinks that Jaylen Brown is in the mix for MVP honors... well at least he did a week ago. Magic Johnson who's known for hyperbole gets mocked way too often for his "overstatements." Personally I think his positivity serves as a nice balance to all the personalities who seem to make their careers out of being jerks.

Side note here, it was rather sad to research MVP candidates and the first rankings article I found was on nba.com written by the late Sekou Smith earlier this month. Rest in Peace Sekou.

Sekou had Jaylen Brown in his top 15, but his article was from January 8th, which was prior to Jaylen's explosion in Jayson Tatum's absence. You know when he was setting career highs on the regular and scoring the most points in less than 20 minutes by any NBA player ever (or at least in the shot clock era. One would assume it's Outkast' "ever ever" since no shot clock meant less shots).

To be a MVP candidate there's a fine balance between your team winning enough games and you being the main stat guy by far on your squad. With Jayson Tatum back that will make the latter much more difficult for Brown. Plus the media dubbed the Celtics Tatum's team long ago, so Jaylen is expected to be his Robin. One hopes that never causes an issue. 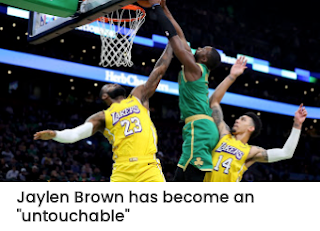 But onto the question at hand. Is Jaylen Brown a MVP candidate? Well if you were giving the MVP award for the first quarter of the season then absolutely. Does he have a realistic chance of winning the league MVP? Not this year in my opinion. Not unless Tatum goes down injured and no one wants that.

In the end, a Celtics player didn't win the MVP during their 2007-08 championship season, nor during their 2009-10 Finals run and what matters is ring. Yes you need MVP candidates to challenge for a title and the Celtics are lucky enough to have two potential ones. Don't see either winning this year, but the reality that we now have not just one, but two guys who are even in this conversation is a pretty great thing.