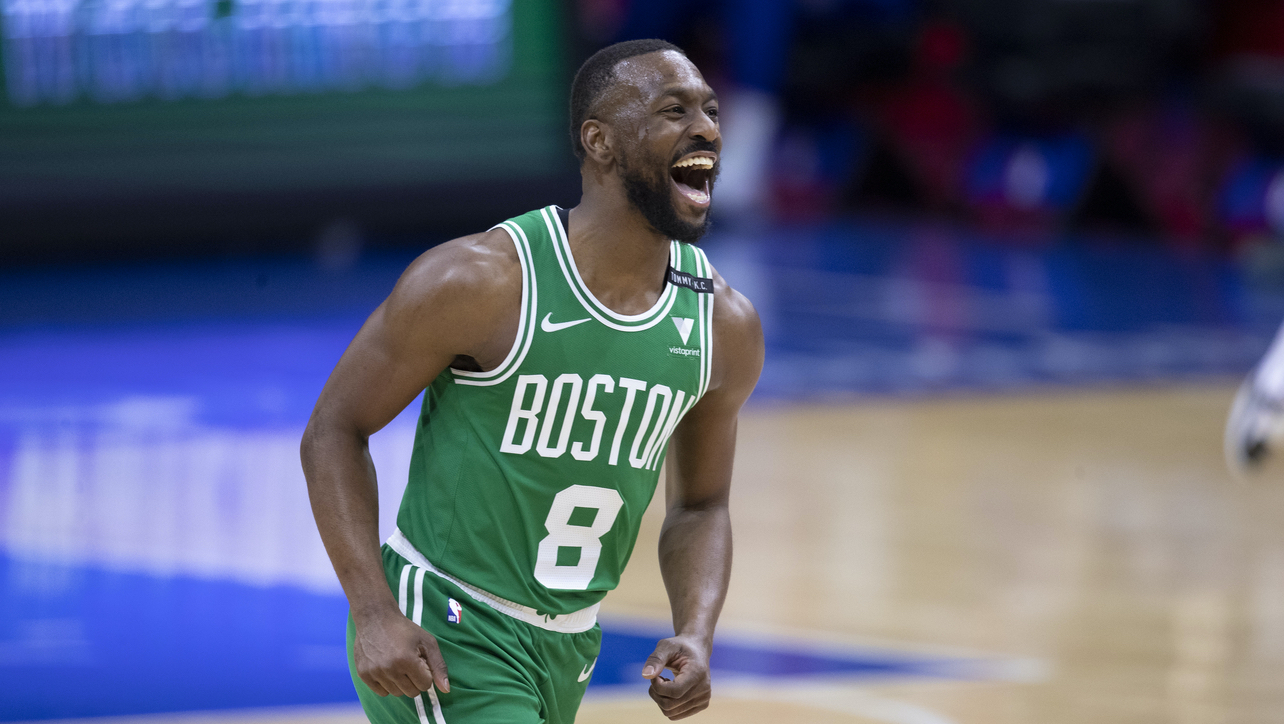 Kemba Walker made his season debut for the Celtics on January 17th as they took on the Knicks at TD Garden. He had been sidelined up until that point after receiving an injection in his knee to help strengthen it over the offseason. Last season it seemed as though the Celtics had been managing his knee pretty well, but with the abrupt pause of the season, followed by the quick ramp up heading into the bubble Kemba wasn’t able to have his knee at full strength for the playoffs. Kemba and the Celtics made the collective decision for him to receive the decision and take off the beginning of the season in hopes that he could come back stronger and with the capability of playing the full season and playoffs. He’s only 4 games into the season, and that too with a minutes restriction in each, but I think Celtics fans will be happy with what they’re seeing so far.
In Kemba’s season debut against the Knicks he got off to a really rough start, but he seemed to move well on the court. He finished with a final stat line of 9 points, 4 assists, 3 rebounds, 3 steals, and 5 turnovers on an abysmal 3 for 13 (23.1%) shooting in just 19 minutes. It is worth mentioning that only Marcus and Jaylen made more shots than him in what was just an awful team performance. I think it’s fair to attribute Kemba’s performance to rust and maybe even a lack of chemistry. Many players were just coming back from sitting out for “health and safety protocols” with other guys like Tatum and Rob Williams still out, not to mention that Kemba hadn’t had the chance to play with Tristan Thompson or Jeff Teague yet. Stats aside, this was a good opportunity for Kemba to see where he’s at in terms of his knee while also getting back into the NBA groove.

In the Celtics next two games, both losses to the 76ers, Kemba managed to pick up his game and showed a lot of promise. In the first game he had a final stat line of 19 points, 6 assists, 2 rebounds, and 3 turnovers on 6 for 15 (40%) shooting including 5 for 9 (55.6%) from three. He managed to significantly improve his efficiency and point total while also swapping 2 turnovers for 2 assists. He looked very comfortable navigating the floor and getting into his pull-up threes off screens, and he was able to bump up his minutes restriction by 2 minutes.
In the second of the two games against Philly Kemba got all the way up to about 29 minutes on the floor. Again, his efficiency increased up to 8 for 16 (50%) shooting, although he shot 1 for 7 (14.3%) from three. The rest of his stat line looked pretty similar to that of the first game, having 19 points, 5 assists, 3 rebounds, and 3 steals, but this time only with 1 turnover. The three point shooting was off for him, but he still showed overall improvement in most other regards. The trend continued as the Celtics took on the Cavaliers last night in a blowout win. With the lead they were holding Kemba only ended up playing about 24 minutes, although he likely would have been capable of playing more if it were needed. He had his best game yet with 21 points, 4 assists, 5 rebounds, 3 steals, and 0 turnovers on 7 for 12 (58.3%) shooting from the field and 3 for 5 (60%) shooting from 3. He picked apart the Cavaliers defense and moved the ball with no trouble. After the first game against the Sixers, he was asked about how he was feeling.

Kemba Walker on what he can do now that he couldn’t do a few months ago when his knee was hurting: “Everything.”

That alone is very exciting to hear. Kemba is rarely one to make excuses, and often times shoulders blame for bad performances in losses. Even then, during and after last year’s playoffs he made it clear that his knee was not at 100% and that it was affecting his game. To now hear him say that he feels like he can do everything on the court, and to see him back that up in his first few games makes me very excited to see what this team can do with Kemba, Jaylen, and Jayson all playing together. The three have yet to share the floor this season as Jayson has been out with Covid. Jayson will play his first game since being cleared from the virus tonight against the Bulls, but Kemba will be sitting out as it is a back-to-back and they want to give his knee some rest. Their next opportunity to play together will come on Wednesday as they take on the Spurs. That could be a very telling game as to how this team will perform together so mark it on your calendars!
Read more of Nirav’s writing here!
Nirav’s Twitter: @niravbarman27
Nirav’s Celtics Hype Videos here