Can the Tatum-less Celtics beat the 76ers in game 2? 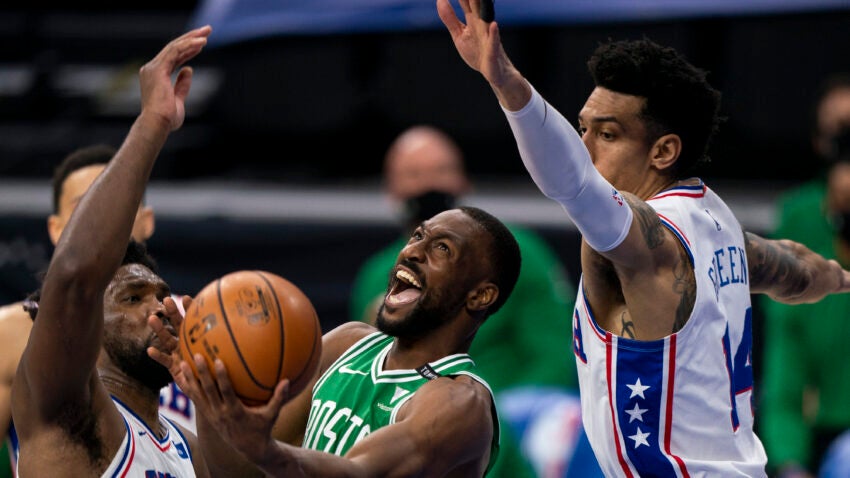 Honestly, there isn’t too much to be mad at about the Celtics/Sixers game on Wednesday in terms of how the Celtics played. Despite not having Jayson Tatum and Kemba being on a minute restriction, the Celtics were in the game the whole time and it was probably a game they should’ve won in the end, but Embiid just had one of those nights. You’re not gonna beat a team when their best player scores 42 points on 21 free throws. He has turned flopping into an art the same way Marcus has, so we shouldn’t be mad about it. Plus, Embiid gets doubled in the post often so he gets slapped and bumped every other possession.

That was my quick insight on the Embiid/Smart thing. Getting back on track here, the Celtics played with a great amount of effort for most of the game, and actually looked like a basketball team, compared to how they looked in the Knicks game. There were a lot of good things to take away from Wednesday's game. Kemba looked great physically once again, but this time he had a solid outing scoring 19 points (5-9 3pt) and 6 assists in 21 minutes. Marcus had his best offensive performance of the year, with 25 points (10-19 FG) and 4 assists. He scored or assisted on 16 out of the first 27 points in the third quarter. Theis had a 23/11 (10-11 FG) double-double, being the first player this year to accomplish that off the bench. And Jaylen continues to torch defenses, scoring 26 points. He scored 15 of those points matched up against Ben Simmons (5-7 FG), including this dope play.

So I mean, even though the Cs lost it wasn’t the worst, especially considering that we get to see a rematch between the two teams Friday night. Each team will have small changes: the Sixers will most likely have Seth Curry back, while the Celtics extend Kemba’s minutes restriction from 21 minutes to 25-28 and Robert Williams will most likely get some minutes in that game. Seth Curry being active makes the Sixers more dangerous because the Celtics will need to focus more on their perimeter defense. Robert Williams adds more athleticism and versatility to the lineup. Jayson Tatum has been ruled out of tomorrow's game, so without him it will take another full team effort if they want to tie up the mini-series.

I see two big issues with how the Celtics played on Wednesday night: playing defense against Joel Embiid and cleaning up the turnovers. If they do a little better in these aspects of the game, then they have a good shot of winning. Even without Jayson Tatum.

#NEBHInjuryReport for tomorrow vs. Philadelphia:

I said this in my last blog, there is no stopping Embiid, you can only slow him down. I don’t expect Embiid to have another 40+ point performance against the Celtics again tomorrow, but I do expect a 30 point double-double. I was looking forward to seeing how Tristan Thompson would do against Embiid, then I quickly wanted to see it stop after about the first quarter. Embiid scored 23 points while matched up with Thompson, shooting a perfect 7-7 from the field. Embiid had no issues there. Theis did a better job with him, only letting up 6 points on 2-5 shooting.

From looking at the stats, the obvious answer to trying to slow down Embiid is by starting Theis in the lineup tomorrow at the 5. I think that should happen because he Theis earned a starting spot at least for tomorrow, but Embiid could very well tool on Theis the way he did to Thompson. There needs to be more of a defensive game plan focused on Embiid and I had an idea that they could try that involves Robert Williams. Bare with me here.

When Timelord is in, the Celtics should go into a box-and-one zone, and have Timelord try and shut off Embiid. This may sound crazy or stupid or both, but theoretically it could work. The box-and-one is a defense where four players play in a 2-2 zone and then the other player sticks with one guy specifically. I would want Robert Williams to faceguard Embiid and try and limit the amount of times he even touches the ball. This isn't something that should be used all game, but they should use it to switch it up and force the Sixers to change their offensive game plan up more.

This type of defense isn’t seen much in the NBA, because it is pretty easy to beat. All you have to do is find the open player in the middle and force the box to collapse. It has its flaws but the whole point of using it is to stop a team's best player (Embiid) from scoring. I think with the right people in the game it could be worth a try. A Smart/Green/Brown/Williams/Williams lineup would be the best option I think. This lineup has the quickness to get out to the perimeter and defensive versatility, so it could be worth a try. If it doesn’t work then they just go back into the usual defense and scrap it. It’s still the beginning of the regular season. I wouldn’t mind seeing more zone defense in general though, but regardless I hope Timelord gets minutes.

Turning the ball over has been an issue for the Celtics all year so far. The Celtics are ranked 22nd in turnovers this season with 14.5 per game, compared to last year where they ranked 8th. On Wednesday the Sixers had 12 steals compared to the Celtics' 3. The Celtics also had 16 total turnovers, six of them being in the fourth quarter. The Sixers are a good defensive team, but some of these turnovers could’ve been avoidable, they just need to be smarter with the ball.

This turnover was super avoidable from Jaylen in hindsight. You can tell that he was simply just trying too much, and that’s fine a lot of the time because he's good at doing too much and succeeding. He drove into three guys when Pritchard was open on the other side for a three. You can definitely argue that he got fouled by Thybulle in this play here, but it still wasn’t the best idea. This is where we still want to see Jaylen improve his game, but I’m not too mad at him for this considering how well he’s been playing and how much he’s been improving.

Then in this one with the game winding down, Jaylen got the step on his guy but was indecisive. He drove hard to the hoop and he should’ve just gone for a layup and at least drawn a foul. I like the idea of giving it to Theis inside there, but he was in an awkward position to pass the ball. It looks like he could’ve gotten fouled here too, but I guess not.

Like I said before, the last game before was a game the Celtics should’ve won. They lost because their best players got cold, they made some costly turnovers and there was a hint of bad officiating. It’d be pretty neat if the Celtics could pull off a win without Tatum to tie up the series.