Breaking down the crazy ending of the Celtics-Heat game 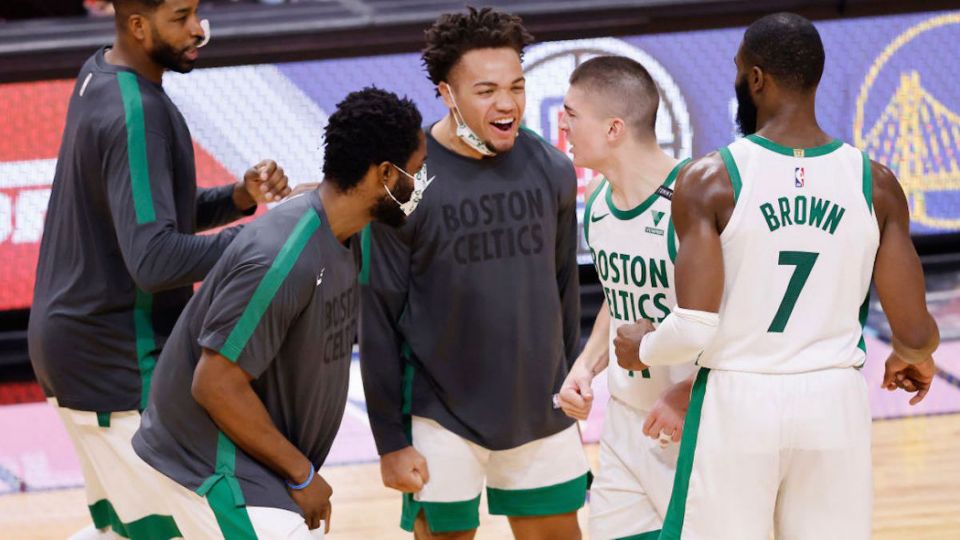 Well, the Celtics win over the Heat last night was good. Kinda. The Cs looked really great at some points and then really bad at other points. Considering that the Celtics were able to beat the Heat without Kemba and Teague, while Smart had one of his worst games of the year is pretty neat. But at the same time, this game should never have been close after watching the first quarter. The Celtics just love getting themselves into close games and stressing out their fans. It’s fine though, I’m having a good time suffering through each game.

The Celtics continue to play streaky, but still find ways to win games in the end. This time they started the game out well by winning the first quarter 34-26, then they didn’t reach that level of the rest of the game. They tied the second quarter 19-19 and then lost the third quarter 27-35, going into the fourth tied at 80 a piece. The fourth quarter was a battle until the Celtics went on a 10-0 run from the 3:11 mark to the 1:17 mark. At this point, it seemed like it would’ve been over right? Well, the Heat decided to have a 10-0 run of their own before FastPP decided to bail the Cs out. Let’s have a look at how this game almost turned into a nightmare for the Celtics.

So, at 1:09 Duncan Robinson enters the game for some much needed offense on the Heat. Robinson is extraordinarily good at moving off-ball and ends He passes the ball from out of bounds and runs across the whole baseline to get an open look. He uses Bam Adebayo’s screen, as Tatum or Smart can’t get around it and hits the three. Sure, we can live with that, as long as the Celtics are smart with the ball on the next possession.

On the next possession, the Celtics eat some clock which is good, but then don’t really follow that up well. I know Smart has been working on his shot selection, but he passed open a wide-open potential dagger three. Instead we end up with a Tatum fadeaway two in double coverage. In the L2M report, the refs said that there should've been a foul called against Jimmy Butler there, but regardless it was not a good take and the game dragged on.

This next sequence is just careless defense by Tatum. Butler grabs the rebound and finds Herro as they quickly push the ball down the court. In transition Tatum overlooks his assignment (Duncan Robinson) and instead complains to the ref about the missed call. It was a missed call, but in these situations you just deal with it and keep playing. So as Herro finds Adebayo open in the paint, Tatum slumps in for some reason, leaving a wide open Duncan Robinson in the corner. He then realizes that he messed up, flies over to the corner and fouls Robinson on the three point attempt. The L2M report claims that Tatum didn’t foul Robinson in the corner, which is super annoying, but that foul led to Pritchard entering the game. After that the Celtics were only up 105-102.

After Smart attempts a reverse layup that gets blocked by Adebayo with 30 seconds left, Stevens called a timeout. He subs Theis back in for Grant, I assume for a better matchup on Adebayo defensively. But that didn’t really matter because Theis ended up getting rocked on the offensive end, being unable to make it back on defense.

So with 25 seconds left in the game, the Heat had plenty of time to tie the game up and have a 5-4 opportunity with Theis on the ground on the other end. They got the ball down quickly as Robinson finds a wide open Dragic in the corner. Tatum attempted to get over but found himself hit by an Adebayo screen. I’ll give the Cs a pass on the first open look because they were down a guy and had to think fast. But, after Dragic missed and the Heat retained possession, the Cs deserve some slander. Tatum and Brown were in good positions to rebound the ball. Tatum needed to box-out Adebayo and Jaylen needed to get the board. Instead, Tatum stopped boxing-out Adebayo to get the rebound and failed. That led to an Adebayo rebound and assist to a Dragic three to tie the game. That was a tough situation, but sometimes it’s the little things like boxing-out that are game changers.

Luckily, FastPP came to save the day in the end, but in a very weird fashion. After Dragic’s bucket the Cs had 12 seconds left to win the game. Brad didn’t call a timeout, which was interesting but he was able to save an ATO look for another day. The Celtics' fate was in Marcus’s hands as he looked at the mismatch he had going against Robinson. He took it to the hoop trying to at least draw a foul. Others may say differently, but that wasn’t a bad look at all even though he was unable to draw the foul. Although looking at the L2M report, they say that Marcus did get fouled by Robinson. So that’s at least three blown calls in the last few moments of the game. After Smart’s miss, Pritchard crashed the boards like he was all game and it paid off as he got the game-winning bucket. FastPP is already making a name for himself in Boston.

The Celtics escaped their rematch against the Heat and find themselves at a solid 6-3. The win was great and all, but the most important part of yesterday was after the game. Both Brad Stevens and players like Jaylen Brown and Jayson Tatum talked about the events that occurred on the Capitol. They demonstrated great leadership and made sure that their fans are aware that people are not treated equally in the United States. They realize that basketball comes second during these important times in society. I'm very proud that these people represent Boston.

The Celtics finished with a win against the Heat, but the focus wasn’t on the game.

Instead, Jaylen Brown and Jayson Tatum took a stand together to inspire change in our country. pic.twitter.com/TtmPSUFSgZ