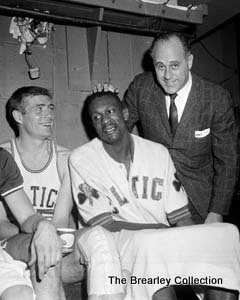 During the Boston Celtics’ 17 banner-worthy playoff runs, no less than 28 first-year pros took to the post-season parquet in pursuit of that brass ring, most recently Glen “Big Baby” Davis … to this day, Red Auerbach’s 1957 Dynasty “Birthers” remain one of only two titlists ever to have started more than one rookie (Bill Russell and Tommy Heinsohn). 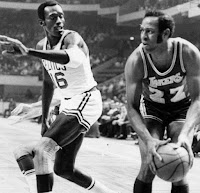 Unlike Bill’s or Tommy’s, many of the names on that list of young champs are underwhelming, if not downright obscure – Benny Swain (1959), Rick Weitzman (1968), Carlos Clark (1984). Several (Don Chaney, John Thompson, Larry Siegfried, KC Jones) would enjoy subsequent hoops success.
Only five of those rookie Celtic champions, however, can be considered to have done the “heavy lifting” involved in earning a professional basketball championship – add Tom Sanders (1961), John Havlicek (1963) and Kevin McHale (1981) to the ’57 pair of aces.
OK now, just what is it that constitutes the “heavy lifting” that distinguishes these five players?
The answer, quite simply, is usage … playing time … a spot in the squad’s regular rotation. 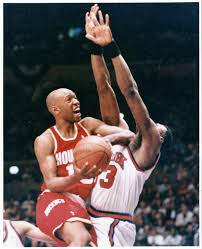 Of course, coaches are notorious for shortening their playing rotation as games become more meaningful, generally preferring to go no more than eight deep. McHale, Hondo, Satch, Russ and Heinie were each among the team’s top eight in post-season minutes played in Season No.1.
Using the “eight-deep” standard, only three rookies have performed this sort of ring-earning “heavy lifting” since – brace yourself! – David Stern assumed the commissionership … no “rotation rookie” has won an NBA championship since 2005 when Beno Udrih gave Pop’s Spurs about 11 playoff minutes per game. [Manu Ginobili (2003 Spurs) and Sam Cassell (1994 Rockets) are Stern’s other phenomenal freshmen.] 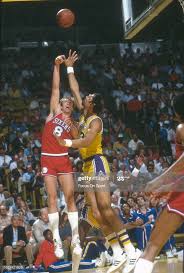 The last rookie to start regularly for a championship team was Philadelphia’s Marc Iavaroni way back in 1983. The only other rookie starters on a title-winning team were Kurt Rambis (1982 Lakers), Magic Johnson (1980 Lakers), Jamaal Wilkes (1975 Warriors) and Tom Gola (1956 Warriors). [I’m uncertain about Red Kerr with the 1955 Syracuse Nationals??]
Since the 1952 Playoffs – the earliest season for which basketball-reference.com provides minutes played – 21 rookie-champions qualify as post-season “rotation” players. The Lakers match Boston’s five members of this club – Magic and Rambis are joined by Clyde Lovellette (1954), Jim Holstein (1953) and Lew Hitch (1952) from the Mikan era. The Sixers/Nats claim four members: Iavaroni, Matt Goukas, Jr. (1967) and 1955 teammates Kerr and Dick Farley. The Warriors (Wilkes. Gola), Spurs (Ginobili, Udrih), Rockets (Cassell), Blazers (Johnny Davis, 1977) and St. Louis Hawks (Win Wilfong, 1958) round out the field.

Abacus Revelation for the Road
On April 23 of 1950, the Minneapolis Lakers captured the first championship of the newly-merged-into-existence National Basketball Association – their third consecutive title under as many jurisdictions (BAA, NBL).
Hall of Famers George Mikan and Jim Pollard, who’d been anchoring the team’s dominant run, were joined in the starting line-up that season by THREE players fresh from college ball – guards Bob Harrison and Slater Martin along with another talented post-man, Verne Mikkelsen (the latter two also bound for Springfield).
Another regularly-utilized (primarily as a defensive stopper, according to Mikan’s 1997 memoir) rookie on those ’50 Lakers was a multi-sport star out of the University of Minnesota by the name of Bud Grant.
Nice to see that a guy who would come to know so much Super Bowl disappointment did indeed earn one glimpse from the mountaintop.