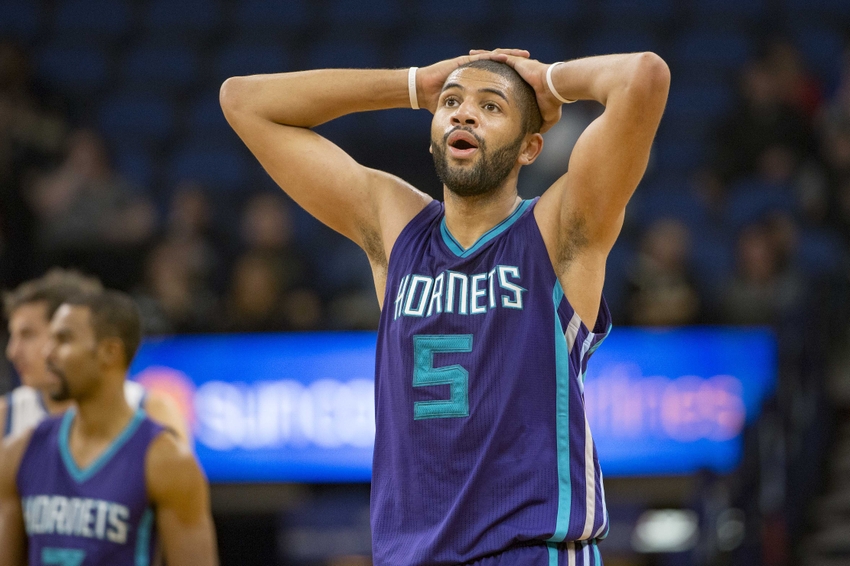 Sources: Boston and Charlotte have worked on a sign-and-trade for Gordon Hayward that would land Celtics a trade exception, but Hornets have first been trying to find a third team for Nic Batum's $27M contract to see if there's a way to avoid waiving-and-stretching his money.

As we immediately wrote on Twitter after seeing Woj's tweet, this is not really new news here. Like the whole world knows that the Celtics are working with the Hornets on a sign-and-trade for Hayward, so that Boston doesn’t lose him for zilch. And everyone is well aware that the Hornets have been trying to dump the the anvil that is Nikolas Batum's contract for quite some time now with obviously no takers.
This is exactly where we've been since this weekend. Celtics trying to convince the Hornets to do a sign-and-trade instead of just signing Hayward outright. For the Hornets they would prefer to not have to waive and stretch Batum. So reading the tea leaves here it seems that these two teams are working together to find a team with cap space that will take on Batum's contract and would be compensated with draft picks for their troubles. This is still not so hot for the Celtics as they'd get a trade exception from the Hornets, which they could then package with draft picks for a player at any point for a year (though often these trade exceptions expire without being used, since NBA trades aren't that easy to pull off).
In this scenario with Batum going to another team, that could mean the Celtics would be "paying" for this trade exception by trading a 1st rounder. But instead of the Hornets getting the pick, it would be rerouted to the team that takes on Batum's contract.
I'd prefer a scenario where the Celtics take on an excess player on a bad contract like Terry Rozier, which allows the Hornets to sign Hayward without having to stretch Batum, and the Celtics would be compensated with a first rounder for doing Charlotte a solid.

Which option would you prefer?
A. S&T Hayward AND a FRP to CHA for a Trade Exception
or
B. S&T just Hayward to CHA & take back Terry Rozier + the remaining 2 yrs on his contract, but also get back a FRP & a smaller trade exception for your troubles? https://t.co/aQR1byQbnT pic.twitter.com/bq6ULnFH64


If you're wondering why Boston doesn't just take Batum back along with a pick, since they need another wing now anyway, well he's not the player he used to be. Not even close. Here are Batum's averages via Basketball-Reference:

He will turn 32 in a couple weeks (Also a reminder to temper down expectations of the recently signed 32 year old Jeff Teague please). If Batum's contract was just bad and not a monstrosity, I'd say just take him back and use his expiring contract in a midseason deal. But we're talking about $27 million. Batum is the guy teams will be interested in once he's bought out, not now.
At this point I think the most one can hope for out of a Hayward trade is if somehow the Celtics get a trade exception without having to kick in a 1st rounder on their end. And yes I know that many people don't care about first rounders, but if we changed that to Aaron Nesmith they wouldn't be happy. Almost all the players on the Celtics that you love were first rounders. People have been asking to trade our picks since the Jaylen Brown draft.
I know many Celtics fans wanted Myles Turner prior to this past weekend, but many of those same people strangely now claim that he's an overpaid bum. Even if his value is lower than first believed and even if it wasn't as high as Ainge wanted (thus him asking for more or other players from Indiana), one still rationally has to believe the Celtics could have still flipped him to another team for a first rounder or two. Then you'd have that Trade Exception, as well as additional first rounders to use with said trade exception to get a better return AND you would,'t be kicking in your own first rounder that it the Celtics very well may have to do in this Charlotte deal.
So hopefully Ainge gets something done here that doesn't involve us kicking in a first rounder. And credit to Danny if he can pull that off. but don't get it twisted, the Celtics would be in better shape if Ainge had agreed to the Pacers' offer last week.

Know this is against the code to say but am willing to admit I was wrong if it ends up Myles somehow went from highly coveted to negative trade value (which I don't buy).

If IND trades him away now & they have to attach a FRP to get rid of him please ask for my mea culpa.

If for some reason we get thrown a curve ball and Batum becomes a Celtic, there are two positives here. While his shooting and scoring dropped off a cliff last season even looking at per 36 numbers, his rebounding and assists per 36 stats were still good. And he's an elite FT shooter. So again he "could" help. Also hearing "And Batum is in for Tatum" or "Tatum is back in for Batum" would be fun.
If for some reason Batum ends up in Boston, here's a positive highlight film: