Daryl Morey: NBA Einstein, or its next Jimmy Hoffa? 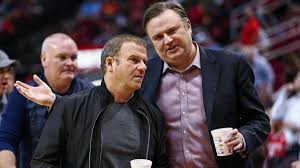 [Forewarning – these thoughts were conceived and composed before any DM to Philly reports.]
It’s been almost a decade now since then-Commissioner David Stern, during the 2011 All-Star festivities in Los Angeles, conducted a meeting with the 24 participants – from old heads like KG & Kobe; including prime-timers like LBJ, CP3 & DWade; to up-and-comers like KD & Westbrook; even a one-hit-wonder like Deron Williams.
With the NBA’s Collective Bargaining Agreement set to expire at season’s end, the Commish had a very simple message for the elite of his labor force … like Mama used to say, “Be careful little hands what you do!” Then Uncle Dave – anyone else remember George Carlin’s “Uncle Dave” comedy (with a message, of course) routine? – punctuated his “advice” by reminding the boys, “I know where the NBA bodies are buried … because I put a few of them there!” [Oscar Robertson and Mahmoud Abdul-Rauf, among others, would hardly disagree.] 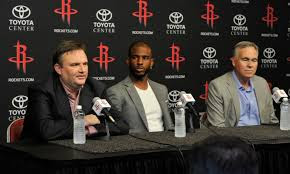 Dead Man Walking
For all practical purposes (and though he was still employed as GM of the Houston Rockets) Daryl Morey’s name was etched upon that particular tombstone about a year ago in one “fell” tweet. [Perhaps he should have “swooped”!] The blade of the guillotine seemed to have made contact last month when Morey announced he was stepping down, his successor already determined to be in-house promotion, Rafael Stone.
Through 13 seasons, four coaches and two owners, Morey’s sabermetrically-sound but revolving-door rosters (which featured 141 different players) were able to produce the Association’s second-best regular-season record. But playoff success proved more elusive, topping out with two runs to the Conference Final (one of them an inspirational showing as their coach Kevin McHale was living out a parent’s worst nightmare, the loss of a child; the other, alas, notorious for a stretch of shooting straight out of the “Ice Age”).
Analysis suggests that the achievement of the Morey-Era Rockets falls squarely into the “average range” – “average” here meaning how a team would perform if success were somehow to be evenly distributed.
But Daryl Morey, wittingly or not, has become the “poster boy” for a revolutionary style of play driven by the notion the THREE is greater than TWO … and it will be for his aggressive implementation of this strategic innovation that he will be remembered in NBA lore. [Unless, of course, he’s doomed to the invisible infamy of a Big O or Chris Jackson – in which case the historical notoriety for this extraordinary transformation will likely pass to the Splash Brothers.]
3PAr or Triple Bogey?
In this matter, the numbers – both league-wide and team-specific – do indeed paint a very clear picture. For instance, the season (2006-07) before Morey’s elevation, the average NBA squad attempted 16.9 three-point shots per game, a usage rate (3PAr) of .213 … essentially one out of every five shots from the field was a three-ball. 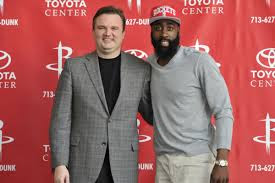 As Daryl steps aside, those numbers have doubled – literally (to 34.1) for 3FGA’s, and virtually (to .384) for 3PAr. [Interestingly, the players’ rate of accuracy has held steady at .358 over that span.]
Curiously (or not?), Morey inherited a squad that had led the league in 3PAr (.290) while placing third in per-game 3FGA’s (23.1) and fifth in 3FG% (.372). The acquisition of James Harden in 2012 and the hiring of coach Mike “Seven-Seconds-or-Less” D’Antoni four years later continued to up the ante until the Morey Men became the NBA’s first (and still only) team ever to attempt more treys than deuces over the course of an entire season in 2017-18, a dastardly deed they’ve now replicated twice more.
In D’Antoni’s first season in Houston, the Rockets had become the first team ever to post a .400 3PAr – this season (just four years later), 30 percent of the league (nine teams) exceeded that standard.
Monkey See, Monkey Do!
Abacus Revelation for the Road 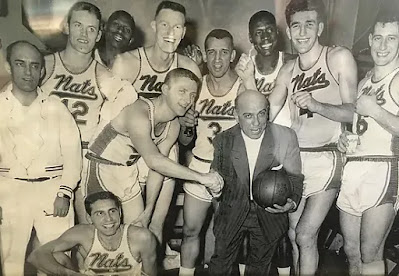 The more traditional accomplishments of innovators in sports often become minimized with the passage of time. Take, for instance, Danny Biasone.
If you recognize the name at all, your association is almost certainly with the 24-second shot clock.
But the Syracuse, NY bowling-alley operator / basketball junkie saw his take-on-all-comers pick-up team become successful enough to join the National Basketball League in 1946 and become one of the NBA’s eight cornerstone franchises of the 1950’s.
Often overlooked about Danny Biasone is the on-court success his team enjoyed. In their 17 years of existence, the Syracuse Nationals never failed to qualify for post-season play, thrice reaching the championship series and capturing the NBA title in 1955 – fittingly, the first season in which that shot-clock was utilized.