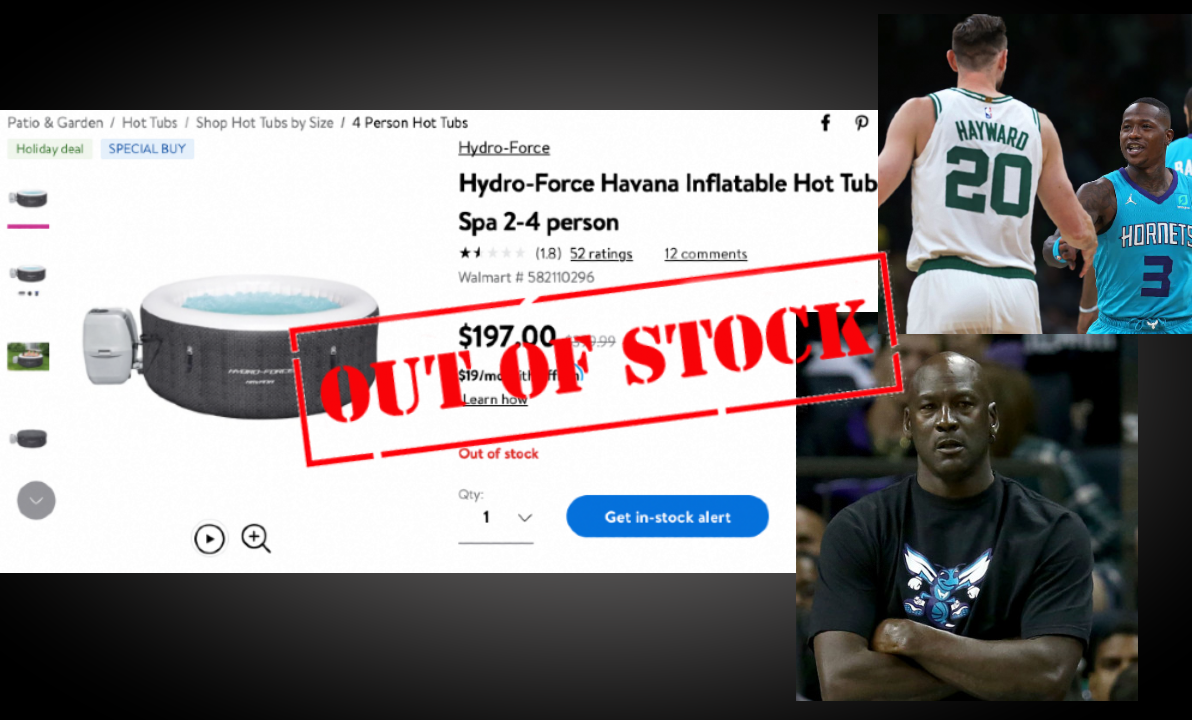 If you've ever gotten excited for Black Friday only to find out that your window to purchase an ipad, gaming system, or inflatable hot tub was extremely limited, you might better understand why it can be true that Indian was Gordon Hayward's preferred location, but he had to take the Hornets' offer. Now some will erroneously argue that Hayward was going to take the greatest amount of cash no matter what, but that sentiment runs counter to his history. He was a free agent in 2017 and the best offer by far for him to take would have been with Utah. Second to that would have been Miami (no state taxes), but he chose Boston.
So why did he agree to sign with Charlotte then? Again if you've ever lost out on a Black Friday deal or any deal for that matter, you can put yourself in Hayward's shoes. He wanted Indiana. The reported financial terms were acceptable to both Hayward and the team. He would be turning down his option year with the Celtics of $34.5 million and replacing that with a 4 year, $105 million dollar deal with Indiana. Now Ainge and the Pacers simply had to work out a sign-and-trade deal. And since the Celtics had no leverage here since Hayward was a free agent, it shouldn't have been difficult. The Celtics take back something of value for facilitating the trade instead of losing Hayward for nothing. Ainge builds up good will with an agent and another team. This is how these things go.

But that's not how it went. Credit to Danny for getting the Pacers to up their offer to Myles Turner, a first rounder and either Doug McDermott or Aaron Holliday, but that still was not enough for Ainge. Doing his Danny thing he wanted to include another team in the deal to offload Turner, because you know no one wants solid young 3-point shooting, shot blocking bigs in today's NBA right? Well Ainge couldn't fetch a king's ransom for Turner from a 3rd team. Ainge didn't like the value that Turner had. That doesn't make Myles a negative asset. It just means that Ainge couldn't flip him for as much as he'd like. 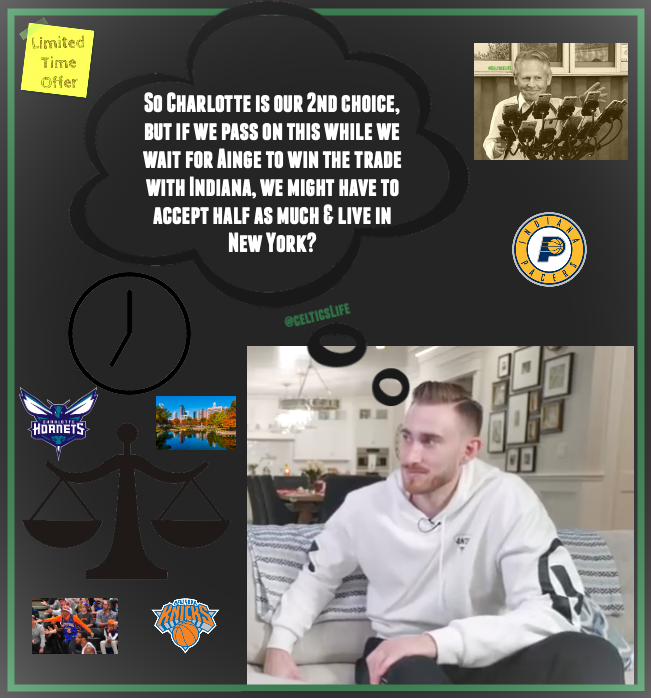 So Ainge continued to haggle with Pritchard and the Pacers, asking for Oladipo (Who Celtics fans were adamant they didn't want prior to a week ago. "Gtfo with 'Dipo. We want Turner!" Now all of a sudden those same fans think Turner sucks.), TJ Warren, and Aaron Holiday. At the same time you had agents doing agent things. In order to get the Pacers to be willing to give up players and a nine figure contract there had to at least be potential other suitors. So you heard about the Knicks, the Hawks, and the Hornets.
Those teams became less and less likely since they knew Hayward preferred Indiana and the Pacers were aggressively trying to satisfy Danny Ainge's trade needs for a player who was a free agent. So those teams went after other players. The Hornets thought they had an offer on the table that reigning 6th man of the year Montrezl Harrell would snag to become their starting center. But Harrell turned down their lavish offer for a small money deal with the Lakers. Of course Harrell has the same agent as LeBron James and the teams that LeBron plays for tend to "take care of" these Klutch sports clients for LeBron.

My outlook on the Hayward/Ainge stuff is pretty simple

Expect Harrell when he opts out of his two year deal next summer to get paid big time. Super shady, but we've seen this before. I mean Udonis Haslem is still getting contracts with the Heat even though he stopped being an NBA quality player many years ago and I don't even think he wears his uniform under his warm-ups. Haslem back in the summer of 2010, walked away from a lucrative offer from the Mavs to re-sign for much less with Miami. it was suspicious at the time and these contracts 10 years later explain a lot.
With Jordan spurned by Harrell, he set his eyes on Hayward. And then he upped his offer to $120 million. So now Hayward was in the Black Friday dilemma. Do you continue to wait for the Pacers and Celtics to agree on players even though they've had weeks to do so and still haven't? At any point in time the Hornets could sign someone else, let's say Bogdan Bogdanovic, and poof that offer is off the table. Hawks could sign someone. Knicks could sign someone. Man this could go south really quick where all of a sudden the Celtics have moire leverage and then maybe you end up going to a lesser Pacers team. You NEED there to be other suitors with cap space. What is taking these teams so long?


Ugh. Please get this trade done Ainge. Shoot your shot on Myles and Warren, but settle for just Myles if you must! 🤞 https://t.co/1yB24AAaVm

You already like Charlotte. I mean you signed an offer sheet to play there in 2013. So while Indiana is your first choice and you are willing to take less to play there, it's not like the alternative is awful. Do we jump on this IPad deal now or do we wait to see if a better deal pops up before Christmas? Whaat about if we pass on this offer and then we can't get an IPad in our budget? Screw it, we like Charlotte and ther are no guarantees that Ainge will ever be satisfied with the return to sign off, so let's take the deal and avoid this blowing up in our faces where all of a sudden we have to take a lesser offer from the Knicks.
Deals can disappear really quick. Let's say you hear about an inflatable hot tub for sale that is going live at 7pm EST Wednesday night. You set reminders to be on your computer before 7pm. Then you read that it went live early and they sold some between 6 and 6:30. Oh that sucks, but it's still listed as going live a t 7. So at 6:59 you start refreshing your browser over and over again. it hits 7 and the deal still isn't live. Finally after copious amounts of additional refreshes it changes at 7:02pm. Changes to out of stock. You snooze you lose and sometimes I guess you don't even snooze and you still lose. Don't ask me how I know about this hot tub story. But if you think Celtics fans were upset about the Myles deal falling apart, you should read the review comments on that hot tub. Lots of pissed off people that were excited about a deal that never happened.

Which option would you prefer?
A. S&T Hayward AND a FRP to CHA for a Trade Exception
or
B. S&T just Hayward to CHA & take back Terry Rozier + the remaining 2 yrs on his contract, but also get back a FRP & a smaller trade exception for your troubles? https://t.co/aQR1byQbnT pic.twitter.com/bq6ULnFH64

I was going to buy an IPad for my mom on Thursday, but the time I got around to purchasing it was out of stock. Now I'll pay more for another. Lesson learned. Hayward might have learned this lesson before. Or someone advising him at least. That MJ deal could vanish at any moment. Take your second choice and go to Charlotte now. Don't put your future in Ainge's hands or you might end up on the Knicks making much less than the Pacers or Hornets offered. In a city you don't want to be in.

🗣️ Who do you agree with here, @KyleDraperTV or @ChrisForsberg_?

(We'd like to nominate @PhilAPerry to moderate all future Celtics debates) pic.twitter.com/XrCsFHIEZU

Look if it makes any Celtics fans feel or cope better if they think Danny Ainge never makes a mistake, or if they believe that any criticism of him is just "hating" then that's fine. Those fans will go with a narrative that Myles Turner all of a sudden became a bad contract. Or Tristan Thompson is better and you couldn't sign him and also trade Hayward for something (Yet somehow the Celtics signed Tristan and are still trying to turn the Charlotte signing of Hayward into a sign-and-trade?). Or there was always a $120 million offer on the table from Charlotte and Hayward was alsways going to take the highest offer (Again this is impossible if the Hornets offered Harrell a lucrative long term deal with their cap space). Or if Indiana wanted Hayward they should have matched the $120 million (If MJ is getting killed for offering $120 million, how in the world could Indiana pay $120 and give up solid young players like Turner, Holliday, and Warren? That would have been one of the worst sign-in-trades ever. Especially with a team that had no leverage).
Again there is no convincing the "Danny Can Do No Wrong" contingent that he in any way should take blame here. But this Black Friday should give rational minds a glimpse of why Hayward chose Charlotte. The Pacers could offer $200 million, but it wasn't there for the taking until Ainge agreed on compensation. Too much risk on that. Hayward wanted an IPad and snagged the best available deal he could (2nd choice for city) before it ran out of stock.

Close to a week later, still no update on the GH to CHA sign-&-trade.

Reminder to keep your expectations within reason. Trade Exceptions are useful when paired w/ other assets in a future trade but often expire unused. Also it appears most teams have stocked up on them this yr pic.twitter.com/jAtGm0gLk0