Rajon Rondo tallied 10 assists to go along with his 16 points in the Lakers 124-114 win over the Heat in Game 2 of the NBA Finals. That list assist moved Rondo in to 6th place on all-time NBA Playoffs assists list. Obviously the vast majority of his playoff assists came as a member of the Boston Celtics. Unfortunately the player Rondo passed on the all-time NBA list was one Larry Joe Bird who played his whole career in Boston.
These all time lists are a combination of skill as well as longevity. And when you're talking playoff numbers they also rely heavily on your team's success. Rondo himself is a major reason the Celtics won enough playoff games for him to tally this many assists. The 34 year old Rondo has also kept himself in great physical shape throughout his career. I'm sure that Rondo also gives due credit to teammates like Paul Pierce and Kevin Garnett for all the playoff wins. And maybe even in the back of his mind Ray Allen. Obviously this year LeBron and Anthony Davis have helped. 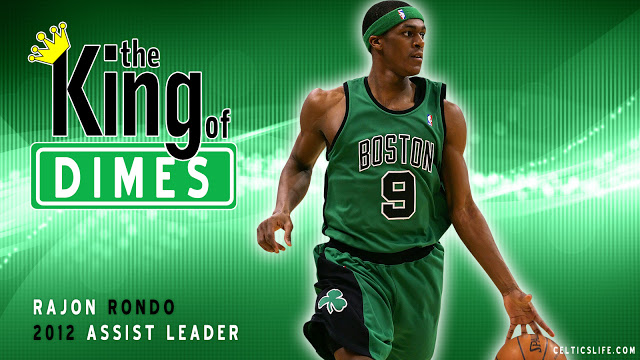 It should be noted that Rondo didn't just tag along for this success. Due to the unfortunate knee injury to Kevin Garnett, Rajon Rondo became the best player on that Celtics team by the time the playoffs rolled that year. Or at least on equal status with Paul Pierce, but if my memory serves me correctly, it was the Rondo vs Rose show in that exciting first round slug fest. Then KG came back the next season not looking like his old self and Rondo led the Celtics to the NBA Finals. Granted the Lakers did a good job defending him in that 2010 Finals, but for the first three rounds of that playoffs many people were saying that Rondo was the postseason MVP of the entire NBA not just the Celtics.

So while it sucks that late career Rondo is achieving this success in the purple and egg white, let's keep in mind that his place on this list still over 80% due to his time in Boston, so we should be proud. I had thought he might crack the top 5 this postseason, but since the Lakers took down the Nuggets in 5 games and look like they will defeat the injury ravaged Heat in short order, he will have to wait until next season to crack the top 5. There is the potential he could end up $4 all-time, but that really depends on how many playoff games he plays in during his age 35 season and onwards.
Also note one more thing about Rondo and how he should receive more credit as an all-time great Celtic; these weren't hard earned assists in his career. These weren't padded assists like a Russell Westbrook or James Harden accumulate in regular season triple double. Or for that matter a regular season Rajon Rondo game. Playoff Rondo like Playoff Dennis Johnson is a different beast. Rondo is all about winning in the playoffs. Again his place on this list is well earned.

In terms of Larry Legend, he had a good run on this list. I believe he was at #2 all-time, second only to Magic Johnson. But Bird wasn't a point guard and he also started his NBA career at an older age and retired at a younger one, so his place on all-time lists were bound to be replaced by point guards and players who played several more years. For example Bird was 23 his first season whereas players like LeBron James and Tony Parker were 19. So we can honor Rajon Rondo today without feeling down about Larry Bird. 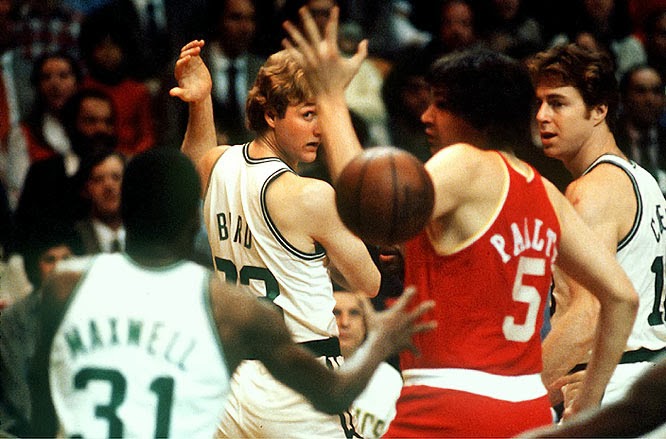 I don't care what talking heads say nowadays, if you watched Larry Bird in the 1980's he was as good as anyone who ever played the game. Yes players with longer careers will have better total numbers. Too often the talking heads concentrate too much on that. Also Bird only had 3 titles, but he had to go up against Magic's Lakers, and the tragic loss of Len Bias was a tremendous blow. Bias was considered the closest thing to Michael Jordan, but taller. Bias' absence also led to Kevin McHale having to play on a broken foot and then never being the same. If Bias lives, I think Bird would have ended up with more rings than Jordan. I honestly due. Again teammates have a huge say in playoff success.
So props to Rondo on the stellar accomplishment. It's fully deserved, but let's not shed a tear for Larry. Celtics fans know that his place on lists doesn't determine just how spectacular he was.