Anyone else shocked (SHOCKED I tell you!) that Daryl Morey and the Rockets are parting ways? 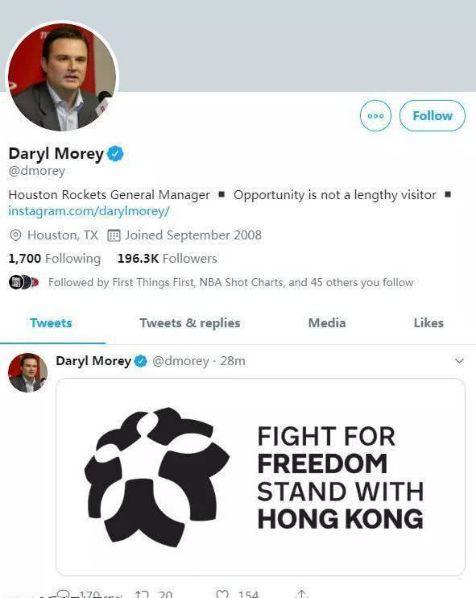 Well less than a week after China announced that they'd start airing NBA games again with Game 5 of the NBA Finals featuring LeBron James, who famously bashed Daryl Morey for his his support of human rights in Hong Kong, the Rockets GM will no longer be employed by the Rockets or NBA. One of those "mutually agreed to part ways" press releases.
Of course with the Rockets losing to the eventual NBA champion Lakers in Round 2, it gave Houston (and the NBA)the cover it needed if they wanted to get rid of Morey. There has been no reports that Morey was forced out. At least yet. Maybe it's just a coincidence.
Morey who worked for Danny Ainge and the Celtics prior to rebuilding the Rockets has failed to lead the team to the NBA Finals. They almost made it two years ago, but Chris Paul's injury allowed the Warriors featuring Kevin Durant, Steph Curry, Klay Thompson, and Draymond Green to come back from a 3 to 2 deficit.
Chris Paul bounced back this season on the Thunder as he tends to alternate injury riddled poor season with quality ones. Russell Westbrook actually fit in pretty well with the Rockets, but he himself got injured in the playoffs which doomed Houston's chances.

Hopefully Morey gets another shot sometime soon. Was disappointed to see Harden, Westbrook and especially LeBron James refuse to support Morey. In a time when people all around the world of many different colors are standing in support of Black Americans, which obviously hits close to home for the NBA which is predominantly Black, it would have been nice if players like LeBron and Harden also stood up for human rights elsewhere.
It's always easiest to stand up for things that directly affect you or don't cause you financial harm. Standing up also for others and for something that's bound to hurt you financially doesn't seem to be in the cards for the NBA and its players currently. One could counter argue that the issues in America for it's Black citizens are time taxing enough to attempt to remedy that there isn't enough time for another's plight, but that doesn't excuse LeBron bashing Morey for his tweet.
With Morey's departure the reconciliation of China with the NBA now appears complete. Both parties can "mutually agree' that is good for them financially.
Related: LeBron James sides with China as he finally speaks on Daryl Morey firestorm NBA bans ‘FREEHONGKONG' from customized fan jerseys Adam Silver reportedly surprised by record low TV ratings for the NBA Finals